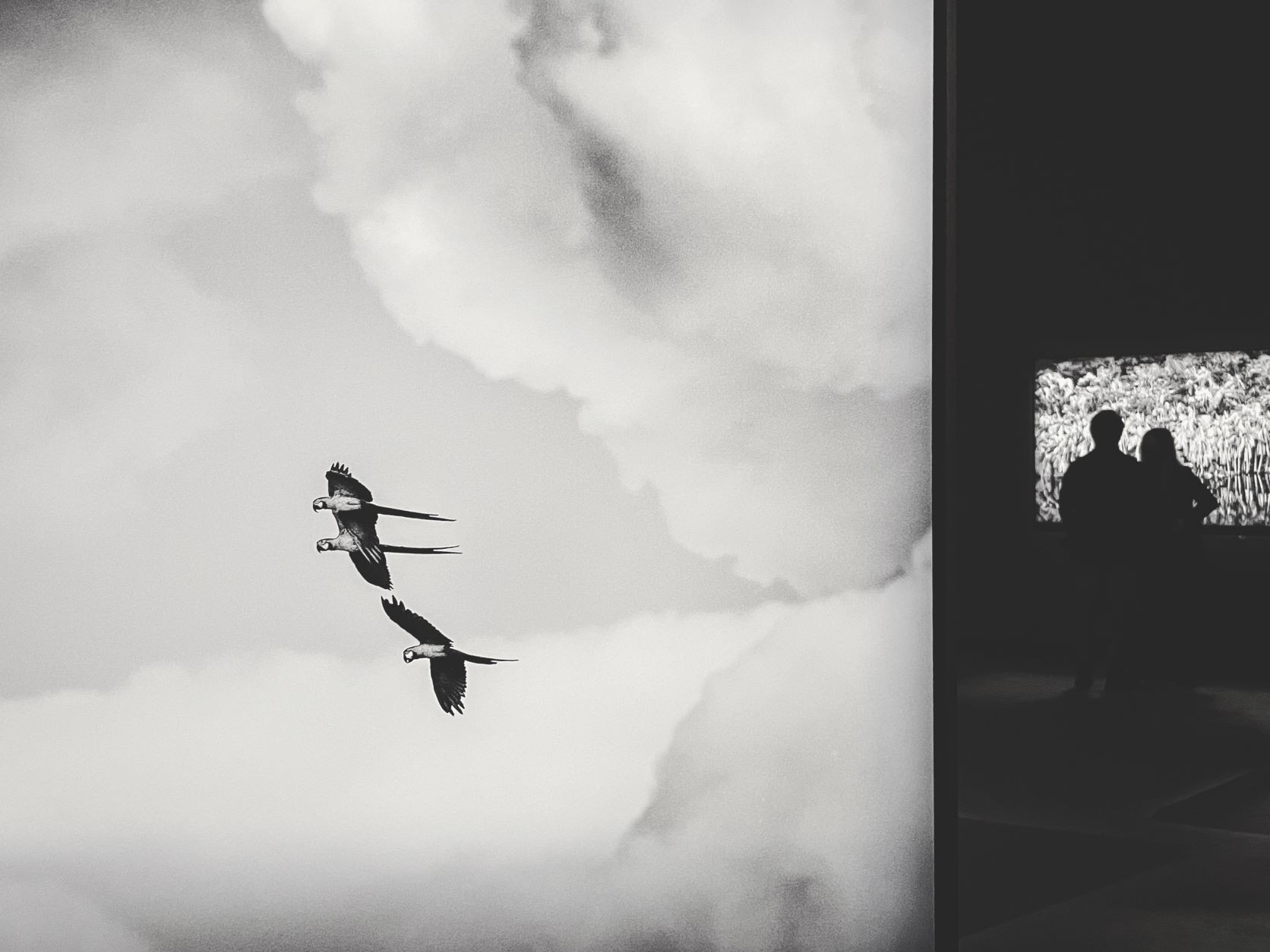 Sebastião Salgado and The Amazon Rainforest in Rome

Sebastião Salgado’s exhibit at MAXXI shows the vulnerability and beauty the rainforest offers and the threats that hinder its regeneration.

For six years, Sebastião Salgado traveled to the Brazilian Amazon and photographed the vulnerability and beauty the revered rainforest offers, a journey that had him amassed more than 200 photographs of trees rustling, birds chirping, water cascading, and tribes thriving. But beneath the surface, the rainforest struggles with the continuous filth nations and capitalists ingrain within its protected lands, a battle between the frailty of the ecosystem that its locals try to conserve versus the get-rich-quick mentality of the people in power. In Salgado’s photographs, he documents the shifts in the rainforest’s state, a call of emergency to save its decline.

Born in Aimorés, the Brazilian photographer started out as an economist with an MA in economics from São Paulo University in 1968 and a Ph.D. in economics from the University of Paris in 1971. During his tenure at the International Coffee Organization in London, he made frequent trips to Africa, and the socio-economic situations communities had to live through piqued his interest in photography. In 1974, he ventured as a freelance photojournalist for the Sygma agency in Paris, a transition point of his career.

Salgado brings his expertise in economics into his photographic works. He captured sugar-cutting workers on a field in Cuba who received special bonuses for every job well done. He caught a Yugoslav Gypsy family trying to enter Italy illegally. He witnessed the Iraqi soldiers whisking the men in every family away from their loved ones for the war. For the exhibit titled Sebastião Salgado: Amazônia at the Museo Nazionale delle Arti del XXI Secolo (MAXXI) in Rome, he reflects on the ecological situation of the Amazon rainforest, from the political ambitions imposed on the territory to the devastation and drought that spring from the exploitations.

Almost a third of the tropical rainforests left of Earth and an abundance of primate species than anywhere else in the world can be found in South America’s Amazon, but the threats it continuously faces hinder its regeneration. In 2021 alone, the Amazon saw a 22% increase in deforestation, making it the most devastating year since 2006 based on a WWF’s report. “Rising global demand for food, especially meat, has led to Brazil becoming the world’s biggest beef exporter, and the second-biggest exporter of soya beans, mainly used for livestock feed. More and more forests are being removed to make way for grazing land or soya plantations,” the findings show, along with the pervading crisis of climate change and the steady clearing for farming, timber, roads, hydropower dams, mining, and house-building, among the other land developments.

Salgado’s photographic exhibit, shown in the museum until February 2022, carves a path to echo the concerns the Amazon faces while giving his audience a platform to reminisce and reflect on the sources of nature that are often exploited. Lélia Wanick Salgado, the photographer’s wife, is the curator of the exhibit. “A photographic exhibition is the visual expression of an idea, a staging designed to convey a point of view,” she introduces. “From the moment Amazônia was conceived as a show, I wanted to create an environment where the visitor feels enveloped by the forest and becomes immersed in both its exuberant vegetation and the daily lives of its native peoples. Along with images presented at different heights and in different formats, the exhibition includes spaces resembling the indigenous housing known as ocas, which vividly evoke the islets of human life in the heart of the jungle.

Monochrome photographs of the Amazon’s environment and tribes are displayed in the dim-lit rooms of the exhibit. “The idea is to have the area in semi-darkness, the lighting focusing on the photographs. The walls are painted in dark gray while the ocas are painted in ocher red. In the ocas, movies show leaders of Indigenous communities discussing their lives, problems, and customs,” Lélia shares. The images evoke both nostalgia and a warning of what is there to revel at today that may as well disappear soon. The aerial view of the Jutaí River winds through the forest in snake-like curves. The Curicuriari mountain, or the ‘Sleeping Beauty Mountains’ among the inhabitants of São Gabriel da Cachoeira, resembles an island surrounded completely by forest.

The Parima Mountains and its rugged terrain house waterfalls such as the Parima River Falls where the stream flows onto the steep wall of a tepui mesa, a geological formation typical of the region. A mythical narrative also visits the exhibit with the story behind the ‘Meeting of Waters’, the name given to the dwelling where the blackwater of the Rio Negro meets the denser, muddy water of the Solimões River. “Because of the different density and temperature of the two flows, their waters run side by side for several kilometers as the mixture evolves gradually,” the show explains.

Salgado also dedicates his photographs to the bodies of water surrounding the continent and the torrential rains that shower upon the lands. Strong winds of the Atlantic reach the continent and blow through the Amazon rainforest and throughout the Mount Roraima area, in the far north of Brazil, the wind collecting the heavy clouds and manifesting the ‘floating rivers’. Fog cloaks over the Urutanin mountain, which reach 2.766 meters, from the forest within the Parima reserve.

The paraná connects the Rio Negro with the Cujuni River. “In Portuguese, paranás are lake-like bodies of water connected to major rivers by canals called furos (punctures). During floods, the two often merge as if the river were widening,” the show describes. Heavy rain conceals the Padre Mountains, part of the Neblina mountain range, in the Maturacá area, a municipality of São Gabriel da Cachoeira. “The rain in the region is so dense that it makes this mountain, in the Imeri range, look like a volcano,” the show continues. Rain and clouds collide, evaporation and moisture coincide. The states of Amazonas, Roraima, and Acre relish the gift of nature and its Creator.

While nature takes the forefront of the exhibit’s reputation, the spotlight glints upon the images of the indigenous tribes that Salgado captured, the photographer’s hint at the native presence being disturbed and disrespected at the expense of global consumerism and demands. Salgado braved his way through photographing the tribes of Xingu, Awá-Guajá, Zo’é, Suruwahá, Yawanawá, Marubo, Asháninka, Korubo, and Yanomami, with him and his wife accompanying every image with a slice of their history to feed the viewers with knowledge on the communities being left out, and at time repressed, to pave the way for a modern society.

Wandering around the exhibit of Sebastião Salgado pulls the viewers into a state of reflection about a sensorial experience, climate change, and how our actions and decisions influence the indigenous tribes. Lélia Wanick Salgado has summarized the show’s mission at its core: “While it may be illusory to think we can reproduce the sensations felt in loco in the rainforest, we hope at least to convey a small part of the magic of the Amazon region and its native peoples to visitors, offering them an intimate experience that they can stay with them after they have left the exhibition.”