From Rossi to Cinquanta: A Look At Italian Last Names

There are more than 300,000 Italian surnames. What do they mean? 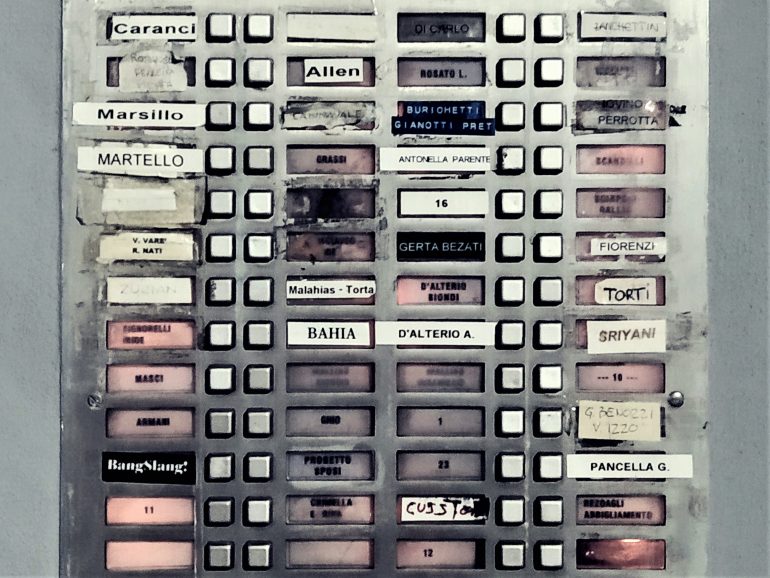 A buzzer in Italy. Photo: Photo by Daniel De Nadai on Unsplash.

There are more than 300,000 Italian surnames. What does yours mean?

Like other aspects of genealogy and family history, the origins of last names or surnames can be murky or lost altogether to the sands of time. While the Ferraris and Bianchis of the world are easily deciphered, other names are not so effortlessly retraced. Many last names that still exist are sourced from lost dialects, corrupted slang, or simply words that have been largely forgotten. A couple years ago I came across a well-worn copy of Joseph Fucilla’s Our Italian Surnames, published in 1949. Ostensibly the first comprehensive look at Italian cognomi, it has proven to be an invaluable source when I encounter a last name that is uncommon. Seeing that members of my family carry a last name which is highly provincial and curious to outsiders, it seemed appropriate to dedicate an article to the hows and whys of all things family names.

Anyone who has done a bit of research into last names is aware that they are a relatively recent societal development. In Italy, Venetian nobles began to utilize hereditary surnames between 900 and 1000 A.D., and the practice slowly filtered across the peninsula and down the social strata over the next several centuries. Some parts of the country did not adopt last names until much later on in the 1800s, including isolated spots like the island of Elba. As surnames became commonplace, those expressing paternity took the lead. It was natural for a man to take the name Giuseppe d’Alberto, as it meant he was Giuseppe, son of Alberto. Over time, his descendants gradually modified the name to Degli Alberti, or simply Alberti. Other ways of showing a link to family ancestors included such as names Fibonacci, with Fi meaning ‘sons of’, and -eschi in Brunelleschi, signifying ‘followers of Brunell’.

In quick succession — likely because patronymic names became quite difficult to differentiate — surnames were adopted related to the personality traits or physical characteristics of individuals. Negri or Rossi would have been chosen by those of dark hair or red hair, Volpe or Lupo by those who showed cunning or strength. Topographic last names were adapted by others seeking to distinguish themselves, perhaps most famously in the cases of the da Vinci and d’Assisi clans. But these examples are merely a drop in the Italian surname bucket. One estimate claims that Italy boasts upwards of 300,000 varieties, which may be the most on the planet. It is difficult to determine with any accuracy whether this is true, but what is inarguable is the creativity of a culture that has legitimately accepted last names like Tavola (table), Lumachi (snails), and even Pizza.

Perhaps one of the most intriguing categories of Italian last names are those indicating undesirable qualities, something unheard of among surnames of English heritage. In his book, Joseph Fucilla notes that “Undesirable characteristics in the guise of surnames have for the most part started out as nicknames.” Even accounting for cultural differences, it is still astonishing for an English or American reader to encounter last names like Ubbriachi (drunken), Puzzolente (smelly), or Pirillo (a loser or sucker). Leading channel Rai 1 famously featured a family on the talk show Le amiche del sabato in 2010 with the last name Mastronzo, which in polite terms means ‘a piece of fecal matter’. The members interviewed admit that life was difficult for them while in grade school with the constant teasing that occurred, but that they have no problem with their surname now. Carmela Mastronzo, one of the six Mastronzo siblings, manages a clever remark during the piece, saying “Io Mastronzo di cognome, tu di fatto!” (I’m a piece of sh*t by surname — you’re actually one!)

Returning to the curiously provincial last name I mentioned earlier, it seems as though it has several meanings. Mezzasalma can be translated as ‘half of a salma’. What is a salma, the reader may wonder? Well, it was an archaic unit of land measurement primarily used in Sicily, roughly equaling 37,000 square meters or nine acres. Seeing that the vast majority of families with the Mezzasalma name are concentrated in Sicily, specifically within the province of Ragusa, it does not seem too bold to assume that their ancestors were involved in the agricultural production of a local product such as tomatoes or olive oil. Owning a mezza or half salma was not something to be particularly proud of. There was a saying in Sicily about “un uomo da mezzasalma,” a man lacking resources, land, and thus, status.

However, the anecdote does not end here. Growing up, I learned from family members both in the United States and Italy that Mezzasalma has a darker and more derogatory association. The word for corpse in Italian is also salma, so seeing the name Mezzasalma causes many Italians to smirk or feel disgust over the idea of a dissected dead body. Regardless of the bullying and even shunning that they experienced in their younger years living in Northern Italy, I believe that most of my relatives feel a sense of pride in having a name unique enough to generate instant reactions.

As this article concludes, I encourage our readers to research their last names on sites like Cognomix and post their findings in the comments section below. Who knows what you might discover?