The Problem With Men’s Fashion

Men’s fashion needs a major overhaul — so get going Italians. 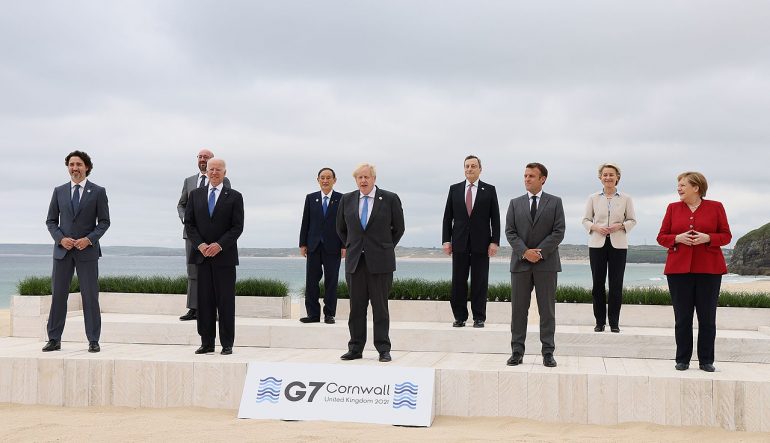 A family photo of the G7 leaders at Carbis Bay. Photo: 首相官邸ホームページ, CC BY 4.0, via Wikimedia Commons.

Who tailors the suits of these leaders? Ursula von der Leyen looks fine, cute even, and let’s just say that Angela Merkel has never been a fashion plate but she at least looks reasonably put together. But what about the men? To a one they look sloppy. There is a static cling problem between Michel’s socks and trouser legs, Suga’s entire suit is too big, Draghi’s trousers need a good pressing, and Biden needs the entire pant leg reworked. You would think Trudeau would have gotten it right since he is a relatively tall, young and good looking guy, but he is as much of a mess as the others. But by far the worst are Johnson and Macron. They both need their trousers shortened by an inch or two, just to start.

And this is the main problem in men’s fashion today — the point where the trousers meet the shoes. What do you do with it? In short, the pants are too long. Something about the idea of having a ‘break’ in one’s trousers needs to be rethought. It might look okay for a moment in the tailor’s studio, but somehow it fails in daily wearing, and it certainly does not photograph well. In fact, what you often will see in fashion photography is the model leaping into the air, so that shoe, sock and trouser leg are momentarily suspended, hanging in an elegant equipoise for just a split second, because you know that once the model lands, it will all go to shambles, the trousers puddling around the shoes as we see in the G7 photo. If even the leaders of the most powerful nations in the world cannot get this right, what hope is there for the rest of us? And we can hardly have them all leaping into the air on cue; just getting them all together is hard enough, and I don’t think Biden’s knees could take the abuse. I doubt Johnson could even get off the ground; but who knows, he could be one of those chubby but energetic types.

American fashion designer Thom Browne has proposed a solution by raising the cuff completely off of the shoe by several inches and even by sometimes disposing of the need for socks. It is a radical proposition and very few tailors and their customers are willing to go there. The problem is that the look reads historically as ‘nerdy’ and perhaps has its roots of shame in boys and men who were either too poor, too intellectual or too indifferent to their appearance to keep their pants legs maintained at the right length, either just kissing the vamp or breaking cleanly with a sharp crease. In fact, this last point might be a clue to the problem evident in the G7 photo: our political leaders are not maintaining a sufficient crease in their trousers.

I was at the tailor shop just the other day, in a medium sized town, the capitol of a small Italian province, to get a new pair of jeans adjusted. It was in fact a merceria, or haberdashery or notions shop, a place that sells cloth and yarn and buttons and things like that, and so not a proper tailor shop at all, but the woman who ran it kindly agreed to hem my jeans, and I decided to take her up on her offer and end my search then and there. She led me to the back to an ersatz changing room where I struggled out of the clothes I was wearing and pulled on my jeans, turning up the bottoms as best as I could. When I walked out to have the length adjusted and pinned, the woman let out a quick laugh as soon as she saw me. It is always uncomfortable having someone crouch down to your shoe and fuss with your pants. I suddenly return to being ten years old and having my mother do the same thing. I was at her mercy so all I could do was trust her and agree with whatever she decided to do. “Va bene così,” she said, no question mark appended. “Non riesco a ricreare l’orlo originale.” “Oui oui maman,” I silently replied. At worst, I figured, I would look like everyone else, and that was about as good as I was going to get for my six euros. I doubt that she had any real interest in how I looked, viewing me more as an overgrown boy who just had to be turned out as quickly as possible than as someone who cares about his appearance.

And I think this is what is going on in the G7 photo. All of those men could look better than they do: more put together, more tightly tailored, more body conscious. But there is something wrong with that for men, especially world leaders. Nipping in the waist (Biden, Suga, maybe Draghi — I am looking at you; Johnson — we’ll just leave you as you are), slimming the leg, and raising and tightening the cuff would result in a sexier and sportier look that just does not read well in current men’s fashion. To be serious, apparently, you have to look dowdy, or perhaps the word ‘schlubby’ is the more masculine word. With all of the talk of gender neutrality, you would think men would be freer to dress in a more elegant way, but apparently it does not work that way. I say we invite Måneskin to the next summit to see if that has some good effect.

So what do you say, italiani? You must have a solution for this problem. You can’t possibly think that Draghi and his cohorts look good. I have bought enough Italian clothing to know that if I am not squeezing into my trousers and being hugged tightly by my jacket, that a quick shake of the head and the command to take a size smaller will follow. Your prime minister could very well be the new leader of Europe. Now’s your chance to exert your influence on him and for Italy to exert its influence on political fashion. Italian shoes are too beautiful to have them covered up by sloppy trousers.

The other problem is that of the blazer. Here too the rule is more about concealing than accentuating, namely a man’s bottom, in a deeply biological and anthropological way, if fashion historians are to be believed. And what is going on with la cravatta, that wonderful gift to the world from Croatia? I will have to take these items up in a future article.