Cicchetti Are The New Tapas

These Italian-made finger foods have the potential to replace tapas in the international gastronomic imagination and panorama. 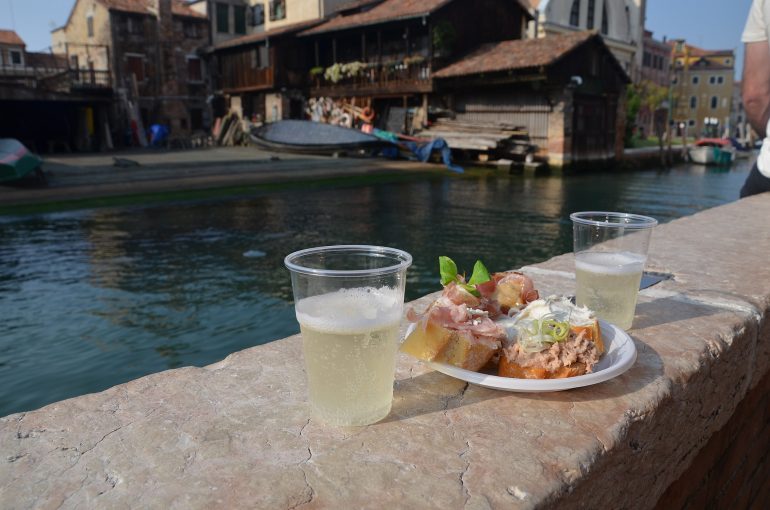 Cicchetti and prosecco overlooking a canal in Venice. Photo: Monika Ďuríčková, CC BY 2.0, via Wikimedia Commons.

If you have ever been to Italy, you know that Italians are very attached to the ritual of aperitivo. A glass of wine, some chips, some finger foods, and a table full of friends represent the right mix for a winning aperitivo.

This tradition, well-rooted in the Italian culture, originated at the end of 1700 in Turin, more precisely in the liqueur workshop of Antonio Benedetto Carpano. To this man, in fact, is owed the invention of Vermouth, a fortified wine more refined and aromatic than the red wines circulating in Piedmont at that time. The story tells us that Carpano began to prepare and serve this new beverage by uncorking small one liter bottles, pouring the content to his customers — usually workers at the end of their work shift — in small glasses. This way of serving small quantities of alcohol at a time gave birth to the social trend of aperitivo. Over time, this practice has evolved and today the composition of the aperitivo varies according to the place and region where one goes.

Venice and its traditional cicchetti

There are some areas of Italy where the cultural tradition of aperitivo represents the ‘most sacred moment’ of the day: we are, of course, talking about Veneto. In this region, especially in Venice, it is common to ‘go on a bacaro tour’ and have Venetian cicchetti. Bacaro is the term used by locals to indicate the typical Venetian tavern where it is possible to find a selection of wines and drink, at any time of the day, ‘un’ombra de vin’ (a small glass of wine) accompanied by tasty cicchetti, considered the equivalent of Spanish tapas. The term, which in Venetian dialect means snacks or small tastes, has been used since 1200 to indicate these gastronomic specialties. At that time, in fact, the Serenissima was one of the major centers of trade, and merchants used to meet in the streets near Rialto and Saint Mark’s Square to conclude their business. One of the customs of the many merchants and travelers passing by once an important business deal was concluded was to toast with a glass of wine served in the shadow of the bell tower — from here comes the expression ‘shade of wine’ — accompanying the drink with a tasting of offal cooked in wine and put inside paper cones.

Today, cicchetti — also called spunciotti which in dialect means ‘to prick’ with a toothpick as they are designed to be eaten with the hands — are generally made of bite-size crostini with sliced salmon or creamed codfish on top, various fried seafood such as sardines and calamari, skewers of squid or prawns, little sandwiches with cured meat, codfish on polenta, meatballs, fried mozzarella cheese sandwiches, and crispy vegetable tempura. These finger foods are customarily matched with a glass of prosecco, typical of the area, or spritz (a wine-based cocktail made with bitter liqueur), prosecco, and sparkling soda water — a classic aperitivo drink now famous all over the world.

Over the centuries, the Venetians have made this culinary preparation a true art form, as cicchetti can be customized and designed by chefs according to the products offered by the region and the season. Moreover, some places in the city, such as the cocktail bar Grancaffè Quadri, also offer gourmet and starred versions of these snacks. On their menu, for instance, it is possible to find a version of the traditional mini-Venetian focaccia with red tuna tartare, seaweed, and caviar. Therefore, the main idea of tradition and simplicity linked to this style of cooking is preserved, even if today it is more and more linked to creativity and genuineness of selected ingredients. Besides, according to some gastronomic experts, the tradition of cicchetti originated before that of Spanish tapas.

Both cicchetti and tapas represent a unique way to taste food since a wide variety and choice is offered to meet and satisfy the tastes of even the most refined palates. The common denominator of these two gastronomic traditions is the use of typical products of the Mediterranean area, assembled and mixed together to create delicious single-portion dishes to be, preferably, accompanied by an alcoholic beverage — beer or sangria in the case of Spanish tapas. Both cicchetti and tapas are also both symbols of a decidedly informal and convivial way of eating, meant to be experienced standing up or sitting at a table with friends.

The future of world gastronomy

We can well hypothesize that cicchetti, and the idea behind them, could really become the future of food all over the world: an art that is to be admired and tasted. After all, it is said that a dish is eaten twice: at first with the eyes and then with the mouth.

What’s more, these Italian-made finger foods really have the potential to replace tapas in the international gastronomic imagination and panorama, especially if they are linked to the idea of Venetian style aperitivo or to the concept of apericena. In a nutshell, apericena is the term to indicate a reinforced aperitivo that has become popular in Italy since the 2000s. Many bars and pubs, in fact, have created evening events that gave the opportunity to access a buffet, with a drink included, for a small price in order to meet the needs of the customers and the hectic life of the city. This habit has become a real fashion, a social ritual, especially among young people, that has come to replace dinner. In addition, this true social and culinary experience is meant to be an authentic moment of sharing, a way to invite people to take some time for themselves, to live slowly, carving out some time for socializing.

Spending time with friends, having a break from the daily routine, talking about vacations or future projects — or even complaining about the devilish boss after an exhausting working day — combines a human side with the playfulness of being able to eat with your hands and to taste combinations, sometimes unusual, of products related to the territory. Furthermore, as already mentioned, the creation of cicchetti starts from local products, and this can really be a great advantage both for the customer and for local companies and producers. For customers, it offers the possibility of not spending a lot but consuming genuine ingredients, while for producers it increases their ability to sell their kilometro zero products, avoiding transporting too many goods that would surely raise the price and impact environmental sustainability too.

The art of cicchetti has great potential, and could be really successful if exported internationally and adapted to each country.

The COVID-19 pandemic has certainly changed our habits, but during the lockdown millions of Italians, although forced to stay at home, have not abandoned this ritual, but instead modified and adapted it to the situation. Not being able to meet our friends face to face, we met up with them via video call, each with a glass in hand and our own cicchetti prepared in an amateurish way with what we had in the fridge.

Cicchetti could represent a new way of making aperitivo in the post-COVID where both the young and older generations have fun and fully appreciate the joy of being able to meet in person again. After pasta, pizza and tiramisu that are known and appreciated everywhere, cicchetti could take Italy one step further in exporting a new excellence of Italian gastronomic heritage that is not only linked to taste but to a culture of hospitality, quality, sharing, and conviviality too. As they say, Italians do it better!