His works may resemble the contemporary graphic designs seen these days, but a peek at the dates will tell a different story. Even then, Fortunato Depero projected the future in the historical past. 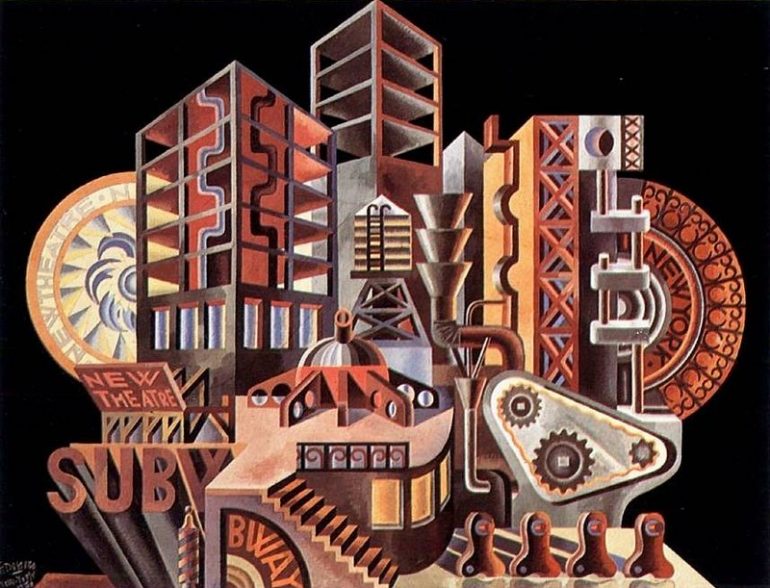 Two pairs of XX appear on the poster: the first pair falls into the background in black color while the second moves into the foreground bearing two orange palettes to accentuate their shadow and width. Above them, the words SECOLO XX dangle over, cut in half where the upper portion swerves to the left as if forced to dance by an invisible wind. Looking at the bigger picture, a spotlight, unseen from the canvas, seems to blast its light from the left part and forms the gray background where the XX hover. The image may resemble the contemporary Italian graphic designs seen these days, but a peek at the date of this work will tell a different story: Secolo XX (20th century), no. 10 (1929). Even then, Fortunato Depero projected the future in the historical past.

“The art of the future will be powerfully advertising art,” Depero wrote in the early 1930s. Today, studies argue that the inclusion of fine art in advertising leads to positive product evaluations through luxury perceptions, and no surprise nestles within this statement as advertisements influence 90% of consumers to make a purchase, based on the 2017 Clutch report. Depero’s words echo the truth, and during his artistic journey, his works as a painter, sculptor, and set, costume, and, above all, graphic designer, remain relevant today in the contemporary realm of graphic design.

Depero formed part of the Italian Futurism, an artistic movement originated by Filippo Marinetti in 1909 that rejected the past and celebrated a number of abstract concepts like speed, machinery, violence, youth, kinetic energy, duration, simultaneity, and industry. Circles, diagonal lines, curves, shadows, and singular strokes define movements, embossed over a multitude of colors that overlap with the designs. If not these depictions, science fiction-like imagery accompanies distorted figures of buildings, spaceships, and flying superheroes.

The graphic works of Depero, a student of the Italian Futurist Giacomo Bella, hold a sense of Italian Futurism that, at the same time, differs from the rest of his circle. The relevance of his graphics pinpoints the elements of contemporary graphic designs, which include the reflection on and use of color, shape, texture, framing, and typology, to name a few. His warped shapes and gray shadows act as production conveyors for boxes of oranges and lemons, not forgetting to draw a boxy human figure climbing a citrus tree inside the factory in his Arance e limoni, 1927. His Grattacieli e tunnel (Skyscrapers and Tunnel), 1930 portrays buildings as leaning on one another and with stairs on their upper half. Behind them, mechanical suns and moons glow in the bask of the night. Below them, underpasses overview the future, time-traveling machines humming in the evening.

Modern Italian graphic designers and artists — such as Fernando Cobelo, Riccardo Guasco, and Francesco Poroli — express their pastel-hued and dim-shaded figures and shapes on their canvas, often with the use of technology. Their style, however, can also be found in Depero’s design whose painting technique, produced from a broad process of multispectral imaging, included watercolor, tempera sketches, and drawings. While their imagery preserves the funky and frenzied fame of graphic designs, Depero’s works resulted from his belief in Italian Futurism, his projection of the future from his time in the past, and, unknown to him, his influence in the Italian contemporary graphic design and art.

When Depero died in November 1960 at the age of sixty-eight, he left a trove of artworks artists and art enthusiasts today may consume. In an article by Fabio Belloni on the artistic recognition of Depero’s works, the author states a reason Depero’s legacy was only recognized after his death. “This can be fairly easily explained: for the public of the day, Depero was not an author endowed with the same dignity as was attached to other Futurists. He was not Umberto Boccioni, nor Giacomo Balla, nor Gino Severini, nor even Carlo Carra. This explains why — with the exception of acquisitions by Gianni Mattioli — his works did not find their way into the most important private collections of the era. Depero’s canvases, tapestries, and sculptures are missing from the holdings of Milanese collectors Riccardo Ducker and Emilio Jesi, just as they are absent from the few but noteworthy international collections of Futurist works, such as those of Lydia Winston Malbin in the United States and Eric Estorick in England.”

Now that contemporary Italian art has started recognizing Fortunato Depero’s works — noting his memorable work with Campari, among the others — divulging into the unconscious repercussions of his historical artworks from the present perspective is no longer out of reach.