Dialects, Languages And International Schools: Different Ways To Be Bilingual

Bilingual schools prepare children for a new globalized market. But what about Italy's already strong history of native bilingualism? 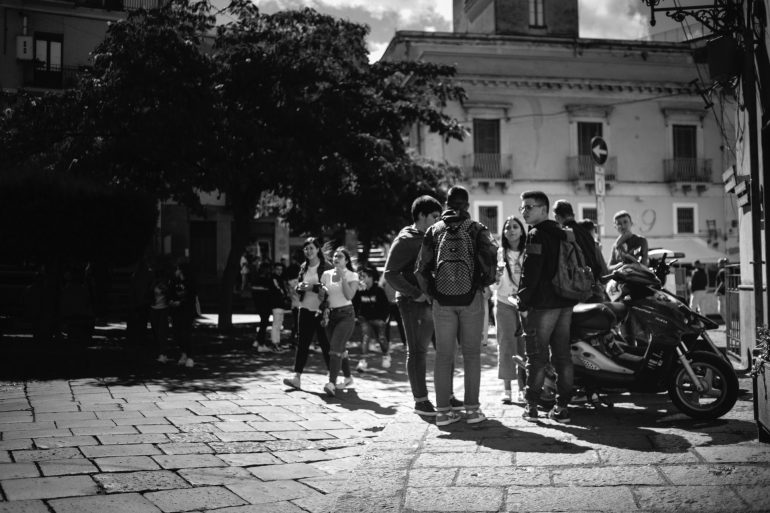 Meeting the needs of — and preparing children for — a new global market, bilingual schools are flourishing all over Italy. But how do they fit with Italy’s already strong history of native bilingualism, in which many children have long spoken a dialect at home? How do the two ideas reconcile?

We speak to bilingual Italians across the country and abroad for their perspective.

It’s not always known that Italy boasts over 34 spoken languages and dialects. Most, such as Sardinian, Sicilian, or Neapolitan come from Vulgar Latin — just like other Romance languages such as Italian, Catalan, Romanian, French, or Spanish. Other dialects are closer to Germanic, Albanian, or Slavic languages, as they have received the influence of neighboring countries.

After all, speaking in dialect was long the norm for everyone in Italy. Modern Italian — once a dialect itself — was modeled after Tuscan and Florentine, and was formalized by writers that we’ve all heard of, including Dante. But today, depending on the region where the ancient dialects are spoken, there may be seen a socio-cultural fracture that separates it from modern Italian.

Let’s take Neapolitan for instance. Whether considered a language or dialect, great works of literature have been written in Neapolitan, it contains fixed grammar rules, and it demonstrates different registers of language, even slang. It’s the mother tongue of many — and you could say that a great number of Neapolitans are born bilingual.

Yet, despite this, every school follows the curriculum mandated by the state, which bypasses the possibility of formally teaching Neapolitan to students. And that’s even though it is a UNESCO-recognized language.

Bilingualism between Italian and a local dialect is part of the lives of many, yet it is still not yet recognized as something noteworthy, helpful, or important. Rather, it seems to many like something that needs to stay at home, that’s not welcome in the outside world of work and formal society.

How do dialects fit into the educational landscape today?

Giovanni is 30 years old. He grew up in Rome, before moving to Bari to attend high school. His whole family is Barese, but they never spoke the dialect at home. At school, however, it was the first language of many of his classmates. They would speak it to one another in class and at break. The teachers would sometimes shout out a “sciamaninn!” (let’s go!), but thanks to the curriculum, they would switch to Italian promptly after.

Countless studies have proven that children who speak two languages or dialects have high cognitive and logical skills — and there is evidence it might help to reduce the risks of dementia. Yet, history and socio-economic dynamics have excluded local dialects from the potential profits of bilingualism. After all, no one speaks those languages outside of Italy, the logic goes — and when considering globalization and the dominance of English, they might seem useless.

Yet, many American-Italians who were first or second generation spoke Sicilian or Barese — as is the case with Giovanni’s family, for instance — but do not speak Italian. It might not necessarily help them in the global job market but it does offer an exceptional gift: that of knowing one’s roots and heritage, the vocabulary and melodic rhythms of your ancestors. Because cultural transmission, after all, is part of language learning and it exists beyond bilingual schools.

An investment for the future

“I hope this will help expand their opportunities.”

This is Anna. She is the Rome-based mother of two primary school pupils, an eight-year-old boy and a six-year-old girl whose native language is Italian. They are currently enrolled in a school where they study a great deal of English, but also French, Spanish, and German. The goal is to give them a certain linguistic global awareness, so they might one day be able to study in a foreign country. More and more Italian parents choose to enroll their children in a bilingual school or an institution where the study of languages is pushed forward. Those are mostly private schools but the public sector is definitely catching up. There are currently 36 IB (International Baccalaureate) World Schools in Italy, all of which teach in English, and this is not counting the high number of independent schools or multilingual programs.

Italy is slowly pulling ahead of the pack when it comes to teaching English. Since 2012, all lower secondary pupils are taught the language, compared to 89.1% in 2005. Italy joined the ranks of four other European countries who teach English to every pupil: Denmark, Malta, Sweden, and Germany. But this does not mean that the quality of the classes is outstanding, as that depends on the regional resources and the teaching body of each school. Yet, it does push parents who wish to prioritize language learning to enroll their children in private bilingual schools. In big cities, their numbers are exploding.

Take Alessandro. He is the father of a little girl. Her mother is Russian and his daughter communicates freely between Italian and Russian with her relatives and friends. She attends a private international school, just outside of Rome, where her teacher is a native speaker of English. The hope for such schools is to prepare the children for global markets.

A great number of Italians choose to either study or work abroad if they can — either pushed by the economic challenges Italy brings or fueled by a need to access new opportunities. The trend of bilingual and even trilingual schools is a new thing, belonging to a new generation. In the past, international schools that did exist were really expensive and reserved to children of ambassadors. They exist still today, but plenty of family-run and smaller structures have now opened, allowing a greater range of children with various backgrounds to attend. They are also no longer seen as schools for the children of expats, as Italians are also seeing the benefits of such an education.

Regional representatives are catching up and offering great initiatives to promote bilingualism in the public space too. This is the case with the region of Emilia-Romagna, where Hear English is a three-year agreement that has been signed between the region and the University of Bologna. Toddlers and young children from the age of zero to six years old will be exposed to English in public schools in an initiative launched in 2021. Around 76 infant-toddler centers and preschools in Emilia-Romagna expressed their wish to participate in the study phase. The goal of the project is to have two English-speaking centers and daycares per sub-region in Emilia-Romagna.

The desire behind this initiative is to democratize bilingualism for all families and make it accessible for all. The landscape is slowly but surely changing.

There are different ways to be bilingual

Back in Naples, some individuals have decided to teach the beautiful Neapolitan language formally — to foreigners living locally or to anyone willing to learn. Napulitanamente is an initiative for children and adults who will attend afternoon classes to learn the pronunciation and diction of the dialect and some elements of Neapolitan history and culture too. The initiative attracted great interest from associations that promote the rediscovery of European regional languages — and it may reopen the debate of teaching regional languages in schools.

While parents and a new generation recognize the importance of English for work, local initiatives have not forgotten the perks of keeping dialects alive. After all, the intellectual advantages are very similar: greater vocabulary, adaptability, and enhanced learning capabilities when it comes to learning a third language later on. Speaking a dialect at home and learning Italian at school in a formal way certainly prepares the ground to learn a foreign language one day. They are not mutually exclusive and there are many ways and many reasons to be bilingual.