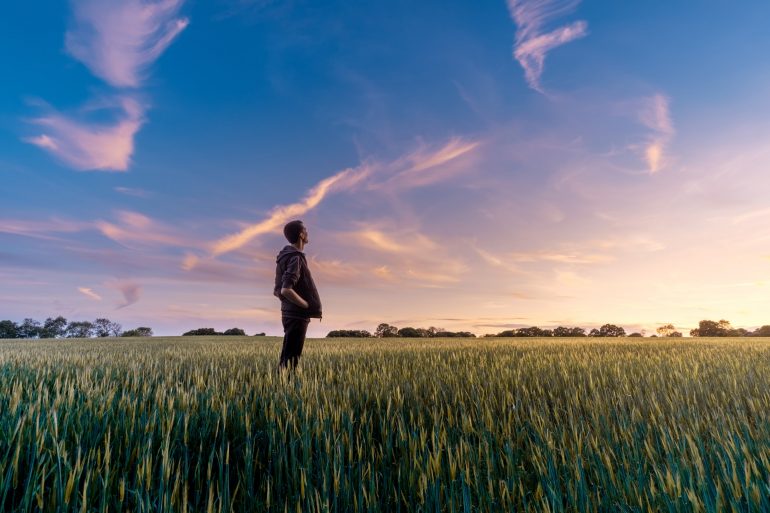 A man standing in a field. Photo: Benjamin Davies on Unsplash.

The concept of food sovereignty comes into its own in movements that promote transparent trade guaranteering a just income to all peoples and the rights of consumers to control their food and nutrition. It refers to the right of communities, peoples, and states to independently determine their own food and agricultural policies.

More generally, the idea of food sovereignty raises the question of which type of food production, agriculture, and rural development should be pursued to guarantee food security for the world population. The modernization of food supply chains — together with the implementation of agricultural policies focused more on the production of commodities than on food — has led to the marginalization of local food systems over recent years.

From Italy to South America, the fight for food sovereignty is at the center of movements to provide local management of food sources. For example, agroecology moving towards sustainable modes of agricultural production is vital for future food security and an essential component of the right to food. States should support the adoption of agroecological practices by supporting decentralized participatory research and the dissemination of knowledge by relying on existing farmers’ organizations and networks or indigenous communities.

In a context in which commercial pressures on land are increasing, it is crucial that states strengthen the protection of land users by adopting anti-eviction laws, by improving the regulatory framework concerning expropriation, and by reforming the distribution of lands in order to better support smallholders.

In Italy, research has demonstrated that agricultural land is changing, being concentrated under the control of a small number of large-scale farms or companies. The values of these lands are disconnected from their actual use, as land is valued speculatively for business purposes or else seen as the future site for the production of renewable energy, affecting also the natural resources associated with the land, such as water and biodiversity. It moves away from a more localized system, in which resources are exploited less without alienating people from the countryside, and the result is to further widen the gap between rich and rural areas.

Using land is a right, as it can help provide sustenance for our communities — and it is right that its use be scrutinized properly. One recent example in the municipality of Narbolia in Oristano province which put renewable energy in conflict with biodiversity was the planned solar greenhouse plant — consisting of 107 thousand solar panels — for agricultural production. This construction plan was halted to understand if building such infrastructure was worth the damage it would cause to biodiversity, and if the land could be put to other, more sustainable use.

The case of South America

Across the Atlantic from Europe, South America is the home of the Earth’s lungs. The life cycle of the planet could not continue without the synergy that nature has created between air currents, plants, soil, and humans.

South America is also the cradle of movements of resistance to climate change and opposition against those who exacerbate the global climate emergency. The agency of indigenous peoples, custodians of ancestral cultures that respect the complex balances of ecosystems, are the first victims and the first to raise the issue of the right of peoples to decide on food policies and the management of natural resources.

To understand the role of indigenous leaders in the fight against the exploitation of their lands, it is necessary to keep in mind both the colonial past and more recent history. The expropriation of land, the depletion of natural resources, and the irreversible pollution of entire areas of interest by intensive farming and cultivation have been taking on dramatic proportions for decades.

Already in the 80s the problem was perceived in Latin America in a pressing way, so much so that small farmers and indigenous communities rose up and formed La Via Campesina, in response to those problems which, according to farmers’ organizations, NGOs, and CSOs, lead to the abandonment of smallholder agriculture and to hunger and poverty in rural areas. The majority of hungry people are food producers themselves. For this reason, smallholder farmers must be considered to have the main role, politically, economically, and socially.

The eradication of hunger and malnutrition is an achievable goal only by with a revolution of the present paradigm. It’s necessary to improve coordination among sectors, such as agriculture, education, governance, and governmental and NGO actors — from Italy to South America and beyond. This is the only way to guarantee adequate nutrition, food sovereignty, and the full enjoyment of the right to food.