Contemporary art installations light up the city from November to January as an open air gallery for all to enjoy. 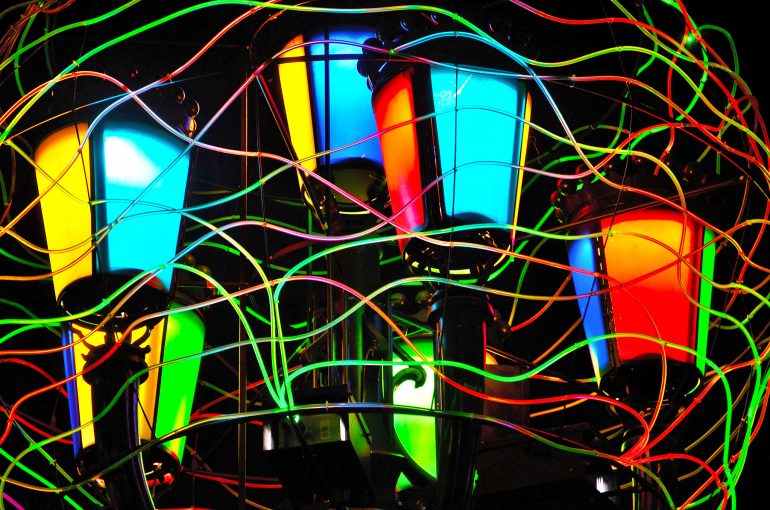 Every year in November, Turin goes into contemporary art overdrive with a number of exhibitions ranging from Artissima — and its edgier cousin Paratissima — to Luci d’Artista, creative light art installations that are much more than just Christmas lights. Actually, they aren’t Christmas lights at all, so we’re told. It has to be said, the themes aren’t particularly Christmassy. For example, Migrazione (Climate Change) by Piero Gilardi is a composition of pelicans migrating in flight across Galleria San Federico, just off Turin’s main artery Via Roma. It lights up the space in a fusion of blues, yellows, and reds. While definitely not a Christmas theme, the pelican is said to be a Christian symbol of Christ sacrificing himself for man. Conceptualized here, and with an even obscurer reference to climate change, Gilardi has highlighted the damage humans have been enacting on our planet through this illumination that was originally created in 2015. Maybe Christ shouldn’t have bothered, is perhaps the point being made here.

Despite the subtle messages that conceptual light art has the power to deliver, everyone loves lights at Christmas, so it’s hard to take Christmas out of the lights. They invoke the spirit and joy of the season from New York to London, where the Christmas lights ‘switch on’ has traditionally been a big event with celebrities, soap opera stars, and I’m A Celebrity winners in the UK, for example, paid thousands of pounds to flick a switch. Turin’s big ‘switch on’ though is performed with more modesty and decorum, although others might simply say we’re stuffy up here. The official inauguration ceremony, at the end of October, was behind closed doors at the Gran Salone dei Ricevimenti in Palazzo Madama with the mayor and official sponsors, including Fondazione Torino Musei, in attendance.

Luci d’Artista appear to the public without much pomp or ceremony, or perhaps most people are too distracted to notice the exact date. The lighting coincides with Halloween and All Saints’ Day when people are out and about enjoying the city: kids dressed up for Halloween, artfully dressed window shoppers strut their stuff, teenagers hanging around outside Bershka, the toasty smell of roasted chestnuts, craft stalls selling artisan clothes and jewelry, and cafes packed with beautiful people and tourists sipping thimbles of coffee and nibbling on tramezzini under outdoor heaters while watching the world go by. Simply put, the end of October is a good time to switch on Luci d’Artista because it kicks off the holiday atmosphere leading up to Christmas.

I asked people what they thought about Luci d’Artista, and a lot mentioned that they create “a lovely Christmas atmosphere.” They do run through the holiday season and get switched off again on January 9, which is just at the end of the Christmas holidays. But, as any good conceptual artist knows, the idea that the lights are only for Christmas is all in our individual perception. Luci d’Artista make a statement, they alter your mood, they create communities and blur the boundaries between the works of art themselves and the public that admire them. Art becomes part of the architecture, creating immersive experiences where you feel the space in compellingly different ways — depending on the kind of day you’re having, who you’re with, and what you’re doing. Are you just walking by or are you here for a break, to pass some time, or are you a tourist?

Reactions range from disinterested criticism to appreciative or awe-filled enjoyment. “They’re nothing special,” one of the teenagers I asked said with a smirk. “They’re so-so,” said another. “They’re just Christmas lights,” a teacher I know said. Going on to point out that “Turin has always had great lights so I don’t know what the fuss is. In the 80s and 90s, Via Monginevro used to be decorated with hundreds of illuminated angels. Luci d’Artista should be more like a show, rather than just lights. They’ve been the same for the past twenty years,” he added disdainfully. Other comments, short and sweet, ranged from “pretty” to “nice,” and then “beautiful” and “excellent.” A friend of mine said, “Luci d’Artista are important for Turin because they attract visitors and it means that more people are encouraged to come to the city. It’s an attraction.”

Some lights not to miss

I agree. They are an attraction and you can feel that there is a kind of buzz and excitement in the air in the period when they are switched on. They make people happy to hang out and go for a walk downtown on cold winter nights. Let’s look at some of my favorite from the creative illuminations on display this year.

Cosmometrie by Mario Airò are geometric patterns and symbols that light up on the ground in Piazza Carignano as dusk falls, evoking the decorative design of a carpet inspired by both Western and Middle Eastern tradition. Airò is inspired by the writings of Giordano Bruno, Italian philosopher, poet, and cosmological theorist who was burned at the stake in 1600 for his idea that the universe is infinite, and the philosophies of humanist and astrologer Marsilio Ficino who was influential in the early Italian Renaissance.

Tappeto Volante (Flying Carpet) is the work of Daniel Buren, French conceptual artist and affectionately dubbed ‘the stripe guy’ by those who know him for his trademark in red, white, and blue striped light boxes. Tappeto Volante is an impressive architectural work, and a local favorite, evoking the French flag and suspended on hundreds of parallel steel cables above Piazza della Erbe, the square in front of Palazzo Di Città, Turin’s City Hall. Buren gained notoriety in the 1960s by covering billboards and metro stations around Paris and Los Angeles bus benches with ‘posters’ of his famous French motif stripes, conceptual statements that challenged traditional ideas about art.

Almost everyone’s absolute favorite is Palomar. This year it adorns the length of Via Po, the street that suits it best, and where it was first displayed in 1998 when Luci d’Artista was inaugurated. This grand work by Genoa-born Giulio Paolini, is inspired by his signature geometrical drawings and focus on components and space. Palomar is centered around an ancient astronomical atlas surrounded by orbiting planets that are inscribed with geometrical shapes and the profile of an tightrope walker balancing in a circle as he juggles rings in his hands.

A more playful and empathic work, Ice Cream Light by Vanessa Safavi honors her travels in Italy. The Berlin based artist of Iranian, French, and Swiss descent typically explores ethnography, alienation, and identity as her themes; the fire to her creative impulses gained from her extensive travels around the world. Ice Cream Light is both a symbol of Italy and the simple pleasures in life but unfortunately this year, is installed away from the center in Piazza Livio Bianco.

Piccoli Spiriti Blu is an evocative work by German visual artist Rebecca Horn, usually famous for her rather eccentric body modification pieces. The transparent, floating, ethereal blue rings of this installation envelope Turin’s Monte Dei Cappuccini all year round. Lighting up at dusk they create a sensory experience and beautiful auras of light that cut through the November fog swirling spookily around the Po River.

Luci d’Artista: art for everyone

Lights are an accessible art form for all and Luci d’Artista turns Turin into an outdoor theater, set against the city’s eclectic backdrop of Baroque and Liberty style architecture, with people as the participants. Themes are borne of places, people, literature, and culture, combining East and West influences — some quasi-religious, experiments with line, color, form, angles, and shadows, public art slogans — all triggering different emotions, some positive, some not.

Ironically, the lights with the clearest Christmas theme, Vele di Natale by Vasco Are, with its geometric patterns inside fluorescent light tubes forming quirky Christmas trees, has been placed this year in Piazza Foroni, the heart of Barriera di Milano. This working class district, famous for its Millo wall murals of happy people exploring their urban area, is receiving a gradual facelift. The spotlight is on the way the light art challenges us as well as the challenges this area faces. Concept over Christmas is the message. And one final comment from a frequent visitor to the city that sums up Luci d’Artista perfectly: “Beautiful without being overly Christmassy.”