Nothing much happens during the passeggiata, but that nothing much is plenty. 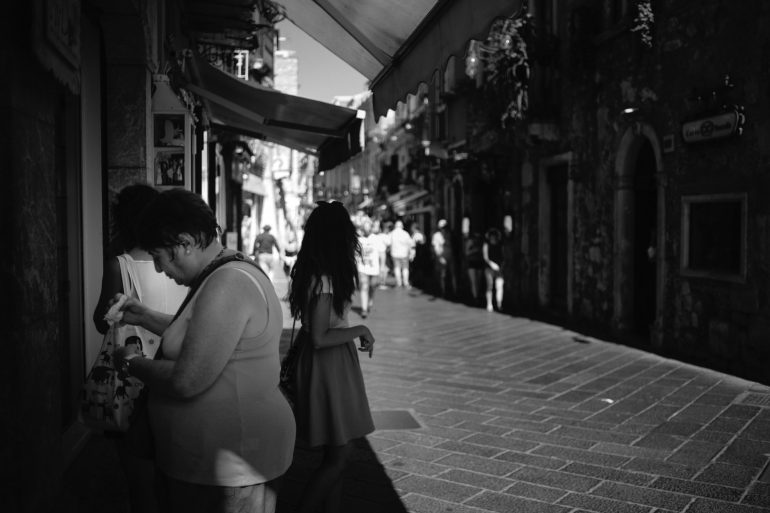 People standing on sidewalk in a Sicilian town. Photo: Myznik Egor on Unsplash.

I once spent an entire summer in a small town in Sicily and it was there, one evening, that I caught a glimpse into la passeggiata that theretofore had escaped me. The other times that I had witnessed it were typically in medium sized cities, and the feeling there was something you would experience at a free concert in the park or some similar event in a typical American suburb, with many small groups of people — couples, families, groups of friends — who would gather for a couple of hours in public, with maybe a band playing and beer being sold and consumed in red plastic cups. The difference in Italy of course is that you are more likely to be having a gelato than drinking, and if you are drinking, it might be a small glass of wine or something similar, and there probably will not be a central event. In Italy, the passeggiata, a kind of loosely organized but informal public stroll, is the event itself. Nothing else happens except that, but it is plenty.

What I saw that night in this small town in the interior of Sicily was something different still. The town did not have a piazza, per se, unless you were to count the relatively small space in front of the local church. It so happened that it was perched at the end of the main street, which had a slight grade to it, with the church at the high end. Along the street were the usual collection of storefronts — caffè, bakery, optician, laundry, newsstand, butcher, with a small supermarket at the bottom of the street. Interspersed among these were a few private clubs where men would gather to play cards, have a drink, and discuss the day. It was an especially lively and functional little town, well equipped for its size, and with a measure of social capital that would make most Americans gasp in wonder. The school’s end of year pageant boasted production qualities and a level of participation that I had never experienced before in a similar venue, or to put another measure on it, it was the kind of place where the entire town would come to your funeral when you passed away.

But let’s go back to the passeggiata. All of the usual things were happening: the gelatos, the tables outside of the caffès, the knots of people who knew each other standing or slowly walking together up and down the street, chatting, relaxing, catching up. Several couples were well in evidence, typically heartbreakingly beautiful girls with their proud boyfriends who would stand behind with their arms wrapped protectively around their ragazze. Nothing in particular was happening. It was just a warm summer night and people were out enjoying themselves.

But as I stood taking in the scene, I noticed something that I had never seen before. A couple of young girls, aged twelve or thirteen, were walking down the street on the other side from me, away from the church and toward the supermarket, to help put some orientation on it. They seemed to be two friends as they walked more or less together but not necessarily close to each other. They were definitely together but they did not seem to be chatting or interacting with each other in the more casual way that I noticed in everyone else. They were very nicely dressed in light colored summer dresses that were feminine and a bit more elegant than the attire that I saw on the other people around me. They walked with their chins held high, their hair billowing behind them, as if they were on parade, and it seemed that they were loving every second of it.

Then I saw something really interesting. Two boys, younger but perhaps the same age given the difference in growth rates between the sexes at that age, trailed several paces behind the girls. They were definitely shorter, although just as skinny, and their behavior was radically different. While the girls were clearly out to present themselves to their fellow residents, the boys seemed to not have a clue about what it was all about or what they were supposed to be doing. They were spinning and clowning around, kicking at things they saw in front of them, rocking back and forth as they made their way down the street, always maintaining a distance between themselves and the two in front. Every once in a while they would catch sight of the girls and straighten up, stop goofing around, and effect a somewhat serious demeanor, as if remembering that they were there for a reason, unclear and as uncertain as that seemed to be.

As far as I could tell, the boys had been enrolled to serve as the escorts for these two pretty girls who were debuting their new status as young women, I suppose, presenting themselves for the first time, during this transformational summer, to an admiring public, in the best and probably only place to make such a debut in such a small town — la passeggiata. The boys, instead, did not seem to have an agenda and seemed unsure exactly what the were expected to do, other than rebelling against the long sleeves on their ill fitting shirts. Undoubtedly each one was there as a safe pair of hands, presentable and plausible as escorts, but absolutely unthreatening. They were clean and cute in the way of teen or preteen pop stars — fresh faced and more or less prepubescent, not yet exhibiting any of the manifestations of masculinity or sexual maturing that would have posed a potential for trouble. Who knows, maybe they were the girls’ younger brothers or a brother and a classmate, two cousins maybe.

Of course, the girls were completely unbothered by the slack attention that the boys showed them. They continued to make their way down the street — ceremoniously, beautifully — two pastel spirits gliding placidly through the dusky evening.