Pizza’s ubiquity is matched only by its adaptability. 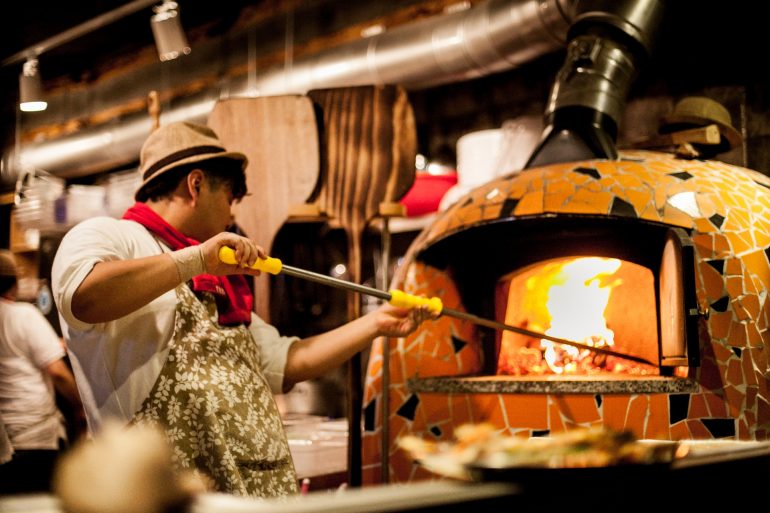 There are reasons why gold and not some other metal became a standard unit of wealth, reasons that have to do with its attractiveness obviously, but also with its availability, its durability, its ductility and so on. No other substance has a better combination of properties than gold when it comes to making coins.

I think something similar is true of pizza as a comestible item. Pizza is in fact the most popular food in the world, and with pasta, Italy has the first two places on the popularity list locked down. But I want to talk about pizza today because pizza, like gold, has qualities that pasta and other similar offerings do not, and this gives it a special purchase on the world food scene.

In an earlier piece, I wrote about a pizza place in Sweden, of all places, one that I think was run by Romanians. Whether they were a family or just a group of associates, I am not sure, but what struck me is that they chose to serve pizza. Who knows, maybe the restaurant was a pizza place previously and the new owners merely bought the business and continued to run it in its present form, but it does not matter because either situation supports the claim of the primacy of pizza as a restaurant offering.

And I am wondering why that is. Let’s start with the pizza itself. It is, as any trained pizzaiolo will tell you, principally bread. The crust is not the base for what the pizza will become with subsequently added toppings; the crust is it. The crust is the pizza. And being principally bread, pizza has a good start in the food popularity game. Bread is popular all around the world for a number of reasons: wheat is nutritious, palatable and affordable, and most people like it, conversations and concerns about wheat intolerance, celiac disease, and the infelicities of carbohydrates aside.

A second positive feature of pizza is its high adaptability. A wide range of meats, cheeses, vegetables and even fruits can be used to top pizzas, thereby allowing for a virtually infinite combination of ingredients that make it possible to serve a pizza that appeals to practically any taste.

But these points explain only part of pizza’s appeal. Why, for example, do sandwich places not occupy the top spot? Like pizza, they are principally bread and so share all of the advantages that bread as a foodstuff confers. Like pizza, they are also infinitely adaptable to almost any taste given the wide range of ingredients that can be used as toppings or fillings. The Swedish tradition of smorgasbord comes to mind. Why are not smorgasbord restaurants as populous as pizza parlors?

Well, for one, pizza is served hot, which people tend to like. Two, it is communal or at least easily shared, given its harmonious geometry, making it highly conducive to gatherings but equally scalable for a table of one. Three, it is highly portable. I think it is impossible to talk about pizza without talking about it as a takeout item or one that can be delivered to your home. Four, it is economical, both to make and to eat, so it fits into a business model that does not require a great deal of capital investment on the part of the restauranteur nor a significant financial outlay on the part of the diner. Five, and I may get a little pushback here, it is a cuisine that is easy to learn. On this point, I might buy a little peace by comparing it to the guitar, an instrument that is easy to pick up but difficult to master. Good pizzaioli deserve to be recognized for their hard earned skill.

Shall I go on? You can eat pizza with your hands — not something you can do with pasta at least not in our current culture, although that was indeed the way in which pasta was originally sold on the streets of Napoli. Well, you might say, you can eat sushi with your hands, which is again in fact the traditional way to eat it, so not with chopsticks. But sushi features fish, which is expensive and relatively difficult to procure and prepare, and fish has limited appeal, and even sushi without fish has not attracted the same level of appreciation as pizza.

So are these the reasons why immigrants, Italian or not, open pizza places? To be fair, some open donut shops, at least in the United States, and you do not need to have the donut in your cultural matrix to open and run a donut place. Donuts and donut shops are certainly popular, but they do not constitute a meal, and even as a confection they suffer from bad press from nutritionists, thereby perhaps limiting their appeal and therefore their distribution.

You would think the ranks of wheat and lactose intolerant consumers would limit the popular expansion of pizza around the globe, but that does not appear to be the case. Perhaps it is because, one, the problem of lactose and especially wheat intolerance is overstated and two, you can make pizza without cheese and even without wheat, or more precisely, without lactose and gluten. You can make donuts without sugar — the most troubling ingredient — but beyond sweetness they hold little appeal, and the structural properties of sugar are often hard to replicate with other forms of sweeteners. And again, you cannot have donuts for dinner.

So I think it makes sense for a group of Romanian restauranteurs to settle on pizza, even in Sweden. However it has gotten there, it has snagged the top spot in world food popularity, and by virtue of its infinite variability, it is the ideal dish to be enjoyed either by a single diner in serial sittings, just as I did when I was flying regularly for work, or in a group where each diner can choose the kind they like, with the option of sharing among the members of the group as desired.

In effect, pizza has become not only global but also universal; that is, not only can you find it in virtually any place around the world, but you will find it in these places in versions that suit the tastes of individual diners. In other words, pizza goes with anything and anyone. Its ubiquity is therefore matched only by its adaptability.

So does this mean that we need to talk about pizza as a product of Italian culture? We do, but it will have to wait for a future piece.