After debating a measure that would have outlawed homophobia, the road to full civil rights in Italy looks even steeper. 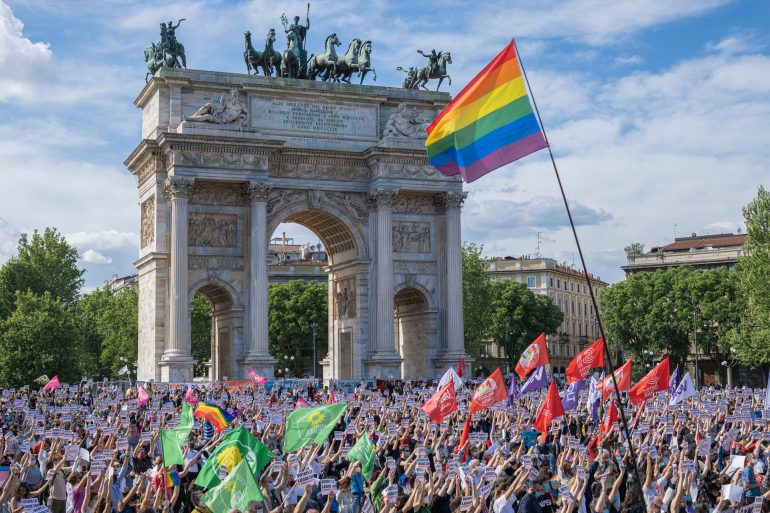 On October 27, the Italian Senate scrapped the so-called DDL Zan by 154 votes to 131, as far-right parties Fratelli d’Italia and Lega put forward a motion to block the legislative process. Following approval by the lower house in November 2020, the bill — proposed by the MP Alessandro Zan from the Partito Democratico (PD) — would have paved the way for greater rights and protections for the LGBTQ+ community in Italy. Instead, it has been trounced by a fierce opposition of the right and by several turncoats from the majority coalition.

What is DDL Zan?

So, what did the DDL Zan aim to do? Beneath the right’s hysteria about “gender propaganda,” the bill had simple aims.

Firstly, and most importantly, the Zan bill would have amended the section of the penal code punishing hate crimes and discrimination. That part of criminal law, dating back to the “Mancino Law” of 1993, currently bans discrimination, violence, and hate crimes born of racial, ethnic, national, or religious motives. The draft law aimed to add new motives to the list: sex, sexual orientation, gender identity, and disability. As a result, acts of discrimination on such grounds could have landed offenders an eighteen-month prison sentence or a €6,000 fine. Violent crimes, meanwhile, would have met with a four-year sentence instead.

More controversially, the bill would have provided for the introduction of a national day against homophobia, lesbophobia, biphobia, and transphobia to promote inclusion and fight intolerance. It was this that inspired most of the opposition.

Fierce hostility to the bill

The reference in the draft law to gender identity triggered opposition from the Catholic church and right-wing politicians. Yet, these forces also resented the introduction of an alleged “crime of opinion” that the law proposed.

The opposition put particular stress on the idea that, under the law, expressing opinions supporting the traditional structure of the heterosexual family could lead to prosecution for hate. The fact that this wasn’t true didn’t stop senators and the right-wing media from getting very worked up. Notably, the Vatican took the extreme step of lodging a formal protest to the Italian government, claiming that the bill would have breached the Lateran Treaty that defines the relationship between Italy and the Vatican.

In particular, the Holy See asserted that the law would have put under fire not only the clergy’s beliefs but also the ideas taught in Catholic schools. According to the bill, every school needs to plan events on a national day against homophobia, lesbophobia, biphobia, and transphobia. This point faced vehement opposition since many declared that the law would have paved the way for supposed “homosexual propaganda,” whatever that may be.

In response to the Vatican’s intervention, many politicians flexed their own muscles. Prime Minister Mario Draghi, for example, reminded everyone that Italy is a secular state and that Parliament is free to carry out its own activity.

Of course, the truth is that allegations against the law themselves represent mere regressive propaganda. The DDL Zan bill provides for a clause protecting free speech. In this way, the draft law would have outlawed behaviors harassing LGBTQ+ people, yet campaigning against gay marriage still would have been lawful. Of course, the right-wing knew this. Meanwhile, an agreement on schools would have represented a reasonable compromise among heterogeneous political forces.

Instead, now, the legislative process is in a dead-end situation. Although the Senate’s rules technically allow lawmakers to propose again the same draft six months after it has been scrapped, the truth is that political interest in the issue is fading. The election for the new President of the Italian Republic in January 2022 is already bringing a staggering level of anxiety among all parties — particularly as Mario Draghi, the ruling Prime Minister, is allegedly leading the race for the office. Regardless of who will sit in Sergio Mattarella’s chair, the situation will inevitably be turned upside down.

A poor record on LGBTQ+ rights

As a consequence of the Senate’s vote, the state will not grant other minorities the same protection that the existing law allows for racial, ethnic, national, or religious motives. Those that make the cynical claim that current regulations already cover violence against LGBTQ+ communities are simply wrong. The reality is that we are far behind other European countries in terms of protection for minorities.

In fact, Italy took the 35th spot in Europe for policies safeguarding LGBTQ+ people. The most striking data is that, between 2020 and 2021, one LGBTQ+ out of four has received threats. According to many commentators, the failure of DDL Zan may make this situation worse.

While harassment and crimes against LGBTQ+ people continue to snowball, institutional Catholicism, far right-parties, and a persistent masculinist culture are stymieing any meaningful discussion of the issue. Absolutely, the country needs a law punishing hate and violence on the grounds of sex, sexual orientation, gender, gender identity, and disability. Yet, the truth of the matter is that we need more education on the matter as well — ideally free of the right’s propaganda that doesn’t reflect the majority of the Italian population.

In the end, the Parliament showed further grim proof of incompetence. While right-wing senators broke into disgusting applause after stopping the bill, the majority blamed former Prime Minister Matteo Renzi and his political force as responsible for the outcome. In all this, the general public, of which about 60% favor the bill, lost the chance to be heard by short-sighted partisan politics.

We are disappointed but not surprised.