No matter how much nutritionists recommend eating fish, it remains for the most part unpopular, and I think there is some wisdom in this popular unpopularity. 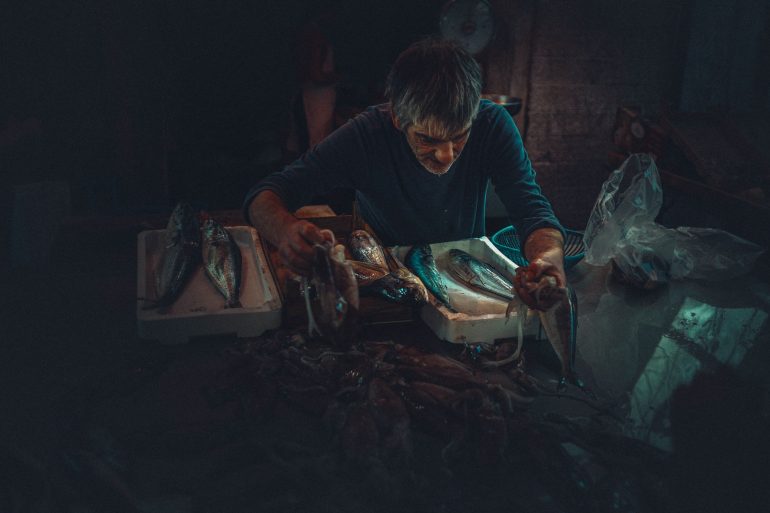 I do not mean to pick on Italian fish stands in particular — I find them all to be mildly disturbing and I do not like walking past them. Maybe it is the great variety of fish that I tend to find in the Italian markets; maybe it is their lurid colors, but whatever it is, they make me uneasy. I can in fact trace my uneasy relationship to an encounter I had in the Castello quarter of Venice, a district that forms part of the coda del pesce, which is an irony or a harmony that has worked its way under my skin, and one that I have not yet been able to reconcile or resolve.

Fair enough, I am a vegetarian, so anything related to dead animals puts me off, but something about dead fish in particular, the look of shock on their faces, their orderly arrangement on a board, makes me feel witness to a massacre, and one that bears the added perturbation of murder done not only on a mass scale, but with modern industrial efficiency and bureaucratic organization. Somehow, the lamb’s head, eyeballs still in place, is easier to pass off as a singularity. The fish fields do not allow a similar negating denial.

But it is not just that. The flesh of fish rots more quickly than does that of mammals. So even if I put my animalist sensibilities aside, my vegetarian délicatesse, and so regard the fish only as a consumer, I still feel waves of anxiety wash though me every time I pass a fishmonger’s table. There is not much time for these vendors to move their goods and the ticking stopwatch, the countdown to expiration, is palpable. I can even feel my heart beating in my chest as my pulse quickens and a sweat breaks out on my forehead. Who would enter into such a fraught transaction? Not only are the goods sitting out in the hot sun and open air, with customers flowing by and milling about, but you have to hurry this fragile and volatile package home as soon as you get your hot little hands on it. Jars of peanut butter pose no such problems.

I remember riding my bicycle through an open air market in Trapani one gloomy Saturday morning. Two stands in particular caught my attention. One was in fact just the bed of an Ape that held the usual assortment of marine victims. Next to them was a young man screaming at the top of his voice, strenuously urging potential customers to hurry up and buy the fish because there was no time to wait. Everyone knew the situation was dire: fisherman, shoppers, even the fish themselves, because they appeared to still be very much alive, flopping about frantically in their new atmospheric habitat. The other, instead, was a cheesemonger. Laid out on the table before him were various offerings in their familiar geometries: the plump flattened cylinder, the sharp little wedge. He stood, placidly, waiting for people to filter his way. They knew what he had. If they wanted it, they would come. More to the point, if they did not want it, he could just wrap up each inert form in its respective cloth and load it back on to his truck to try again another day. Not only was time not an issue; it was in fact on his side. Cheese only gets better with age, even over months; fish becomes poisonous within days, even hours.

And it does not end there. The fact that the lamb was frolicking about in a grassy field, if it was so lucky, before being led to slaughter is bad enough — the juxtaposition from happy prancing to being laid out cold and skinless on a table is wrenching. But consider the fish. These poor little creatures were looming about in the deep green depths before being hauled with force to the surface and then dumped onto the deck of a boat before being put on ice in the hold, only later to be laid out for sale in the gleaming sunlight. I think this is what their anxious faces tell us. It is this radical shift in registers that is marked by their open mouths and bulging eyes. Nothing about the scales, the fins, the gills recommends their final dry air arrangement.

And it is not that the restaurants where you pick your own living fish out of a tank are any better. While I admit that seeing a live fish, even in a tank, is less disturbing than seeing a dead one in a stand, nothing about the rest of the process is reassuring. One, how do you choose, even if you are a happy pescatarian? How do you assess eatability, deliciousness, with the fish in its present swimming state? And then, secondly, once you do make this selection, a word that has troubling mid 20th century overtones, how do you adjust your comportment accordingly? “Yup, it’s you buddy, you are the one I have picked.” It seems like a particularly perverse version of the Dating Game.

So I have decided to avoid the entire marine biome all together. Apparently traditional Sardinians are the same — the sea was not their thing. No, it is the rolling and craggy hills of the interior that suit them. Look at a traditional Sardinian menu; it is not big on seafood. You might find it strange that islanders are so averse to the sea but it is really not all that unusual. The ocean is a strange environment for human beings, one to be engaged with caution if at all. Let the fish and other creatures have it; they are better built for it.

No matter how much nutritionists recommend eating fish for its especially nutritious qualities, it remains for the most part unpopular, and I think there is some wisdom in this popular unpopularity. It is too hard to cook and even eat with all of those little bones that are just waiting to send you to the emergency room. We are not built for it, with our big fingers and square teeth. Let the cats deal with them. Chickpeas, beans, shafts of wheat — that’s our game, that’s what we are good at, so let’s stay there, in the earthy fields, standing on our own two feet on terraferma, and not rocking about on silly boats, that no matter how much you muck about on them, ever feel like home.