Gucci Power: The Omnipresence of an Italian Brand

One of the world's most elite fashion brands has been increasingly embraced by billions thanks to music, language, and counterfeit products. 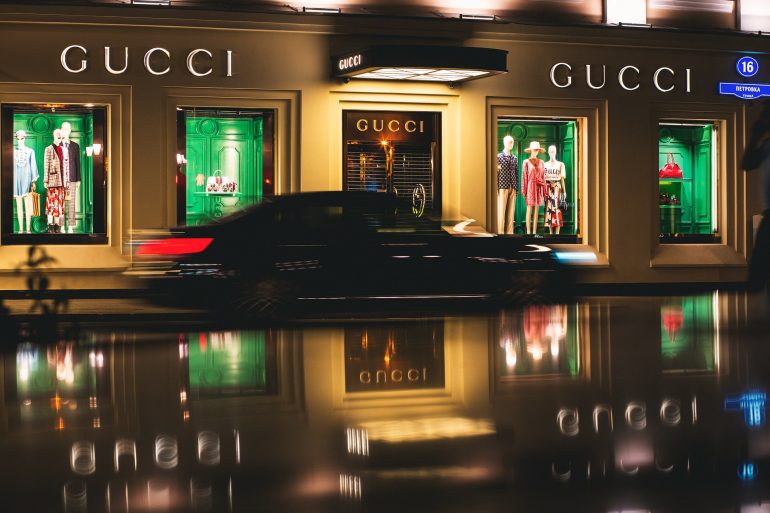 In the Italian fashion world there is no shortage of powerhouse couture. Brands like Versace, Dolce & Gabbana, Prada, Valentino, Fendi, and Armani jostle for market share in the luxury arena. But the label with the most reach and impact by far is century-old, Florence-based Gucci.  The rags to riches tale of Guccio Gucci, and how his vision for fashion developed after working at the Savoy Hotel during the early 1900s, has been told many times, so we will spare the reader yet another iteration. But the evolution of Gucci from high-end bags and shoes for the elite to pop culture ubiquity is a more recent development that is worth delving into. While the wealthy will always look to Italy for their latest statement piece, Gucci has in many ways transcended cultural boundaries, becoming a universal totem through music, language, and the wide availability of counterfeit products.

Each year, Forbes Magazine releases “The World’s Most Valuable Brands” list, ranking the most sought after and prestigious companies on their revenues and earnings. Between 2019 and 2020, the value of Gucci grew by 22% to an estimated $22.6 billion. It leapt from 44th place to 31st place, outpacing Chanel, Hermès, and Cartier. The only other fashion house to outrank Gucci was Louis Vuitton in 9th place, with a staggering $47.2 billion brand value. This list is worth mentioning because Gucci is the only Italian brand that appears in the rankings, and thus should be considered among the primary ambassadors for Made in Italy around the globe. If you ask one person from Bangkok and another from Lagos to pronounce the name Gucci, they may very well butcher it, but they will undoubtedly recognize the interlocking Gs and the green-red-green pattern.

Gucci did not reach this point of instant recognition overnight. The first Gucci store in the United States opened in 1953, but for several decades the brand remained far removed from the experience of the vast majority of American consumers. It was really with the rise of hip-hop music that set Gucci on a new and unexpected path to the pocketbooks of the masses. Dapper Dan, a black fashion designer from Harlem, realized that his clientele wanted bold Gucci, Fendi, and Versace logos splashed on tracksuits, bucket hats, and other staples of urban streetwear. While until this point Gucci products had been relatively understated, the braggadocio attitude of New York’s drug and music notables needed a bolder outlet. The moment that truly established Dapper Dan on the national hip-hop fashion scene is when he styled Eric B. & Rakim on the cover of their 1987 album Paid in Full. Dan customized track jackets that featured large interlocking Gs in the center with the Gucci GG Canvas pattern on the collar and shoulders. Dapper Dan’s ‘logo-mania’ caught on quickly, and artists like LL Cool J, Mary J. Blige, and Salt-N-Pepa made the look all the rage into the 1990s. This fashion legacy has been carried on as ensuing generations of music artists like Kanye West, Cardi B, and Miley Cyrus have worn and promoted the label.

Gucci has since entered American slang usage in several ways. The name itself has become a term that means ‘fancy’ and ‘fashionable’ but also ‘great’ and ‘excellent’. American millennials may respond to a question about their wellbeing by saying “It’s gucci,” or describe an exciting party as being “So gucci.” Much of this linguistic transformation can be attributed to the brand being associated with wealth and success, as well as its pervasive use by modern rappers. In the 2017 song Gucci Gang, for example, rapper Lil Pump drones the word Gucci 53 times in two minutes. Other tracks are not quite as repetitive, but Future did an excellent job of advertising Gucci’s $400 luxury slides in 2015’s Thought It Was a Drought, and Migos made sure to emphasize that their belts, jackets, shirts, and jeans were all double Gs on I’m Gucci. Music like this is being listened to by adults, but also widely by any child with access to YouTube or music streaming, meaning that an entire new generation of consumers is being primed to covet Gucci. The brand can do all the advertising it wants in Esquire, GQ, and Vogue, and throw the most lavish runway events, but viral songs will always prove to be invaluable marketing coups.

A last area where the power of Gucci can be seen is among counterfeit and knockoff products. According to a 2021 study by UK-based price comparison firm Money, “Gucci is the most-frequently featured brand when it comes to counterfeit goods on TikTok.” The short-video app is now used by more than 1 billion people worldwide, so the fact that Gucci is at the top of the list is significant. One might assume that any pirated goods would be damaging to the bottom line of a brand, but there is another angle to the story. The widespread presence of fake Gucci scarves, bags, belts, and shirts is a result of the brand being so well-known. On the e-commerce website Etsy, for example, there is an entire category labeled ‘Fake Gucci’. There are more than 1,200 products under this category, ranging from a T-shirt with the Gucci pattern that reads ‘Gnocchi’, to tiny Gucci sneakers made for Japanese Obitsu dolls. Gucci is aware of these knockoffs and copies, yet has made no sustained effort to have them removed from circulation. The company has even produced a line of products called Fake/Not, which feature the words ‘FAKE’ and ‘NOT’ stamped on opposite sides of the bag or shoe. Gucci calls the selection “a playful commentary on the idea of imitation,” so it seems that they can approach the problem of counterfeits with relative nonchalance.

One hundred years after it was founded as a boutique leather goods store on Via della Vigna Nuova, Gucci appears to be stronger than ever. As it continues to enter new markets in the Middle East and Asia, there should be steady growth for decades to come. Gucci is an established brand, yet it is not afraid of innovation and moving with popular culture to expand its clientele. Whether it is The North Face, K-Pop stars, or Peanuts, Gucci has understood the power of limited collaborations to draw in younger consumers.

We remind our readers that on November 24, Ridley Scott’s House of Gucci will be released in US theaters. While it tells a more sinister tale of the events surrounding Maurizio Gucci’s tumultuous marriage and eventual assassination, any publicity is good publicity for Gucci.