From Milan to Glasgow: Youth At COP26 Stopping The Blah Blah Blah

We look back at Milan's Pre-COP26, where global youth had a unique opportunity to make their voices heard. 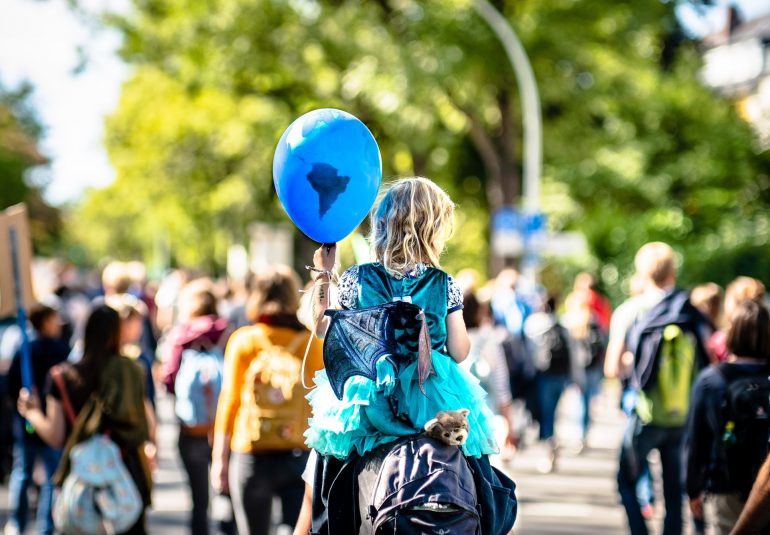 A girl protesting for climate in Bonn, Germany. Photo: Mika Baumeister on Unsplash.

This article is written in collaboration with Davide Colombini for Rethinking Climate’s column, Sustainable Italy. Rethinking Climate is a youth-led international cooperation nonprofit whose mission is to understand how best we can communicate, and therefore comprehend, the climate crisis and sustainability in its variety of topics. What is it about the way we are communicating climate issues that makes it so difficult to implement the solutions available?

One month before each Conference of the Parties to the United Nations Framework Convention on Climate Change (COP), a preparatory meeting called Pre-COP takes place. The function is to bring together ministers to discuss policy issues and key negotiating topics in the run-up to COP, the conference on climate change that is taking place in Glasgow from October 31 to November 12, 2021.

At the end of the first week at the COP26, the last two days were dedicated to youth. Activist Greta Thunberg was received by many young people who traveled to Glasgow to protest and support her in making sure leaders at the conference are concretely taking interest in saving the planet — without any “blah blah blah.” Her appearance came in spite of the fact that Thunberg has commented that the COP26 is simply a “PR event.”

This year’s preparatory meeting — the Pre-COP26 — took place at the Milan Congress Centre (MiCO) from September 30 to October 2. It was attended by nearly 50 countries, with representatives of the Secretary of the UNFCCC (United Nations Framework Convention on Climate Change), the chairs of the Subsidiary Bodies of the Convention, and a number of civil society stakeholders who play a key role in the transition towards sustainable development.

In fact, this meeting was the last chance for ministers to formally shape the various negotiations that would be the key points of the Glasgow meeting. The summits were already due to meet last year, but COP26 was postponed due to COVID-19 until this year.

After this year’s Pre-COP, the signatories of The Paris Agreement — signed at the influential COP21 Paris climate conference in 2015 — have recently presented their headline decarbonization commitments, called the NDCs. As the UNFCC explains:

The Decarbonization Project was reaffirmed during the days in Milan. It should be remembered that the G7 countries and Brazil have committed to eliminating greenhouse gas emissions by 2050, while China has committed to eliminating them by 2060. It was emphasized again during the Pre-COP that it is important to pay attention to countries like China, which are among the largest emitters.

The President-designate of COP26, British minister Alok Sharma, reconfirmed the G7’s goal of no longer funding power plants using this type of resource. It is also important not to forget that there are different goals to be achieved.

Italian Minister for Ecological Transition, Roberto Cingolani, reiterated the need to keep global warming within 1.5 degrees C, not 2, and that there will be no more investment in fossil fuels — as Italy, too, tries to abandon gas and invest in renewable energies.

Yet, following the publication of the IPCC (Intergovernmental Panel on Climate Change) report, it emerged that under current conditions the temperature will rise by about 3 degrees over the course of the century. This is a far cry from the 1.5 degree target, as John Kerry also pointed out during his speech. The importance of increasing NDCs, moving ahead with the Paris Agreement rule book, and securing climate funds for developing countries was also mentioned.

A unique Pre-COP, a young Pre-COP

This year’s Pre-COP was unique as, for the first time, a group of young people was invited to attend the meeting for a campaign called Youth4Climate: Driving Ambition. Between September 28 and 30, they accompanied the governments with a series of proposals, which saw the participation of over 400 young people between 15 and 29 years old from 186 countries. The objective was to discuss the main aspects of the climate crisis with experts in the field and to draw a charter containing the main points for the 2030 mission to achieve ecological transition and, of course, include younger people in the decision-making process to combat climate change, as they would be the generation that would see most of the changes. The charter was presented at Pre-COP26.

In regard to young leaders, activist Greta Thunberg stands out with her “blah, blah, blah” speech, where she recalled the inertia she has long denounced. She is not wrong if we take into account that the effort to keep the temperature of global warming within 1.5° C takes place through non-binding emission reduction plans among member countries.

A significant intervention regarding the disparities between countries caused by climate change was given by Vanessa Nakate, a young Ugandan activist. She referred to the situation in Africa that, despite being the continent with the lowest emissions, is suffering the effects of climate change most drastically and quickly. She also addressed the big financiers of the transition. A lot of money is needed, but these cannot just be loans. Rather, outright grants are vital to support all countries.

What to expect at COP26

Commission Vice-President Frans Timmermans has said that one of the duties of COP26 is to convince as many countries as possible to follow the same principle: that “climate change poses the greatest threat to humanity and we, therefore, need to change radically and quickly.”

In a sense, nations at COP26 have done just that. Statements have been made to reduce methane, for example — a plan set personally by the United State’s Environmental Agency. Meanwhile, there are plans to provide more funding for “green” projects, to reduce emissions through renewable energy, and to commit to stopping deforestation. At the very least, if we think positively, we should consider that 70% of the world’s economies now have climate neutrality targets. This was at 30% until only a few years ago.

With the youth at both Pre-COP26 and COP playing an important role, we are now looking forward to COP26’s conclusion, which has the opportunity for each country to demonstrate its commitment to delivering concrete results. Ultimately, our waiting time to protect the planet has now passed. Now it’s time to act.