Why Does Alitalia Live On In Its Doppelganger ITA?

Nostalgia for Alitalia might not be the only reason why shades of the airline live on in Italy's new national carrier ITA Airways. 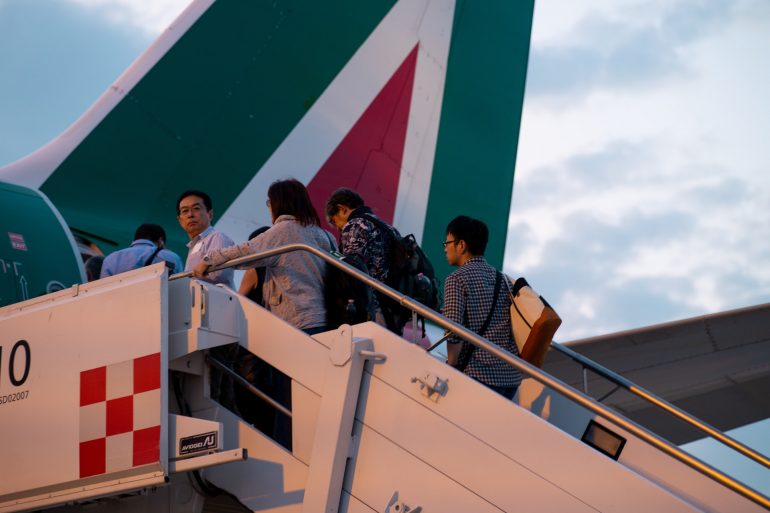 An Alitalia flight from Rome. Photo: Marcel Pirnay on Unsplash.

The introduction of new national carrier ITA Airways shows how Italian nostalgia for Alitalia ran so deep that Italy can’t stop itself from having another shot at financing a new national air carrier — one that is already mired in controversy — despite the fact Alitalia was beset with economic woes and was largely out of touch with today’s changed times and customer trends.

As the decade long life support machine for troubled Alitalia flatlined on October 15, the noise of indignant protesters refused to die down. Just last week ex-Alitalia stewardesses made the news around the world by stripping down to their underwear in the center of Rome in a choreographed, almost nostalgic performance that highlighted their disappointment at the closure of the now defunct airline. The protest was in peaceful solidarity at their former colleagues who, they say, have been forced to accept less than favorable contracts with ITA, the Alitalia doppelganger that is, for the time being, one 100% state owned by the Italian Ministry of the Economy and Finance.

National pride is a powerful force

In an era where low cost, no-frills airlines have gained over 50% of market share at Italian airports, it was perhaps surprising that, after twenty years, we had to witness what a painful process the demise of a national carrier can be. The nostalgic story of Alitalia that spanned 74 years is a metaphor for how painful change can be for Italy and Italians, and more specifically, how the consequences of a globalized economy can touch the nerves of national pride and sense of identity. National pride is a powerful force and for decades following the end of the second world war, Alitalia united Italians in a way that only Italy’s nation’s football team still do today.

Thoughts of Air France taking over horrified Italians in the past

The national colors, stylish interiors and elegant flight staff uniforms designed by Armani and Balestra among others, and the fact that even the Pope flew Alitalia guaranteed that the romantic story behind the national flight carrier, was a vision that seared deep into Italian hearts, so much so that in 2008 I remember that there was uproar when Air France-KLM made a bid to take over the ailing Alitalia. People were shocked and reacted in heated disbelief in coffee bars all over Italy that the Italian government would even consider selling out to the French. Cultural rivalries between the two countries traditionally run deep especially when it comes to food, wine and vehicles. For many at that time it would have been akin to a treasonable act if the French had taken over their national symbol of the skies.

Later desperation to save the brand overrode even national sentiments

But in a period when Alitalia was making huge losses, Air France wasn’t the only airline to put offers on the table and what followed was a thirteen-year battle to prop up the sick man of the skies; a highly controversial and arguably futile exercise that showed contempt for EU anti competition laws in an attempt to save jobs and keep the bloated icon alive. So, the Air France-KLM deal collapsed but they did later buy a 25% stake in 2009. Needless to say, none of Alitalia’s deals with foreign airlines were ultimately enough to save them from collapse. Easyjet, Ryanair, Lufthansa, China Eastern airlines and even Ferrovie dello Stato Italiano all made a pitch for shares in Alitalia in recent years with each one removing their interest during the pandemic that led to the Italian government taking full control in 2020.

Opinions about Alitalia in recent years were mixed

Alitalia found out the hard way that you can’t live off romantic dreams and patriotism alone and the pandemic marked the final nail in the coffin for the historical brand. Alitalia’s economic woes were not only financial though, as a lack of trust in the company over the past 25 had taken hold and affected the quality of the service too with many feeling that the shareholders should accept the inevitable and wind business down. Stories of irritated business travelers missing important business appointments due to regular Alitalia strike action and cancellations led to people being wary of making bookings. Another frequent traveler I spoke to also didn’t have much nice to say about the carrier. It was the only airline she has flown with that lost her luggage. She told me that on that flight, 20 years ago, staff were brusque and appeared to inflame tensions when an argument with a passenger broke out rather than minimize them. In her mind it became synonymous with inefficiency and poor customer service.

The introduction of a new national carrier is not without criticism

Old habits die hard though, and it seems as if Italy just can’t shake its desire to have a national carrier despite fundamental shifts in customer trends and a world today with very different priorities compared to Alitalia’s heyday. So, ITA was born but rather predictably it has already divided opinion over dismay at the employment conditions they have offered their new employees, 70% of whom came from Alitalia, to controversy over the paint used on the fuselage of their 52 strong fleet. The metallic blue is a clear nod to Italy’s national football team and perhaps bright enough to distract some of the doubters from the red, green and white livery that was so emotionally emblematic of Alitalia. Critics of the metallic blue, however, point out that the weight of the paint itself will lead to a higher fuel consumption; a black mark against it for climate change activists and those concerned about their carbon footprint and in stark contrast to ITA’s boast that they will use sustainable aviation fuels to reduce carbon emissions by 55% before 2030.

Can ITA step up to the plate?

Alfredo Altavilla, the Executive Chairman of ITA, optimistically emphasizes that the company has to keep up with the times — but how easy that will be when national carriers around the world are struggling is open to question. Leasing planes and flying to fewer destinations is one strategy, but this too remains controversial not least because low-cost airline Ryanair is said to be already poised to take a big share in Italy airports. ITA, it is said, can only hope for 17% share at the most. Despite this, ITA might yet make it to nimble low-cost status and is currently already in talks with Delta airlines to cut a deal. However, many still believe that Alitalia simply got disbanded in favor of ITA to keep the romance of having a state carrier alive.

Is it really necessary for Italy to have a national airline?

Many believe that in a globalized economy there is no marketplace for national airlines anymore. Higher fuel prices and carbon emissions taxes beg the questions as to whether there is value in a national carrier other than whimsical national patriotism and pride. National carriers quickly become bloated and inefficient and lack innovation. Is this to be ITA’s fate? Others, however, see having a national carrier as important from a marketing perspective since the airline industry has implications for other industries such as tourism, which accounted for 7% of GDP in Italy in 2020. The problem is younger people are not so loyal to national brands in contrast to their parents. Despite this, young people on the islands of Sardinia and Sicily may feel more strongly about keeping hold of a national carrier that traditionally guarantees routes and prices in a way that private companies cannot afford to do; and ironically ITA seems reluctant to do in its current streamlined capacity. The islanders are increasingly concerned that air traffic will continue to keep coming to the islands. People need to travel for work, to study, and for personal reasons. If they can’t do so this, some fear it will lead to irreparable social and cultural damage to residents. For the time being low-cost Spanish carrier Volotea is guaranteeing a service between Sardinia for the next seven months but there is not telling what will happen after that.

Can ITA pull it off and silence its critics?

It is too early to say if ITA can seemingly pull off the impossible and silence the doubters and critics who believe that national carriers should be consigned to the past. Alitalia was a powerful icon that united Italians under their flag in the skies and it does indeed live on subliminally in ITA. The new carrier though has to compete with the likes of Ryanair and other low cost airlines, plus the fallout from the pandemic where airlines are struggling around the globe to adapt to a slimmed down industry. ITA has got big plans to keep up with the times as the once right-hand man to FCA’s late Sergio Marchionne, ITA Executive Chairman Altavilla, says. If Fiat’s successful metamorphosis into FCA is anything to go by, then the Italian government and Alfredo Altavilla may just have got their timing right. It remains to be seen if Italians — and especially Italy’s island populations — will agree.