I was definitely no longer in Sweden, at least while I was in this restaurant. 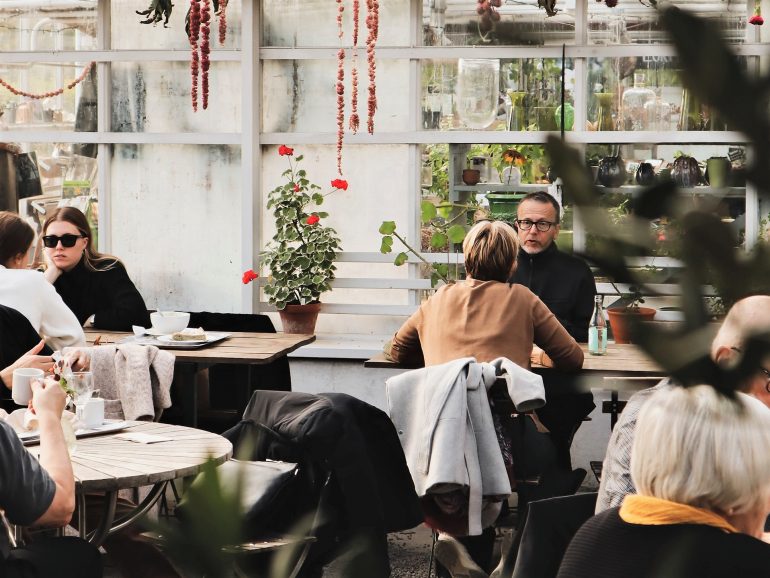 A restaurant in Stockholm, Sweden. Photo: Taisiia Shestopal on Unsplash.

I was definitely non longer in Sweden, at least while I was in this restaurant.

Another memory from my travels over the past few years that sticks in my mind and comes fluttering back from time to time, with great warmth and nostalgia, goes as follows.

I had spent a year or so working on a house that I own, turning what was essentially a detached garage into a small cottage, living in it at the same time that I was working on it. I did everything except for pouring the new concrete floor and patio, which was far beyond my ability; that task was trusted to a Mexican-American man, whom I flagged down as he was repaving my street, to organize a cheeky side job, as they might say in England. Never underestimate the beauty and utility of serendipity. Nevertheless, I did everything else from the studs out — electrical, plumbing, tiling, siding, painting, door installation, fixture installation, appliance installation — and I was exhausted.

It so happened that the family to whom I had rented the front house had a friend who was looking for a place, so I struck a quick deal, bought an airline ticket (prices were absurdly low in those days, less than $300 from San Francisco to Copenhagen), and off I went.

I was sick of my four walls and wanted to do nothing but camp out in the open, something that was possible, I discovered through assiduous online research, virtually anywhere in Sweden, under the tradition if not policy called Allemansrätten, or Everyman’s Right — please feel free to translate this as Every Person’s Right if the standard translation bothers you. I would just have to make sure that I was far enough away from private property, especially residences, and that if I set up on a farmer’s plot that I got permission first et cetera. It is a practice that relies upon a measure of Nordic mutuality, equanimity and reserve.

And so I did that, wandering through the rather bleak landscapes of southern Sweden like a 70s hippy, namely Richard Harris in Man in the Wilderness, except with fewer American Indians and considerably more cinnamon buns. Sleeping and eating was all done outside as I wandered from one town to the other, finding refuge on a quiet beach, around a harbor, waiting for cafes to open, falling on my knees in gratitude for the public libraries, which were always expertly run by nurturing middle aged women who had the strength of a liberal, generous and well organized state behind them.

Still, I have to say, that after a couple of weeks, something was missing from my admittedly meager existence. The coffee shops that ranged from homey to elegant, the abundant and immaculate public restrooms, the top hatted cheese seller in his gleaming stainless steel van, the helpful and competent albeit rather epicene supermarket stock boys and/or girls (I really could not tell), made my life possible and comfortable, but my days seemed hollow. Maybe it was jet lag, but even the commercial exchanges I made lacked the fortifying zing that retail therapy conferred to me in the United States. The ‘comity of commerce’ that I wrote about in a previous piece seemed to be missing, or I was missing it, not cued into the essential cultural matrix upon which such rich cultural interchanges depend.

All of that changed one day. During one of my library sessions, I happened to see a listing online for a local eatery whose reviews were quite strong. I noticed that they were open for lunch, so I made it my project for the day to make my way to where they were and check them out. As was often the case, I was the only customer outside waiting for them to open, and how nice it was to see the smiling young woman enact that classic combination of flipping the hanging door sign from CLOSED to OPEN — I think they were in English — while simultaneously turning the key to unlock the door. I smiled, said hello, and struggled in through the door, swinging my pack off of my shoulders and giving a shake of my head as a way to both indicate my bewildered state and ask where I should sit. The woman graciously showed me to a table (saving me the effort of selecting one) and told me that she would be right back with a menu. She returned within a matter of seconds and told me she would be back to take my order, asking me if she could get me started with a drink. Beer was the order of the day and, even after hundreds or thousands of restaurant meals, I was surprised when a different young woman came out with an open bottle and a glass, apologizing for the fact that it was only 5%. “Was that okay?,” she asked with a tilt of her head. I was both puzzled and charmed by her rubric of beer evaluation that indexed alcohol content only. “Yes,” I said, “that’s fine.” I was definitely no longer in Sweden, at least while I was in this restaurant.

While I sipped my beer and waited for my meal to come out — I can’t remember if I placed the order with the woman who brought my beer of with the one who opened the door — I saw an electrical outlet in the wall under the table right by my feet. I could not believe my luck, so I rooted through my pack, fished out my charger, and plugged in my iPad. The day was looking better already.

So my dish came, which was fine. I finished it and my beer, probably ordered a coffee and a piece of baklava, then paid my bill with a big American tip, and left, working my way out the door with my pack and bidding farewell to my saviors of the day.

Sometime after that, hours after I had left the restaurant, I realized that I no longer had my charger. I realized that I must have had left it in the outlet under my table. So I walked back to the place — a great thing about this kind of life is that you have plenty of time to correct your errors — opened the door, and stood there waiting in the empty dining room. Before long an older man came out and raised his eyebrows in greeting. “Did you . . . ,” I began. He cut me off. He then walked to the refrigerator from where the younger woman had gotten my beer earlier, took a small box down from the top of it, pulled out my charger and dangled it in front of my eyes.

My relief was obvious and he noticed this immediately. He handed me my charger and — and this came as a surprise — gave me a big open handed slap on the back and then strongly shook my hand, a pairing of gestures that I still spend time trying to parse accurately, never with much satisfaction.

What does any of this have to do with Italy? It was a pizza place, but not one run by Italians. And therein lies another discussion, for another time.