Can Belluno Lead The Fight Against Climate Change?

Three years after the devastation of Storm Vaia, the city of Belluno in the Dolomites unveils a new policy plan against climate risks. 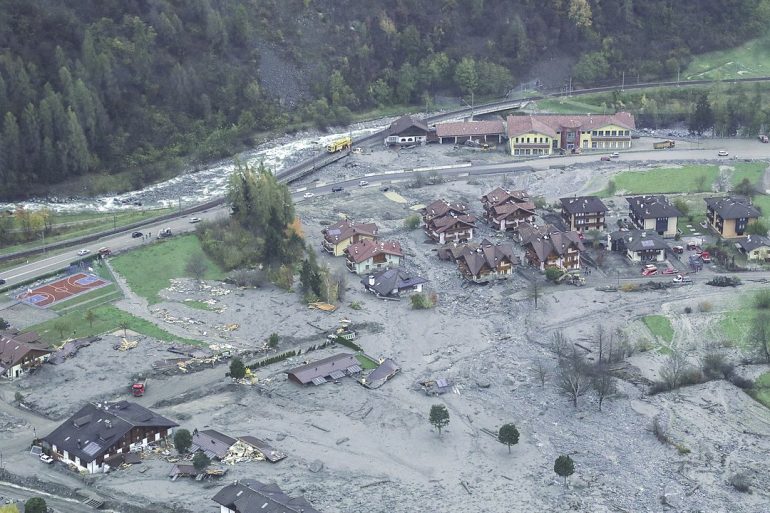 It was October 26, 2018. In the weather stations that were monitoring climate conditions for the north-east of Italy, faces were tense with concern. Italy’s eastern Alps are renowned for their dolomitic panoramas—some of the most breathtaking scenery in the Alps—but in those days something else was gaining attention. That morning, in the buildings of the provincial and regional governments, politicians were being warned of the climate disaster that was about to unfold. The resilience that marked those landscapes was breaking down, giving way to astonishment and apprehension. Something was changing. Nature was in revolt.

Storm Vaia—the exceptional storm that hit the regions of Veneto, Trentino Alto-Adige, Lombardy, and Friuli-Venezia Giulia—unleashed its force of winds and water over four incessant days, causing the loss of 8 million cubic meters of forest, eight deaths, and nearly three billion euros of damage. In Belluno, one of the areas that was most damaged by the storm, meteorologists registered 30-50mm of rainfall per hour, and winds reached unprecedented speeds, with peaks of over 192 kilometers per hour. Landslides and floods smashed the land, while the strong gusts of wind ripped apart houses and took down thousands of trees.

To this day, Vaia is the most severe climate event that has ever occurred in the province and Italy. But perhaps what’s most important is that Vaia marked a temporal watershed. After that, the region now sees climate change as a concrete reality.

Now that almost three years have passed since the storm, climate change has is changing the policy agenda in Belluno. Inhabitants and policymakers have realized the urgency of addressing climate change, especially in an area like that of Belluno, where severe climate events can be exacerbated by geographical conditions.

Thus, on a sunny day of October 2021, 14 days before the anniversary of Vaia and four days after the remembrance of Vajont, a momentous meeting took place. In a room on the second floor of a historic building in Belluno’s city center, a fresh methodology to assess and manage territorial climate change was discussed among academics, politicians, and industrialists.

On the agenda was the presentation of the project “Climate Proofing in Investment and Spatial Planning.” The medieval frescoes on the walls accompanied the participants’ interventions and recalled times when humans were still unable to act as a planetary-scale geological force. After the ritual introductions, the uniqueness of the initiative emerged. The investigation by the Enel Foundation, together with the Venice International University (VIU), the Euro-Mediterranean Center on Climate Change (CMCC), and Confindustria Belluno Dolomiti, aims at identifying and evaluating the climate hazards threatening the Belluno province. Yet, echoing the words of Carlo Papa, managing director of the Enel Foundation, very few studies have developed such a harmonic and methodical approach to the effects of climate change on the territories.

During the meeting, Carlo Giupponi, Dean of the Venice International University, shared explanatory slides of the project, including the mathematical function that links risks with hazards, exposure, and vulnerability. At present, the model has been used to identify possible implications for specific industrial and economic activities, such as the eyewear sector, the energy infrastructure, winter and summer tourism, and major winter events.

Although only partial, the results and the maps presented clearly highlight the need for politicians and planners to consider the scientific approach to climate change. What emerges, in fact, is that in only few years’ time, floods and storms are likely to be increased, with specific territorial concentrations and possible effects on the economic and social activity of the province. Smaller snowfalls are expected as well—something that will require targeted and careful planning to cushion the effects on tourism and, perhaps, to create new development opportunities.

If the findings of the paper prove to be a decisive predictor of climate change in the Belluno area, the hope is that this project could open the door to a new form of political moderation—one which would more readily embrace climate science as a guiding principle for decision-making. Belluno can become a province in the vanguard, not only in eyewear and tourism—two industries for which it is known—but also, above all, for its fight against climate change.

This tiny pearl in the Dolomites has the opportunity to be an example of planning and strategic sustainable development—for Italy, and for all those communities that aim to accompany their citizens towards a safer and more sustainable future.