The Italian version of the Grand Budapest Hotel was a luxurious hideaway, but its infrastructure is the only image it has preserved. 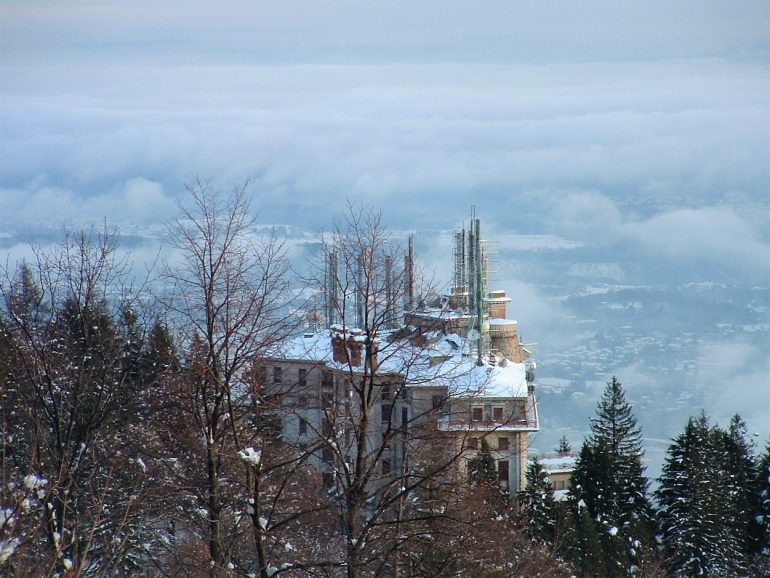 Chancing upon its old images that resemble postcards, it is easy to see how the Grand Hotel Campo dei Fiori was a luxurious hideaway: built on a mountainside, secluded in the stillness of the woods, a paradise at a sierra that welcomed guests who wished to purify the stress, filth, and grime that the city had instilled in them. The postcards, on the other hand, will stay relics of the past. Today, the hotel, which would have been a synonym for the Grand Budapest Hotel if it had existed, has endured a thousand kinds of weather until its infrastructure is the only image it has preserved.

The Grand Hotel Campo dei Fiori, perched atop Mount Tre Croci in Varese’s northern outskirts, is a monument to the glory of bygone eras, harkening back not only to its interior and furnishings, but also to a masterpiece designed by Giuseppe Sommaruga, an Italian architect of the Liberty style. Sommaruga was a student of Camillo Boito, an Italian architect and a founding figure of modern Italian conservation, prior to the establishment of the hotel, but the student quickly rebelled against his master’s historicist approach, arguing that architecture should found its own reasons for its vigorous style.

Sommaruga was a proponent of the Liberty style in architecture during his time, and he defined the characteristics of the Italian Liberty, or floreale. Despite his innovative reinvention of the architectural technique, Sommaruga’s name only appears in a few journals of literature about his works, and one of them is the Grand Hotel Campo dei Fiori, which he designed in 1908. Since its demise, the hotel has been preserved as a monumental structure, serving as a perfect example of Italian liberty.

Varese rose to the top of the list of must-see destinations in the first decade of the 20th century, attracting an influx of investors, business executives, and visitors. Mount Campo dei Fiori, whose wilds and sprawling green trees married the state of serenity its nature radiated, was a go-to site to dawdle in the neighborhood until the Grand Hotel Campo dei Fiori. Wealthy individuals built villas on the southern slope of the mountain to ensure that they would remain near to the wildness, boosting the municipality’s economic growth.

In 1907, entrepreneurs who saw Varese’s ability to preserve its tourist-infested realm created Società Anonima dei Grandi Alberghi Varesini, which invested in the municipality and Mount Campo dei Fiori. The business then commissioned Sommaruga to create hospitality buildings in the surrounding neighborhood, resulting in the 200-room Grand Hotel Campo dei Fiori. Looking at it today, an uphill route leads to the hotel’s entrance. The elevation by the entrance was lowered one level to give an uneven but inviting appearance from the outside. On the first level, the exterior’s yellow paint is interrupted by a single horizontal palette of terracotta red.

Given that it is burrowed into a high land, the Grand Hotel Campo dei Fiori is coddled by the mountain vistas and the embrance of the tall green trees outside. The gentle breeze refreshes the lungs and cools the skin, an act of acceptance of nature in its purest form. Wrought iron gargoyles, perplexed red bricks, marble pillars, and carved flora and fauna-inspired motifs slither through the construction, a few treasures of the iron craftsman Alessandro Mazzucotelli adorning the grandeur of the place. These arrangements are still around today, despite some fading, tearing, and peeling.

Returning to the hotel’s beginnings, the early decades of its operation saw an influx of elite visitors hunkering down in hotel rooms, dancing to or enjoying the music that floated across the dining area, and conversing on the balcony that overlooked Varese below their feet. Moving past the attention it received, the hotel was doomed to meet its closure as a result of the wars that ravaged Italy.

The First and Second World Wars rattled the hotel’s status as a must-visit destination and waded into its decline. Tourists, elites, and investors had flocked from the lush stays in the mountains to the lapping waves of the seas since the economy boomed in the 1950s. It marked a decrease in the number of people entering the hotel, slowing down the glory days it had enjoyed. Visitors must board a funicular at the foot of Campo dei Fiori to be whisked up to the peak, but this mode of transportation ceased service in 1958 due to a lack of passengers. The hotel existed for another decade, but the last guest checked out in 1968.

Despite numerous attempts to bring the hotel back to life, it has been closed and abandoned for decades. Radio antennae were added in the 1980s, and connecting metal rods were used to anchor the plate-shaped antennas, which are now clustered at the center of the hotel’s terrace top to receive signals. The rooftop was leased out in order for the new owners to be able to afford the upkeep payments. Initially, the Castiglioni family owned the hotel and hired caretakers to keep it in good condition, for a period even residing inside with their families and living alone in the 200 rooms.

Later, in 2016, the Grand Hotel Campo dei Fiori was sold to a private company led by a former politician who stated that the hotel needed to be remodeled in practically every aspect. The organization also said it has no intentions to reconstruct or reopen the hotel. On the other hand, group visits are available for individuals who want to see and experience the vault of the past. If visitors are looking for an offbeat mountain trip, this guided tour to the Grand Hotel Campo dei Fiori might be right up their alley. On this precious site of grandeur, recollections, and designs, they will soak in the narratives about the hotel, from being a remarkable staple of the Italian liberty to making a shot at restoring its splendid, sumptuous setting. Soon, they will realize that the Grand Hotel Campo dei Fiori has lived lives.