Many Sicilians are not fond of their island’s interior, but I am. 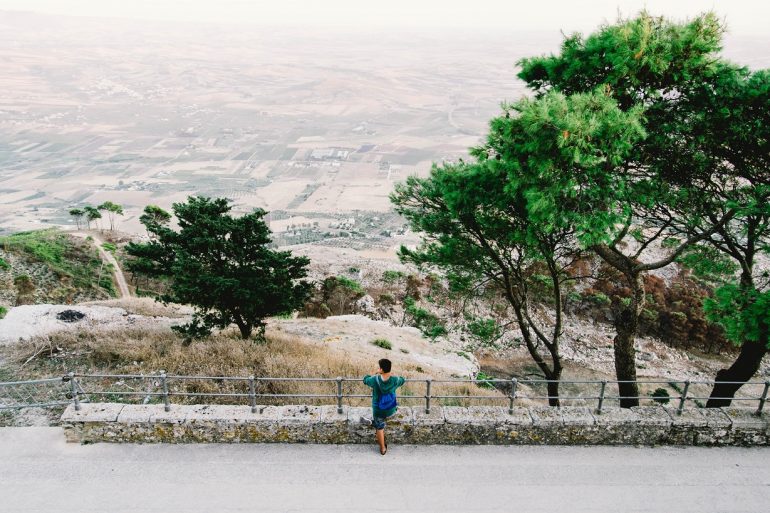 One memory that sticks in my mind more strongly than many others is of an impromptu stop that I made along the road when I came across a small caffè in the middle of nowhere, as one says — although it was in the middle of somewhere which was in the middle of Sicily, which is in the middle of the Mediterranean, so it was middle day all around. In fact, I have found that most Sicilians are not as enthralled by the center of their island, l’entroterra, far preferring the coastal towns and cities, dove c’è il mare. Not me, at least not in this case, not on this day.

I honestly cannot remember where it was anymore, although I think it must have been deep in the Val di Noto, but again as I said, far away from the coast, very much in the interior, all burnt and brown rolling hills because this was summertime. I was driving a red Fiat something or other, 500 or Punto, and I remember the sales pitch when I rented it in Catania, from a young woman who was not Italian but most likely from a nearby Slavic country or some other place on the Adriatic — or at least east of Sicily. In any case, I distinctly remember her telling me that, wouldn’t you know it, her brother-in-law was also an Aquarius, something that apparently occurred to her as she copied the necessary information from my drivers license. As I remember, the sale had already been made and we were now just writing up the contract, but no matter, a sales pitch is a sales pitch. It could be that she was merely making a deposit in the bank of good will, because what I discovered when I got into the car was that there was no radio. But at this point, what could I say, with the astrological connection I had with one of her relatives by marriage. So off I went.

The lack of a radio quickly ceased to be an issue as I made my way over the rolling hills, which were not only beautiful in their austerity but also a particular intellectual fascination of mine, their dry stone walls in particular. I was taking the twists and turns quite easily and quickly while also staying totally absorbed by the landscape. It was then that I came the closest I have ever come to a serious auto accident once I saw, after cresting one particularly steep hill, that I was somehow just a few meters away from the rear bumper of another car. I slammed on the brakes and felt, for the first time in my life, the peculiar sensation of antilock brakes, that controlled and indexed vibration, an oscillation that penetrated also the bones and muscles of my right leg and eventually my entire body. I was stupid and careless but I got lucky and avoided a collision.

I had been driving for a few hours and figured it was time to stop for lunch even though I was pretty sure it was only late morning. With arms still jittery from adrenaline, I turned onto a side road and found that the scene had suddenly become quite tranquil. Compared to the other road, the one that I was on now seemed greener and more enclosed, the hills more cuddling — coccolanti maybe in Italian — snuggly and protective. It was not long before I came across a little shack on the left, so I immediately pulled off and parked in the small patch of dirt that was adjacent to a partially enclosed space that contained a few sets of tables and chairs, including one or two with umbrellas.

I walked past them and into what seemed to be a small bar that also served food, just lots of little things under a glass case as well as one or two glass doored refrigerators holding bottled beverages. Tucked into the corner — the whole scene seemed pretty dark especially because I had just come in from the glaring sun outside — was a family composed of a woman in a very late stage of pregnancy, a man who could have been her husband or brother, and a younger woman, who slid behind the counter, ducking and gliding in the way that women who are natural flirts do, a way of acting that is part of their nature and which they execute seemingly without any particular strategy or intention, and which in any case lies entirely outside of the competencies of anyone without a female anatomy and, I would wager, female hormones.

I was caught by surprise by all of this and apparently stood there transfixed in the twilight without indicating what I wanted. Before long, the man got up from the table, where it seems they were about to start, and asked me if I wanted something to eat. I said yes, so he suggested that I take a seat outside and that he would be with me shortly.

So there I sat and it was not long before all kinds of things began to come out: little slices of frittata, cheese, olives, peppers, wine, and bread of course, along with other things that I have forgotten about, all of which I happily consumed at a perfect little table on a perfect little slab, overlooking a gorge that stretched out for kilometers beneath me. I think the place was called The Little Green something or other, only obviously in Italian.

I had taken in more than my fill but still had to have desert, which must have been some kind of tart or cake, followed by a coffee and some kind of liqueur the man offered as a kind of ammazza caffè. After all that, I had to sit and wait awhile for the effects of the drinks to wear off, especially the liqueur — an amaro — which always seem to hit me like a hammer.

There is a second part of this story, but I have used up my 1,000 words, so it will have to wait for a later piece.