The Amalfi Coast Is The Heart of Italian Ceramics

Handmade Italian ceramics have called the Amalfi Coast their beloved home for centuries, and it's easy to see why. 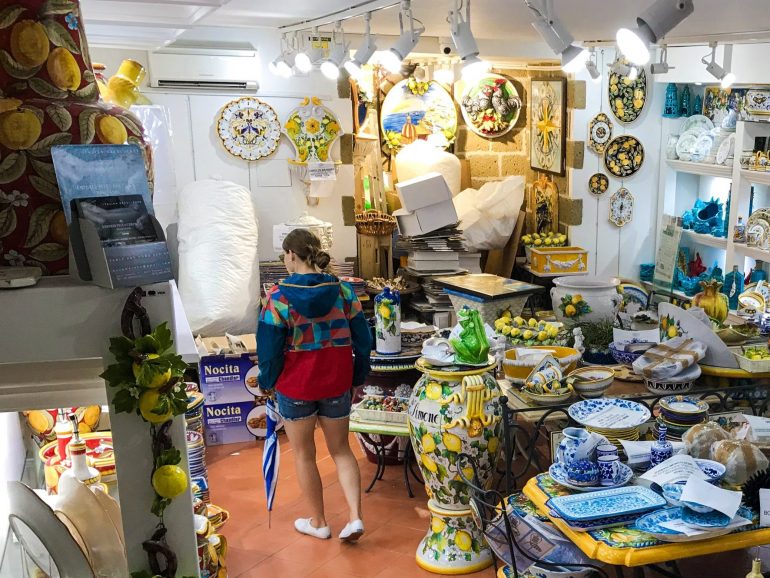 Italy’s Amalfi Coast is undoubtedly known for its dramatic seascapes, rich maritime history, and enormous lemons. As someone who has traveled in and around this region a handful of times, I often wonder how these centuries-old houses still cling to a cliff’s edge without plummeting into the Tyrrhenian Sea below.

Perched along the southwestern edge of Italy, the Amalfi Coast is made up of a handful of pristine and charmful towns including Positano, Amalfi, and Ravello. You’ll also find smaller, lesser-known villages sprinkled along the coastline that tastefully beg for your attention, too. Their striking vertical façades are an architectural wonder, and strict regulations have allowed for only one trafficked road — but you’d be bold to attempt to drive it. Otherwise, you can expect to get your daily step count in as the majority of these towns’ precipitous landscapes are only accessible by foot.

The town of Positano just exudes old-world charm, and many say it looks as it did 100 years ago. Amalfi stamped its place in history during the 11th century as a powerful maritime republic. It even produced Flavio Gioia, a 14th century naval captain, who is said to have supposedly invented the sailor’s magnetic compass. Neighboring Ravello boasts lush gardens and lemon groves that produce Italy’s finest limoncello, a lemon liquor this area is greatly known for.

It’s easy to see how the Amalfi Coast is one of the most idealized strips of coastline in the world, and a place so stunning that it was deemed a UNESCO World Heritage Site in 1997. Regardless of what town you choose to marvel at and explore, you’ll find a common trade they all share — the region’s dedicated craft of Italian ceramics.

The history around Italian ceramics and pottery seems to be a matter of opinion, but some experts say you can trace these origins back to the Etruscans. This ancient group of people occupied what is now southern-central Italy and pre-dated the Roman Empire from around the 7th to early 5th century BC. They were eventually overtaken by the Romans, but many of their customs were integrated into the Roman culture. Interestingly, Italian ceramics are perhaps one of the few commodities that were once used by all people equally in ancient times. It didn’t matter if you were a slave or an emperor, pottery was a fundamental craft that provided many necessary household items for everyday use.

Over the last several hundred years, the Amalfi Coast has truly emerged as the heart of Italian ceramics. This is, in part, due to the red European clay and limestone mixture that is found along the region’s famous cliffs. This perfect blend allows for optimal sculping, molding, and firing capabilities — the foundation for great pottery making.

If you’ve ever been to the seaside towns that make up the Amalfi Coast, you’re guaranteed to remember the vibrant Italian ceramic shops that line every street and border every piazza. If you haven’t been, you’ve likely seen pictures that detail this iconic region. Overflowing with dishes, tables, tiles, utensils and more, you can’t help but to meander through a ceramic store, or five, as you go deeper into the heart of these colorful towns.

With Italian ceramics, there is something for everyone. You’ll find rich blues that mimic the sea, and bold yellows that highlight the Italian sun. Reds, and greens, and oranges adorn the shop walls packed full of pottery pleasures. Many stores advertise, and politely brag, that their ceramics are fatto a mano or dipinto a mano — handmade or handpainted. You’ll see the shop signs and the inscriptions on the actual ceramics themselves that certify this. Locals and visitors alike would expect nothing less.

The Amalfi Coast as one unified powerhouse for Italian ceramics really has a single town to thank for this fame. It’s true, by the 15th century, the Amalfi Coast had solidified its ranks as the most famous place for producing Italian ceramics. By the 18th century, the town of Vietri sul Mare emerged as the biggest epicenter for ceramic production and continued to draw hundreds of artists to the area for this local industry. This small, and often-overlooked town has remained the hub of Amalfi Coast ceramics, and in fact, most pieces that are sold in Amalfi and Positano are made in Vietri sul Mare.

This historic town, located near the northern entrance of Salerno, has its origins as part of the ancient Etruscan town of Marcina. According to archeological findings, Marcina was the first Etruscan coastal settlement turned Roman port, which served as a major landmark for various trade industries. As previously mentioned, the Etruscan people who utilized and perfected the art of pottery and ceramics also lends an interesting connection to Vietri sul Mare’s history and development.

The dedicated craft of handmade pottery in Vietri sul Mare is a centuries-old tradition that is still carried on by many local factories. The ceramics produced here are true masterpieces and have become a symbol of the town. Each piece of pottery is unique, and you’ll never find an exact, perfect duplication.

The production of this town’s prized Italian ceramics is a long and meticulous one. The first phase involves molding the clay with a lathe to develop the shape and structure of that particular piece. It then cooks in a kiln until dried and cured, followed by a phase of glazing. To give the ceramics their signature sheen, the piece is then polished with a white medium before being sent off to the eager hands of an artist to be hand-painted. A final cooking process is done after the piece has been painted, and this is the secret to developing the Amalfi Coast’s recognizably bold colors its ceramics are known for.

Ceramica Artistica Solimene: A leader in Italian ceramics of the Amalfi Coast

The gem of Vietri sul Mare could easily be awarded to the leading ceramics factory called Ceramica Artistica Solimene. The family owners and artisans here proudly claim that craft becomes art when creating ceramics. Founder Vincenzo Solimene has a centuries-old family history in the ceramic business, and he himself has been in operation since 1947. Their now famous factory was the vision of architect Paolo Soleri who led its construction from 1951 to 1954.

Vincenzo and his artists take pride in their handmade craftmanship that honors ancient techniques from start to finish. Ceramica Artistica Solimene exports their highly desired Italian ceramics all around the world, but you can also visit their factory for a unique experience. In addition to their factory production, they also hold exhibitions and ceramic courses for interested young artists thanks to the Centro Studi D’Arte Vietrese.

If future travels bring you to the Amalfi Coast, whether it’s your first time or your fifth, perhaps now you’ll have a new understanding of this region’s dedicated craft. Along every well-traveled, cobblestone street in this stretch of Italy, you’ll find the familiar and bustling ceramic shops that beckon you in with their addicting patterns and signature colors. And perhaps in one of these family-owned shops you’ll find your perfect, one-of-a-kind piece.