Uniti We Stand? What The State of The Union Speech Means for Italy

Ursula Von der Leyen's State of the Union speech was light on substance but heavy on sentiment. What does it mean for Italy's role in Europe? 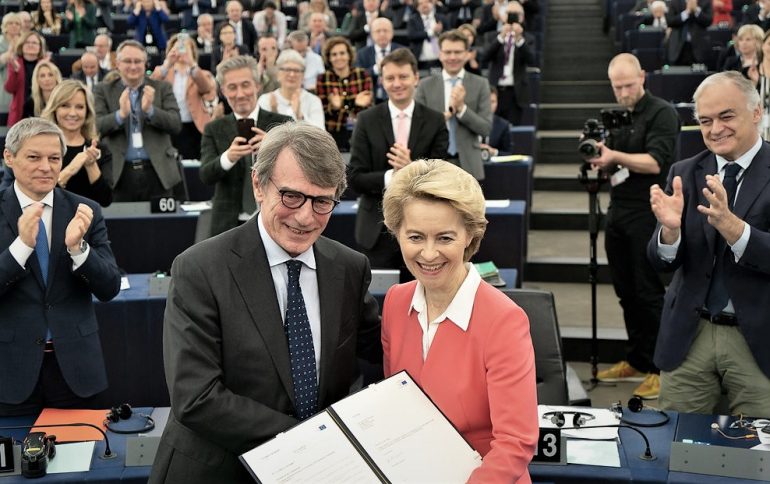 After one of the toughest years in its history, the European Union had plenty to applaud in the 2020-2021 State of the Union address. Though it is an important touchstone in illustrating the program of the bloc, the EU version is much less well known than its American counterpart. The EU President, Ursula Von der Leyen, delivered her remarks on a weekday morning, making it very difficult for most working Europeans to tune in or take much of an interest. By contrast, the US State of the Union Address was watched by about 27 million viewers across the country and is always scheduled for prime time viewing in the evening. However, the progress of the EU both in real and symbolic terms is a subject that concerns hundreds of millions of us, and one which concerns democratic processes more than patriotic platitudes.

The ‘European Way’, for better or worse

President Von der Leyen’s first remarks were naturally towards the health system and civic participation in light of the COVID-19 emergency.  More than 70% of adults in the EU are now fully vaccinated, and vaccines are being distributed to countries with fewer resources at a steady pace. With more than 1 billion euro pledged to mRNA vaccine research in Africa and another 50 billion euro dedicated to emergency preparedness by 2027, Von der Layen made clear that the EU would be taking a stronger stance on the global stage. Indeed, her remarks about vaccine rates are telling: “we did it the right way because we did it the European way.” The ‘European Way’ may still need some time to develop, but the unified response to the pandemic is a huge step in that direction.

The urgency of the climate crisis followed, in particular the participation of younger citizens in climate actions, protests and other forms of engagement. Indeed, these and other actions propelled leaders to name 2022 the Year of European Youth in honor of children and young adults who were forced to stay inside during the pandemic. Von der Leyen pointed to the Fit for 55  as a concrete step towards tangible goals and connected this to the European intention to put a price on pollution. As she stated, “asking big companies to pay the right amount of tax is not only a question of public finances but above all a question of basic fairness.” She also announced that the EU will double its external funding for biodiversity, in particular towards the most vulnerable countries.

On foreign policy, Von der Leyen walked a tightrope. She reiterated that human rights are not for sale and human beings are not bargaining chips, pointing to the quick reaction of EU diplomats in Afghanistan. While she pledged funds for assistance to Afghanistan, she remained vague on details. However, this could be the impetus to speed up the process of an EU migration system management: the Pact on migration proposed in September of last year is still on hold by the Member States.

Von der Leyen also spoke of the need for European tech sovereignty but didn’t go into further details. Europe is still almost completely dependent on Asia for the production of microprocessors and though the NextGeneration EU plan is ambitious, it doesn’t promise to close the gap on technology and research.

Following the speech, MPs nonetheless criticized the lack of major news or any indication of a shift in the Commission’s perspective. Many underlined that they were hoping for something more dynamic: the green factions were particularly vocal about a lack of strategic direction. In one of many examples, Italian MP Eleonora Levi from Europa Verde questioned the omission of talk about intensive animal farming or bio agriculture solutions. Generally speaking, energy independence is a sore topic in the current climate of a green transition, and Von der Leyen didn’t bring it up. Neither did she mention the need to create new jobs and opportunities, though she did highlight the creation of ALMA, a program for people not enrolled in university that allows them to gain work experience in another country. This could be a great initiative but lacks the strict regulations that would prevent employers from abusing it so for now, it remains abstract.

All things considered, the speech was heavy on emotion if light on substance. The centrepiece of the speech was the hymn to young people, with Bebe Vio serving as the spokeswoman. Despite the light touch, President Von der Leyen’s pragmatism didn’t go unnoticed; she affirmed once more her tendency of getting straight to the point.

Von der Leyen emphasized unity, and it was surely not by chance. Slovakia or Hungary have been veering to the extreme right, and elections in France and Germany promise to change the playing field for years to come. The incoming Italian President might also change the complexion of Europe, and Von der Leyen might find herself alone on a stage where her closest allies once flanked her.

The future of the state, the state of the future

The German election results on September 26 were something of a surprise to many EU watchers and the rise of the SPD means that the particulars of the coalition to follow are anything but determined. The 2017 elections took months to form a coalition and that was with Angela Merkel at the helm, a consistent feature that has now come to an end. Of course, Merkel could remain chancellor until December, meaning the EU would close out the year with a few familiar faces in the drivers seat.

However Italy, as the current G20 Presidency holder, has taken an ever more prominent role on the EU chessboard and Mario Draghi is living up to the expectations of a dependable if not entirely charismatic leader. Italy may be a crucial decision-maker on the topic of defense, as both Germany and France are facing internal divisions and shifts as the result of elections.

To be sure, Italy will be watching the German situation intently. As the largest trading partner for both imports and exports, any significant changes will reverberate across Europe. As the Italian Government’s Economic Observatory underlines, the volume of bilateral trade in 2020 was approximately 114.5 billion euro. This could change and even improve, but Italy and Draghi need to stay close to the new coalition and create even more ties with the German presidency. It will be a balancing act on Draghi’s part, and there is no guarantee that the incoming German leader will assume the same benevolent role that Merkel has played. But as European President David Sassoli noted, “After this historic crisis, there is no time to lose: Europe needs a strong and reliable partner in Berlin to continue our common work for a social and green recovery.”

Ultimately the State of the European Union speech showed that despite internal divisions and external pressures, the bloc has persevered and even begun prospering. Whatever the incoming coalitions look to be, they will have a more united EU to contend with.