Opening up to the debate on the legalization of euthanasia is just another step of rapprochement with death. Maybe we're ready now. 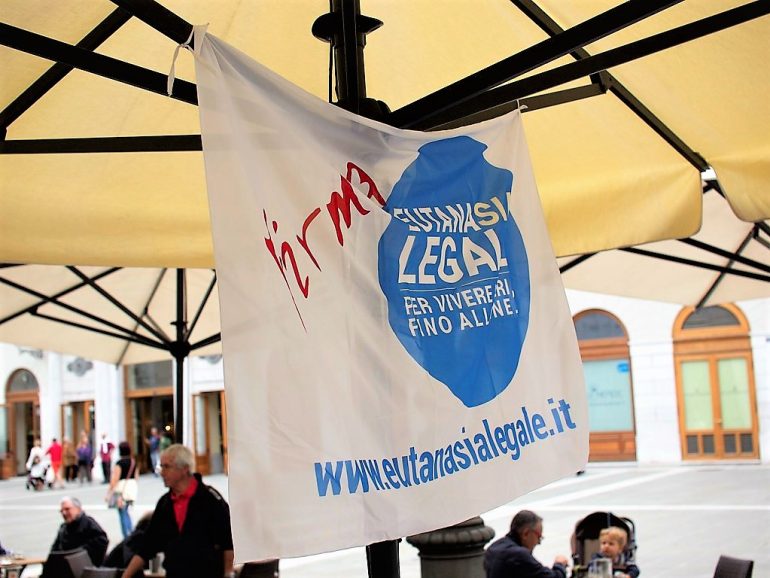 Conference on the legalization of euthanasia in Trieste, 2014. Photo: Marco Gentili, CC BY-NC-SA 2.0 via Flickr.

The bond between life and death is very fascinating and reflects how both elements are strongly intertwined. Euthanasia represents one example of this relationship: where life and death come together, where the right to life and the right to death clash. This contrast is revived in Italy with the ongoing debate about legal euthanasia.

The political and social debates are supported by the recent national campaign backed the Luca Coscioni Association, one of the main Italian organizations at the forefront in the fight for self-determination. Euthanasia’s legalization has been indeed a central issue in political terms, obviously generating fractures in the whole parliamentary spectrum. Currently, Italian legal framework leaves a certain degree to interpretate the law in terms of ethics and medical background. Nevertheless, it clearly punishes assisted suicide which unfortunately doesn’t have a shared definition among the medical community. Aiming at challenging how the things stand, in 2013 over 70,000 signatures were collected in favor of a change of pace regarding euthanasia.

However, the first attempt to promote a law in favor of this practice didn’t have much success. In that occasion, no matter the large civic participation but the popular mobilization didn’t succeed in pushing forward the political debate. On the contrary, 2022 may be the right year to see a new national referendum on the legalization of euthanasia in Italy. As a matter of fact, in parallel to the election of the new President of the Italian Republic, Italians will also have the chance to finally express their opinions on this procedure. It may mark a historical moment for the country, aligning Italy to other countries in Europe which have already enacted a law on it. The Netherlands, Belgium, the Northern countries, and the latest update of the Spanish law are just few examples of the legislative path of euthanasia in Europe. The recent success of this initiative in Italy is reflected by the collection of over 900,000 signatures, far beyond the required minimum for a referendum.

This may be a sign of the changing times. Are we finally ready to have the freedom to die when and how we chose? It surely represents a step forward in the fight for rights of ill people made famous by painful public disputes — from the Welby case in 2006, the story of Eluana Englaro in 2009, to Dj Fabo’s trip to Switzerland to peacefully die. These are just few names to mention among those who have struggled and keep striving in the present to overcome bureaucratic and legal obstacles to freely die. In other words, in Italy the issue goes deeper than we really know. The downside of not having an updated legislative framework regarding euthanasia is the eventual obligation to engage in unlawful practices, the abuse of substances or committing suicide to avoid suffering further. Moreover, considering we are living in a country where over 75% of the population is in favor of the so-called good death — buona morte — then why it is so hard to get this law approved?

On one hand, it almost seems that the concept of death is taboo, as something people need to deal with only behind closed doors. On the other hand, euthanasia forces us to rethink about our personal ethics, eventually challenging our social beliefs and our approach to death. What this choice would mean for many terminal patients represents a solution to their pain and their family’s sufferings. For many, euthanasia isn’t considered in a selfish way but a practice to provide them a dignified death instead of unnecessarily prolonging the illness.

The recent global pandemic has made us open our eyes in front of death, reducing the aura of privacy around mourning and feeling pain. We’ve become more aware about the importance of living a meaningful life, sharing common fears while discussing on how to overcome anxiety and mental illnesses. Opening up to the debate on the legalization of euthanasia is just another step of rapprochement with death, and many Italians seem to be ready to take a side on the matter.