How can a film shot seventy years ago be so captivating and relevant today? 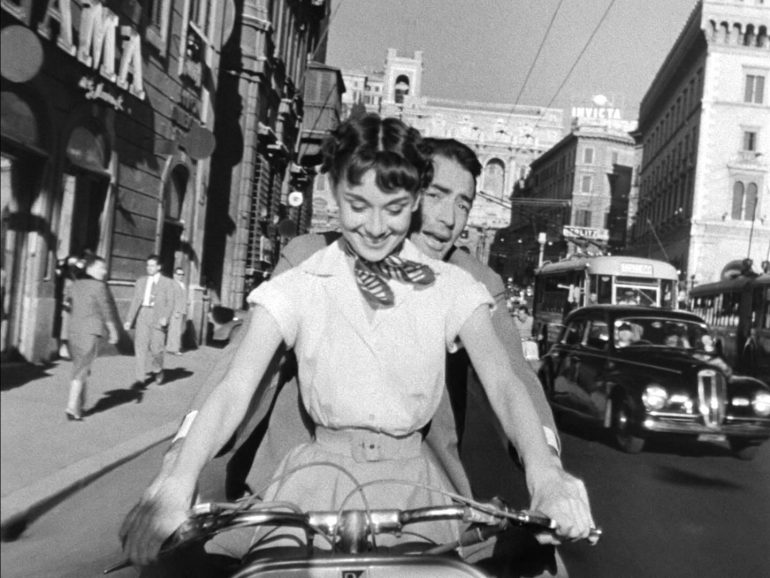 Roman Holiday defined an era. If you haven’t seen it, it’s easily summarized. Shot in 1953 and directed by William Wyler, Audrey Hepburn plays the exquisite Princess Anne, from an unspecified country on an official visit to a beautifully portrayed Rome. She eludes her minders and, incognito, finds romance with a savvy American journalist, Joe Bradley, played by Gregory Peck. They have a royal time and then must go their separate ways.

How, you may ask, can a film shot seventy years ago be so captivating and relevant today? The answer is complex but it’s safe to say that it’s a multi-layered structure that involved many professionals in making it an enduring masterpiece.

To begin with, the chemistry between the young lovers is convincing and testimony to good acting and even better directing. And the context is credible. Constantly advised, overprotected, and bored with her royal duties, Princess Anne evades her protectors and sneaks out at night to see how ordinary Italians live. After discovering her identity, Bradley charms the runaway princess to obtain an exclusive scoop that he sees himself writing. He involves a photographer friend and they arrange to spend the day with her. Through the photographers eyes, we get shots of the princess at a café ordering champagne for lunch; smoking her ‘very first’ cigarette; dancing on a barge on the Tiber river; hitting the royal agents with beer bottles; and testing the legend of The Mouth of Truth. Rome never looked so well. A far cry, I might say, from the same city recently decribed in an unbeat article entitled Taxis in Rome published here by the witty columnist Lina Pezzi.

Audiences were enraptured by the story and by both Hepburn and Peck. In the context of memories of what was then the recent drab experience of war, they provided what was in short supply — innocence and fun. Peck provided an image of the macho American who, it the end, turns out to be a true gentleman. Hepburn is naturally graceful, carefree and liberated; modern, yet very ladylike. She received an Oscar for Best Actress in recognition of her charm and her great acting ability. Speaking of awards, between Oscars and Baftas the film won a total of ten.

Roman Holiday is the counter model of the traditional fairy tale. We have a fiercely independent princess who longs for the freedom to be ordinary.  Maybe the fact that Princess Margaret, the sister of the real-life Queen Elizabeth of Britain was living her own unhappy-ever-after fairy tale with a ‘commoner’ the divorced and, thus, unacceptable, Guard Captain Peter Townsend led more credibility to an impossible fairy tale that people wanted to engross themselves in.

And the emotional pull in this movie is best achieved in the final scene: it is a testament to the brilliance of the screenplay and of the two lead actors that no words are spoken. There is no need for them. It’s all in the looks they exchange. The lovers are ennobled by their personal sacrifice, and the effect is deeply moving. It reflects a time when feelings were often best transmitted by supressing emotion and personal desire rather than expressing it.

As we said, Roman Holiday defined an era. Hepburn’s rise as a film star coincided with her rise as a fashion icon. After a long period of austerity, haute couture was making a post-war comeback in the 1950s. Attractive waistlines, flowing fabrics and young, romantic styles replaced the practical functionality of wartime women’s wear. Hepburn brought something that war-weary American audiences were longing for — a fresh face and a new beginning. Cheeky accessories were celebrated after nearly a decade of plain, boxy, utilitarian garments.

For American costume designer Edith Head, winner of eight Academy Awards, Hepburn was “a designer’s dream,” as she wrote in the Los Angeles Times in November 1954, “a girl whose figure and flair told me at once, here was a girl born to make designers happy.” Head understood the direction fashion was taking and created what would remain for decades the standard of charm and elegance. We see Hepburn in, for example, Jacqueline Kennedy, Sophia Loren, Grace Kelley and in many of the British and European Royal ladies.

She inspired one of America’s post-war ideas of beauty, even though she did not represent the dominant ideal of female physicality in US culture or films of the 1950s. Rather, Hepburn, flat-chested and slim-hipped was a counter model to the hypersexualized stars such as Marilyn Monroe, Elizabeth Taylor and Jane Russell that dominated the era. She exuded a more modest, waif-like femininity that was itself a very alluring image. With the film’s release, the press and audiences alike were enchanted by these qualities. Just as Hepburn as an actress was the anthesis of the typical star of the day she was what the public craved.  Whereas it just wouldn’t be appropriate — or possible, in most cases — for women to traipse around dressed like Marilyn Monroe in Gentlemen Prefer Blondes set in 1953 Paris, Hepburn’s wide belt, flat sandals and cute haircut could be easily replicated in real life.

Rome as a star of the film Roman Holiday

Rome was depicted as a city arising majestically to show that war-torn cities, communities and individuals could be restored. Many consider Roman Holiday as the quintessential tourism film, as it is said to have inspired a generation of Americans to travel to the Italian capital. The Vespa image is etched in our collective minds: the incognito royal in a plain white shirt with the sleeves rolled up and a scarf tied breezily around her neck as she zips, riding side-saddle through the city overtaking the new family-cars that were thronging the streets. What it did for the motor industry in Italy was as unexpected a blessing as what it did for the Italian tourist and food industry. For women in cinema audiences in post-war Europe it was as if a tap had been turned on and fashion, mopeds, cars, gelati, sightseeing, smoking, jazz, cinema, passion were all acceptable and within their grasp. Roman Holiday offered an uncomplicated look and lifestyle that women and men could attain without compromising their integrity.

The other film behind Roman Holiday

We must not forget the reality of filmmaking in the decade between the late fifties in post-war America. The slogan blazoned across many newspapers and billboards was “Americans, you can drive the Reds out of television, radio and Hollywood.” Conservative America drank it down.

In 1947, Dalton Trumbo, a renowned Hollywood scriptwriter was summoned to appear before the Un-American Activities Committee of the US Congress and asked whether he had ever been a Communist. His vague answer put him on Senator McCarthy’s list, one of the ‘Hollywood ten’ blacklisted for refusing to cooperate with the anti-Communist witch hunt during the Cold War. When Roman Holiday won the Best Writer Award, Ian McLellan Hunter’s name was used instead of Trumbo’s who did not receive a credit until the film was released on DVD in 2003. On December 19, 2011, full credit for Trumbo’s work was restored and a film of his name telling about this ungracious time in American politics and starring Bryon Cranston was released in 2015.

Some of the many layers of a film that’s much more than a romantic story between two attractive people.