On the charms and mischief of Roman taxi drivers. 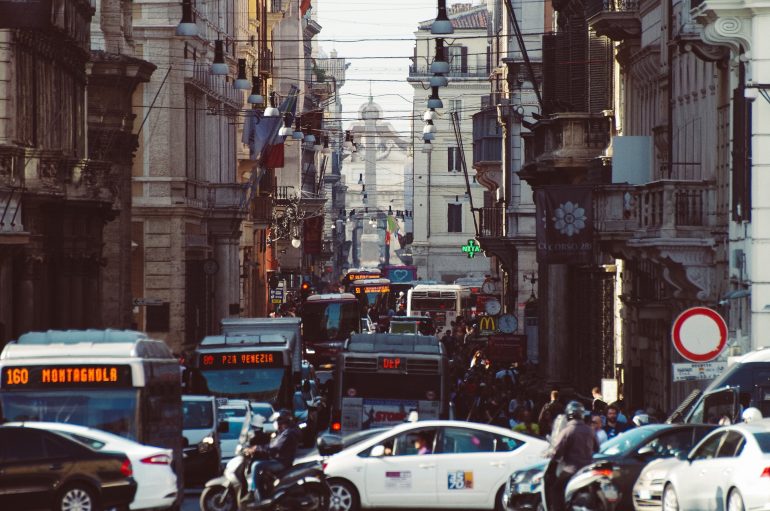 On my way to Southern Italy, I stopped in Rome. Leaving Roma Termini train station, I noticed something different. Whenever I exit the station, there’s always a small welcome committee of non-licensed taxi drivers trying to attract clients. This time, though, no. I have a long-standing feud with the taxi drivers of Rome, but as it always happens with old enemies, I had grown affection for them. So, somehow I missed them. Our war has been on and off for the past 10 years.

It all started in 2012. I was going to Rome with a group of university friends for a summit at the Accademia dei Lincei. Our trip was entirely organized by our university, apart from the four-kilometer transfer from Roma Termini to our hotel in Trastevere. On the train, we’d agreed that it was a good idea to take a taxi, as — being four — the expense would have been commensurate with our student means.

Leaving the train, we strolled boldly towards the main door to exit the station. There, we were intercepted by a smiling man who asked us politely if we needed a taxi. We were so pleased to have our needs met so quickly, nicely and effortlessly, that we replied — also smiling — that a transfer would be most welcome. The man started leading the way.

But I soon noticed that the guy was leading us far away from the taxi queue and I asked where we were going. He soon replied that he had parked in the parking lot. I grew suspicious.

“How much would it be from here to Trastevere?”

“What with all the baggage, the four of you, and the traffic, about €40,” he replied.

I just said plainly: “I am not paying €40 for a four kilometers trip, let’s get queuing.”

The guy lost, and we won. A few minutes later, I was pleased that we paid only €15 in total for our transfer and established myself as the wise leader of the group.

So, this was the first incident that started the feud between me and the taxi drivers in Rome. I was the offended part as it was started by that unlicensed taxi driver in Roma Termini. From that moment on, I have learned always to distrust taxi drivers in Rome and to defend myself from them almost always successfully.

I did not want my friend to pick me up at the airport, so I checked the situation with the taxis. First of all, I noticed a sort of coordinator, taking the destinations, fixing prices, and indicating who was the one to do the ride. That I found strange, but I figured it a way to ensure a stability of prices to preserve the fair competition among taxi drivers — but also to keep them artificially inflated, as prices were significantly higher than the fee that the taxi drivers union had agreed with the City of Rome.

“Dove devi annà, signorì?” (Where do you have to go, fair maiden?), the coordinator asked me.

“I have to go to the Nomentana.” This reply was a mistake, as I immediately gave away my status as a tourist.

“What? No, no worries, I will ask my friends to pick me up.”

“As you wish,” the coordinator said as he moved on to those behind me in the queue.

And so I changed strategy. I decided to take advantage of my competitiveness as the last client. The value of a last possibility for a ride is immense, so, I waited for my contractual power to rise. When the sidewalk started to empty, a taxi driver approached me.

“Have you already asked?”

“Batteria Nomentana.” I raised my status, by using the Roman name of the locality I had to reach and affecting a slight local accent.

“Mmm, and how much have they asked you?”

This brief exchange sounds simple, but don’t underestimate the craft. Firstly, I disguised myself in Roman slang, so the driver would recognize me as one of his own. Secondly, he actively refused to give me a price. Instead, with reference to an unnamed “they,” he asked how much I was willing to pay. It was pure theater, because he knew I was lying, but played along, sealing our deal and pact of secrecy: we’re going to Fiumicino.

On the way to Batteria Nomentana, he felt chatty. He gave me a lesson on International Relations, explaining how the Americans had destabilized the Mediterranean and made Berlusconi’s government fail as he was a friend of Putin. Since I didn’t want an argument, I took this as an ethnographic experience in global governance seen by the man on the street, so I listened with attention and emitted only simple sounds of acknowledgement. He must have spotted that global governance was not my strong suit, so he asked about me and my work. He must have inferred I was some sort of an expert in education, so he began to ask for advice on what to do about his son, who was inept at school to the great dismay of the whole family. I learned a lot about this boy, and also about his uncle, who is apparently a savant and, if unleashed on Rome, would be able to describe in detail the life, death and miracles of whichever stone, building or artistic piece. The taxi driver concluded: “C’ha ‘na gran capoccia, ma nun è pratico” (He has an immense mind, but not much practical sense), underlining the concept with big gestures of his right hand.

Once we arrived at my destination, I paid and noticed he was not leaving. “Is there any problem?” I asked.

“No, I am just waiting for you to get inside so that I know you are safe.” I was moved by this paternal care and I almost thought to make peace with the taxi drivers of Rome.

My resolution was almost sealed after another fine experience with the taxi drivers of Rome. I needed to sit an exam because my English language certification was expiring. I checked the examination centers of the country currently hosting me and there were no places. So, I checked the neighboring countries, but there were no spots available. The issue was getting urgent, so I booked a spot in Rome.

I picked a bed and breakfast nearby the location of the test center. However, the oral exam was to be held nearby Trinità dei Monti, about 10 kilometers from my bed and breakfast. I decided to take a train and then walk in the center to arrive an hour before my exam. I left at 8 to be at the place at 10 and to sit my exam at 10.40. I arrived at the train station, but there was a sudden strike. I tried taking a bus, but it never arrived. I tried another bus to arrive at a metro station, but at that point I would have never arrived on time. Instead, I called a taxi, which led me to my destination almost on time. I arrived and I was called to sit the exam.

I was buoyed by these two experiences. However, in 2020, I was again the victim of an offence at the hands of the taxi drivers of Rome. This time, I landed in Fiumicino, and I could not get a train as I would arrive too late for my meeting. So, remembering favorably the last taxi drivers I met a few years before, I decided to try once again my luck. I was reassured by the lack of the coordinator setting prices and the presence of immense posters declaring that the taxis of Roma Capitale would only accept a €50 fee for a single trip to central Rome. I queued without any worries, but noticed a smaller poster stating that the taxis of another municipality around Rome could instead activate the taximeter.

Without any worry whatsoever, I boarded a taxi. But a few kilometers away from the airport I noticed that the taximeter was on and that the taxi was showing the fact that it was part of the fleet of the other municipality only inside. “Well played, nice game,” I thought with admiration when I parted from my money, and the mask which I left on the seat.

So, after many years of dealing with some taxi drivers of Rome, I’ve reached a conclusion: if you can’t avoid them, be careful. You may meet charming and romantic renegades constantly battling against the traffic and other drivers to ensure their survival. I think that their job is very hard and not all the money in the world would be enough to compensate them for having to drive day after day in Rome. Sure, it is a mors tua vita mea approach, but it is a fine game of intelligence where only the smartest will emerge victorious. Sure, it can be a more expensive past time than the Settimana Enigmistica, but the public needs to know. So, take advantage of my experience and be warned: once in Rome, do as the Romans do. Or at least try: they are difficult to outsmart.