A twist on the rampant invisibility of Black people in the Italian media landscape, Zero is a bright spot and a breakthrough. 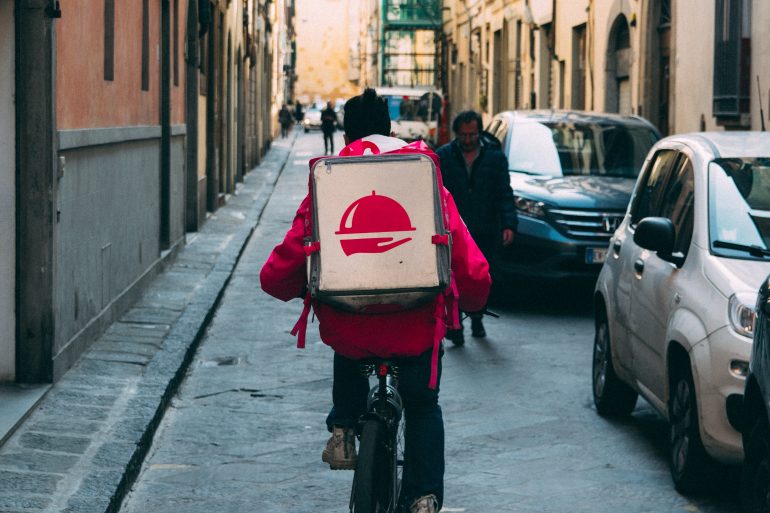 When Netflix Italia’s new TV series Zero was premiered in April 2021, it was an instant hit and its popularity sky-rocketed amongst national and foreign audiences. It was also a milestone for Italian television, being the first time that an Italian production had Afro-Italian characters as protagonists and a predominantly Black cast.

The world of Zero is a niche genre, a rom-com and urban comedy mixed with some magical realism and a superhero touch. The series follows Omar, the lead character, a first generation Italian and a delivery worker who lives in the fictional low-income area of Il Barrio in Milan. Omar’s life has many challenges, his neighborhood is getting gentrified, the electricity is out, and his Senegalese father struggles to pay the rent. He dreams of going to an art school in Belgium and becoming a comic book artist. His world seems pretty mundane, going from deliveries to deliveries, and no one seems to notice him. One day everything changes for Omar: while running away from a bully, he evaporates into thin air. Yes, Omar has the power to become invisible. A coming-of-age story full of societal metaphors and universal messages, Zero is the new show we all need. A twist on the rampant invisibility of Black people in the Italian media landscape, Zero is a bright spot and a breakthrough.

Screenwriter, novelist and a comic book author Antonio Dikele Distefano is the creator of the series. A first-generation Italian to Angolan parents, Distefano was born in Busto Arsizio and grew up in Puglia and Romagna before moving to Milan, where he currently lives. A prolific author, he has published five novels including I have never been my age in 2018 which Zero is based on.

Antonio was first approached by Netflix through his editor, who told him they wanted to depict his world. At that time, his path crossed screenwriter Stefano Voltaggio who wanted to bring a project to Netflix. Together they partnered with the comic artist Menotti and screenwriter Massimo Vavassori and they wrote their first treatment. It was greenlit.

Their research process was conducted on the field in the vicinity of Milan. While the neighborhood of Il Barrio, is imaginary, it is based on the Milanese suburb of Barona, where Antonio Dekele Distefanio and his team found their preliminary inspiration: “We frequented Barona for a long time — which as a suburb is certainly much more likeable than others — to talk with the guys who live there to get to know their ideas: this comparison has profoundly transformed the drafting of Zero, especially on the idea of ​​being invisible.” He was also pleasantly surprised when getting there: “The first two weeks of writing we were in Milan, and I proposed to the writing group that we go to Il Barrio and talk to kids there. Since half the writing room is from Rome, they expected it to be run-down and degraded. Instead, the grass was freshly cut; it was all clean. But we met a group of kids who told us they were being pushed out of the neighborhood. That’s where we got the initial idea.” he shares in an interview for Variety.

The creative process behind it

Antonio’s team is also interesting; his writing room has many women screenwriters, and we can count amongst the project’s directors Mohamed Hossameldin, who is Italian-Egyptian. Prior to joining the team, Mohamed Hossameldin had directed a few short films and was preparing for his first feature. Working with primarily first time actors was of course a challenge for Mohamed, but also something exciting. In an interview for Colory*, a platform which focuses on shedding the light on rarely represented Italian voices and minorities, he also notes how groundbreaking Zero is: “Right from the start I thought of Zero as the first step in a historical change for all people with the same history as me. I am thrilled to be part of it.”

While it is refreshing to see diverse talent in front and behind the camera, one must not forget that, after all, Zero is a Netflix production and that Italian public channels have yet to come a long way. Netflix is based in the United States and has a commitment to spending $100 million yearly to improve diversity. The Italian production company behind Zero, Fabula pictures, has previously brought to life the acclaimed TV show Baby — while it was the voice of gen Z in Rome, it features no Black Italians. We still have a long way to go.

Sara Lemlem, an activist and journalist who was part of a group of second-generation Italians protesting racist tropes on Italian TV, shared her experience: “As a Black Italian, I never saw myself represented in Italian television. Or rather, I saw examples of how Black women were hyper-sexualized.” She adds: “There was never a Black woman in a role of an everyday woman: a Black student, a Black nurse, a Black teacher. I never saw myself represented in the country in which I was born and raised.”

One certainly remembers the racist gaffes done by Rai — the use of black face by actor Sergio Muniz when imitating the rapper Ghali who is of Tunisian origin on an extremely popular variety show. Following the incident, Afro-Italians made a public appeal supported by many activist groups  to Rai’s executives. The #CambieRai initiative was launched with the goal of educating Italian audiences on the implications of racist statements and choices on public television. In their statement Rai promised that they would prevent it on their screens, hypocrisy or a tiny step in the right direction, it’s hard to tell.

If you are interested in learning more about Black-Italian representation in the media, one documentary is a must-watch. Blaxploitalian, 100 Years of Blackness in Italian Cinema was released in 2016, long before the topics of diversity and representation made headline news. It was part of a media diversity campaign called ‘United Artists of Italy’, which was led by the documentary director Fred Kudjo Kuwornu, who had partnered with other  Italian creatives. BlaxploItalian is “a diasporic, hybrid, critical, and cosmopolitan dimension documentary that uncovers the careers of a population of entertainers seldom heard from before: Black actors in Italian cinema starting from 1915 when the first black actor appeared in an Italian film.” It has screened at multiple prestigious film festivals including Rome Cinema Fest. A portrayal of the artists who shaped Italian media and cinema, Fred Kujdo Kuwornu interviews Black-Italian popular personalities and lesser known actors. The question of identity is at the core of his work, another his documentaries 18 lus Soli is about the issues concerning the lack of right of soil for Italian-born children to foreign parents. In Italy, over 800,000 children are born and raised in the country, yet do not have access to citizenship. Their voices deserve a space on the big screen.

Little by little members of generation Z and Y who are first or second generation Italian, speak up and pave the way towards change. Bellamy is the founder of AfroItalian Souls, a digital platform which focuses on global Black culture and the African diaspora in Italy. Eager to allow content creators to tell their stories, she offers news and cultural coverages, workshops and video content. Bellamy grew up in Piedmont and is half Ugandan and Sudanese. The content offered on her platform is all-encompassing: skincare tips, Black-owned clothing brands coverage, book reviews and a podcast named Equalitalk that discusses discrimination and racism in Italy.

It is very exciting to see new initiatives taken by Italian content creators who are rarely represented in the Italian media. While public televisions channels are still behind, there is still time to demand that fellowships and other opportunities be put into place to give room for artists to create, but also allow for things to be changed from the inside out: a clear pathway for first and second generation Italians towards producer, showrunner and executives positions.

What the future holds

Zero’s creator, Antonio Dikele Distefano, continues to see his art “as an agent for change.” Today, he is working on a film now where his goal is to have a 70% second-generation Italian cast and crew. “The battle is to live in a place where we all have the same opportunity, where there are more writers who are Black, Asian, South American, where there is the possibility to tell the stories from the point of view of those who live it,” he continues. Upon the release of the series, its lead actor Giuseppe Dave Seke — who plays Omar — gave an interview in the neighborhood that inspired the series. Italian schoolchildren jumped on him, asking for autographs. The heroes we needed have arrived and are here to stay.