How Young Neapolitans Use Catacombs To Advance Their Future

Offering positive alternatives and hope to the youth of the Rione Sanità made visitors to the San Gennaro catacombs increase fivefold. 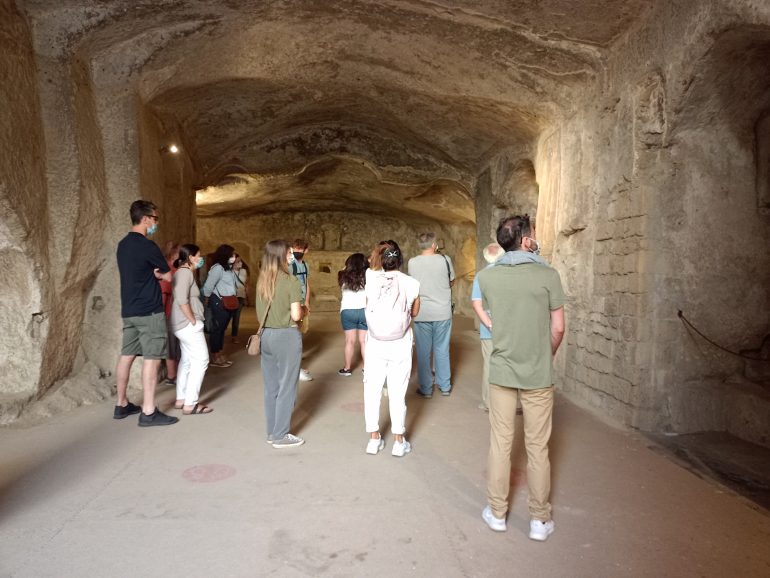 When you think of places to go to in Naples, the Sansevero chappel, Spanish quarter or Via dei Tribunali in the city center usually come to mind. Although equally exciting, the infamous Rione Sanità neigborhood hasn’t been on the tourist radar. On the contrary, both visitors and locals avoided it because of its bad reputation caused by crime, drug deal and murders. Or so it was until some years ago when the area started to change thanks to a group of young residents who founded the La Paranza social cooperative and won a tender to invest in the renovation of the then abandoned Catacombs of San Gennaro, situated in the northern part of the suburb.

Then they have cleaned up the area, fixed the electrical system, formed the guides and started showing hitherto unknown curiosities of ‘underground Naples’ to foreign and domestic visitors.

But how much have they achieved over the past ten years?

A lot, according to the recent study conducted by Luigi Vanvitelli from the Department of Economics of the University of Campania and the Department of Social Sciences of the University of Naples Federico II. The research evaluated the social and economic impact that the project generated on Naples, showing that the visitors to the Catacombs have climbed from 5,000 to 150,000 in just a decade.

“A sensational growth,” president of La Paranza Giovanni Maraviglia told Vita Magazine, “which is not matched by any other site or cultural asset in the city. The number of employees increased from 5 to 34. And for over 60% of the visitors, the Catacombs have been one of the fundamental reasons to visit Naples.”

Enhancing the artistic and cultural heritage of the neighborhood is one of the main activities of young Neapolitans. The beauty of its sites is an attraction for tourists, Italians and foreigners, and contributes to the integration of the district in the urban productivity system.

Not only do they bring tourists in Rione Sanità for guided visits to the Catacombs, but they also offer overnight stays to tourists. For example, Casa del Monacone and Casa Tolentino are the results of two projects for the reclamation and development of local resources. These two accommodation facilities, created from renovated convent buildings, allow tourists and pilgrims to spend a few days in Naples and fully experience Rione Sanità.

Offering positive alternatives and hope to the youth of the district made visitors to the Catacombs increase fivefold, and a local social economy has developed, giving rise to a network of small cooperatives and artisans. All positive examples which show that for Naples there can be a better future.

“Light unexpectedly reveals itself in the darkness,” is what is written on the homepage of the Catacombs of Naples. And that’s a perfectly suitable metaphore for what has been happening in Rione Sanità over the last decade thanks to its youth.