Italian Songwriters You Should Listen To: Fulminacci 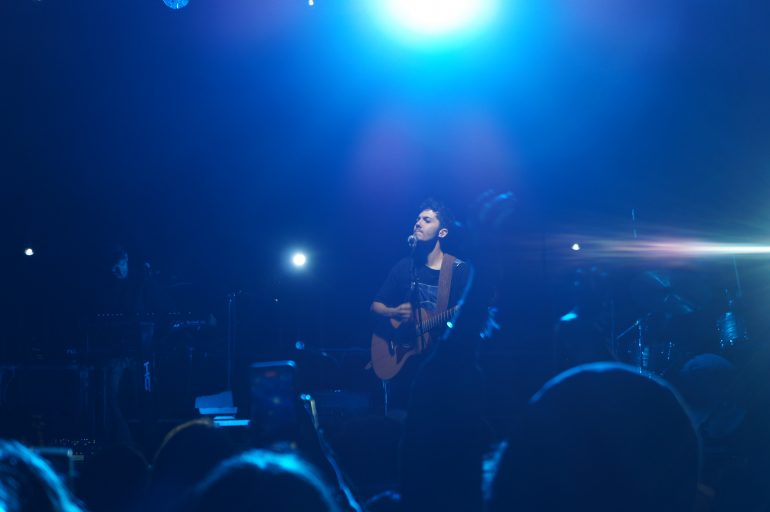 Some days ago I’ve finally attended a live concert after a long period of restrictions and lockdowns. I was in Morrovalle, Macerata, on the occasion of the Morro Festival — organized by Eclissi Eventi — to listen to Fulminacci, a young and talented singer-songwriter.

The stage name Fulminacci, as the artist himself explained, is the combination of his name and his surname, Filippo Uttinacci, which he doesn’t like very much. It recalls the Italian word fulmine (lightning) — he also uses a bolt of lightning as a symbol — and quite ironically it was supposed to rain during the concert. However, the lightning on stage was the real star of the night, so the sky decided not to interfere.

Beside the warmly lit church of Saint Francis, the singer performed in front of what looked like a close-knit group of friends. The atmosphere was intimate but energic, and the dialogue between the audience and the musicians on the stage was intense. Such a cozy, snug location was just perfect, as it gave you the feeling that you weren’t just a person in the crowd, a spectator, but an integral part of the moment, the direct recipient of the singer’s musical communication.

Fulminacci was born in Rome in 1997. He writes, arranges and sings his songs. He debuted in 2019 with the singles Borghese in borghese, La vita veramente, and Una sera.

Later the same year, his first album, La vita veramente, was released with the record label Maciste Dischi — a member of PMI, the Italian Independent Producers — and won the Targa Tenco prize for the ‘debut albums’ category.

Fulminacci is an all-round artist: he studied acting and this comes to light in his music videos, which are always original, intelligent and engaging.

In 2021 he took part to the 71st edition of the Sanremo Music Festival with his song Santa Marinella, after which he published his second album, Tante Care Cose.

A quick chat with the artist

The concert in Morrovalle is part of Fulminacci’s summer tour, which represents the first chance to play his latest album live, and the first series of performances in front of an audience after lockdown. Hence, the level of adrenaline was presumably high for both Filippo and everyone who came to listen to him. For sure, when I talked to him right after the concert, the joy of the moment was palpable.

My first request was to know how he would introduce himself to an international public who doesn’t know him. I suggested he picked a representative song and he said Borghese in borghese, since it is the first single he published, serving as his calling card in Italy too. He joked about the fact that its text is really dense and full of words, which implies that understanding it could be quite a challenge. However, we both agreed that his song would certainly be appreciated by the foreign public.

With regards to his musical genre, it is difficult to force him into labels due to his versatility. He surely prefers pop over indie, which is kind of a general term. In this respect, he commented: “I don’t really know what indie means, while pop is a big compliment to me.”

Thinking about an international stage to make his debut outside Italy, I asked him whether he dreams to perform at the Eurovision: “If they want me, I’ll go, of course. I would say yes, immediately.” He gave me this answer in a playful manner, most likely implying that missing an opportunity like that would be utterly silly, given the worldwide visibility it can bestow — and especially after seeing what happened to Måneskin this year.

Another question was about writing lyrics in English. His reply left the doors open: “Well, you do need a certain command of the language, but I think I could definitely give it a good try. When I wrote some of my songs I actually played with a sort of made-up English. So, I would like to be able to do it, but I’m aware that, at least for the moment, I can truly express myself better in my mother tongue.”

In different interviews, Fulminacci stated that he loves artists such as Daniele Silvestri, Jovanotti, other Italian songwriters from the 1970s and 1980s, but also foreign musicians such as The Beatles. So I asked him to choose an international artist he would like to work with: “This is a tough question, but I want to exaggerate and I opt for Elton John. I would choose Paul McCartney, too. I love him madly.”

The emotion of live performances

Lastly, I asked him to tell me something about his return to live concerts since, as I mentioned earlier, the emotion was tangible. In the end, music is mainly made to connect with people, and being able to do so in person is completely different from doing it virtually. Filippo was enthusiastic: “Tonight has been incredible. The public was insane, on fire from the very beginning, and this is crucial for me: if people partake and give me so much, I automatically respond with the same verve. This exchange is essential and wonderful, and I am happy to be able to live this whenever I am on a stage. We started the tour in Bolzano, we have even been to Stromboli, and we played on a sailing boat in the middle of the sea. We have already done quite a few tour dates and we will keep going around Italy. We have also planned concerts for this winter, so we won’t stop.”

What can I say? Filippo definitely deserves to reach more and more people with his authentic and not obvious music which speaks to different generations. And we all deserve to keep enjoying live concerts like this.

If you are interested in the Morro Festival, Enrico Nigiotti will be the next one on the stage. If you want to listen to Fulminacci, you can buy your tickets for his next dates around Italy.