If Italian Americans are badly portrayed as stereotypes, what would be a better portrayal of the culture and identity and people who claim it? 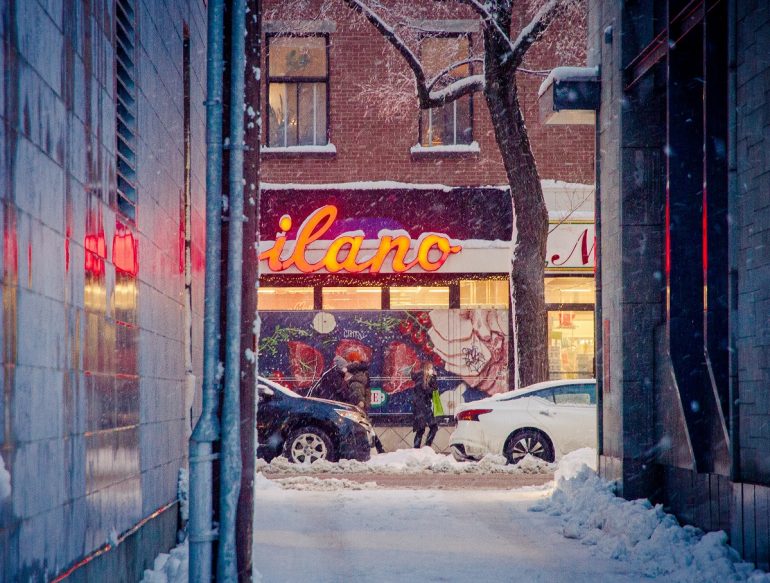 Streets of an Italian area in Montreal, Canada. Photo: Frederick Wallace on Unsplash.

In an earlier piece I revealed that I was relieved that Italian Americans have for the most part taken a pass on participating in identity politics, at least in my biased and entirely unscientific observation of the matter. It got me to thinking, however, that if Italian Americans are badly portrayed as stereotypes and caricatures or just as bizarre inventions of ‘Italians’, what would be a better portrayal of the culture and identity and people who claim it? What, in other words, is an Italian, American or otherwise? What do they do? How are they? What are they like?

I haven’t the foggiest idea. My impulse is to start with artichokes, but what does that mean and where do I go from there? Are they . . . the Colosseum? Rome more generally? The Vatican? The Renaissance? Florence? Milan? Eggplant? Wine? The salt flats of Trapani? The multigenerational family around the dining table? I vicoli di Napoli? Brooklyn? Leather jackets? Espresso, gelato, cappuccino? Dare I say pizza? A South Korean media outlet just got slapped for representing Italy that way in their 2020 Olympic Games coverage. How about strudel? I love strudel. Especially the kind that you get in Trentino. Why not that? You see how ridiculous this becomes.

So if it is not all or any of those material signifiers, then what could it be? Let’s say I am an actor and I am charged with the task of playing an ‘Italian’, or at least that is one descriptor of my character, a parameter or characteristic of his nature and being, something that is supposed to come through clearly on screen as an important feature of his personage, for the sake of plot development. I will spare you the litany of nonsense that I went through above. Certainly something in my appearance would be essential, but that ignores the fact that Italians and certainly Italian Americans can vary quite a bit in their appearance. The way I dress? Nothing stands out in particular but I am pretty sure I could pick an Italian American out in a line up with better than even odds, based on facial features alone. I could also distinguish the Italian from the Spaniard from the French and from the Greek pretty successfully. So at least as far as physical type, the director of casting should not have too hard of a time. So there is something there.

But . . . values? Motivation? Predictability? Likability? Generosity? Kindness? Ferocity? Timidity? Intelligence? Not a clue. Italians and Italian Americans run the gamut, just like everyone else in every other group does.

That just does not feel very satisfying though. Joey Tribbiani on Friends is an Italian or Italian American and we all know what that means, or we know it when we see it. The Mexican, the Canadian, the Japanese, the you name it are all in the same boat — they are all stock characters in contemporary drama, at least to some extent, just as the Soldier and the Courtesan were in Ancient Greek drama, or Columbina and Pulcinella in la Commedia dell’Arte, or the Fool in Shakespeare. The problem we have is that in the contemporary nexus between art and society, or representation and reality, in which we live, the dramatic persona maps too closely onto the sociological person, so we feel the need and the justification to squawk a little bit about cultural appropriation, ethnic misrepresentation, racism, sexism, ageism, or whatever it is. Apparently, people over the age of 50 fall in love and have sex, but nobody wants to see that on TV, or if it does appear, it has to be presented as a problem or played for laughs, or at least that is where film and television artistry is these days.

So I guess you can have an Italian or Italian American doctor, lawyer or nurse, or a construction worker or police officer who is a paisan, but you would have to show their italianità, their paisanity, in some stock way, in how they look, how they talk, and what they eat. Actually, the cop should be Irish and let’s make the accountant Jewish so we don’t have to work so hard. Let’s just slip into the stock characters and not confuse everyone by trying to do anything different.

Remember Michael Mancini, the doctor on Melrose Place? He was An Italian American and was portrayed by an Italian American, the actor Thomas Calabro, or at least I assume italianity in both cases based on physical appearance and surname. But that’s it. I don’t know Thomas Calabro, so I cannot say anything about how he identifies in relation to his ethnicity or identity more generally. But I cannot remember there being anything particularly Italian, or even identifiably Italian, about Dr Mancini other than his last name. So if there was ever a scene where he was standing next to the open door of his refrigerator in which he picks a slice of salami off of a plate and puts it in his mouth while muttering his lines, I missed it.

Here was a presumably Italian or Italian American character who was portrayed in a non stereotypical way — who did not speak with a Brooklyn accent, who was not a plumber, who was not always chasing women, who was not constantly thinking about and talking about food, who never got overly excited about inconsequential things. Satisfied? I’m not. As a character, he was a complete bore. Give me Joey T any day.

So I don’t know where that leaves us. Even Italians play the L’Italiano from time to time, and I would say that they play the Italian even when they don’t know it, or at least do not do it deliberately, just as I indisputably and ineluctably play the American and Italian American as an integral or superficial part of who I am. I think it is Wendell Berry who said something along the lines of “your brain is working best when it stops working” or something like that. I think that is where I am on this topic.