After bringing home the Euro 2020 trophy, Roberto Mancini will now lead the Azzurri to the Qatar 2022 World Cup. The aim, of course, is to win. 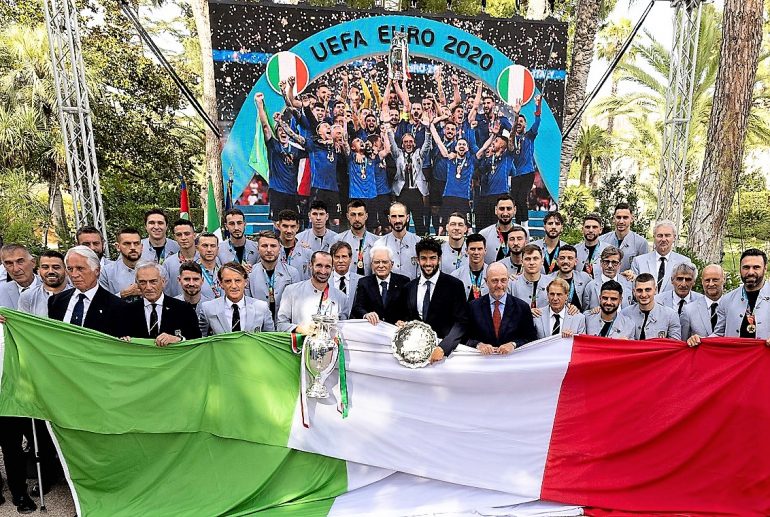 After bringing home the Euro 2020 trophy, the Italian manager Roberto Mancini will now lead the Azzurri to the Qatar 2022 World Cup. The aim, of course, is to win.

When Roberto Mancini took charge of the Italian national football team three years ago, he found one of the gloomiest scenarios in the whole history of Italian soccer. Sweden had just shattered the Azzurri‘s dream to play in the 2018 World Cup, something that hadn’t happen for 60 years. Although for many this signaled a crisis in Italian sport, Mancini had different ideas. His aim? To take Italy back to the top of Europe and the world.

That’s one then to cross off the list. The Nazionale won the European cup after a thrilling and dramatic penalty shootout against England. And Roberto Mancini deserves credit for the achievement. After all, he eventually adapted his tactical and strategic vision to his athletes, who played their best soccer. That’s how a great manager works: he draws out the best from the players at his disposal.

Mancini’s skills undoubtedly represented a significant asset in the competition. A deep and direct relationship with the players brings respect but also a positive environment in the squad. Besides, Roberto is aware that teamwork always beats individual excellence — particularly if a capable manager knows how to make players work together. These qualities will be a valuable upside for the Italian squad into the 2022 World Cup and beyond.

Although Mancini cleared up the rubble by building a rock-solid team, there is no doubt that there are excellent individuals on the field. These players, although not superstars, have plenty of room for further development.

For example, Nicolò Barella, 23 years of age and midfielder playing for Internazionale, has been a sturdy player, shining with an incredible goal against Belgium. Another prospect worth highlighting is Federico Chiesa, the same age as Barella and winger for Juventus. He began the European Cup keeping a low profile until becoming one of the top players in the final games. Lastly, Leonardo Spinazzola, a left wing-back from Roma, was doubtless the best Italian player in the first games, until he broke his Achilles tendon against Belgium.

Of course, when we talk about the bright talents of the Italian soccer Olympus, we shouldn’t overlook Gianluigi Donnarumma. At only 22, the goalkeeper from Milan shined against England, saving two consecutive penalties and thus sealing the Italy’s Euro 2020 triumph. His value has shot up to 80-90 million euros.

Apart from these players — now, at least — the others are not exactly well-known superstars. However, Roberto Mancini managed to forge a solid group in which everyone felt important, but not essential. Shaping good team dynamics in long, exhausting tournaments is critical to success. No player complained about being on the pitch for a short time. On the contrary, Mancini found every player humble and ready to get down to business. And every athlete found himself warmly supporting the others. In this respect, a tight-knit team will be a significant asset for the next 2022 World Cup.

Italy against all the odds

According to the Stats Perform artificial intelligence model, Italy had a 7.6% chance of winning the Euro 2020 competition. Not that much, considering that the Azzurri eventually came out on top. Although the model clearly couldn’t have seen the future, it did draw a realistic scenario: Italy was far from the favorites, due to its lack of superstars and composition of groups in the first rounds.

Qualities and circumstances go further than sheer math and statistics — particularly in soccer. Group dynamics, a team spirit, and belief are all beyond any conceivable A.I. model. And that’s how Roberto Mancini won the title. He didn’t need resounding players — just the time to forge a rock-solid team from square one. He got into his players’ minds, adapting his tactical views to them and vice versa.

But the World Cup is something different. There are fearful competitors like Argentina and Brazil, all looking to make their people proud again. Germany, France, Spain, and England will try to get their own back and get as much from their opposition as they can.

In this sense, only by being humble, not underestimating any opponent, and trusting Mancini’s process can Italy win the 2022 World Cup. This way, they could be able to win back-to-back championships, which would appear a historic achievement. Until then, let’s celebrate the winning.