Police Brutality Is Not Just An Anomaly

Recent episodes of police brutality in Italy have highlighted once more a regressive policing system. Something needs to change. 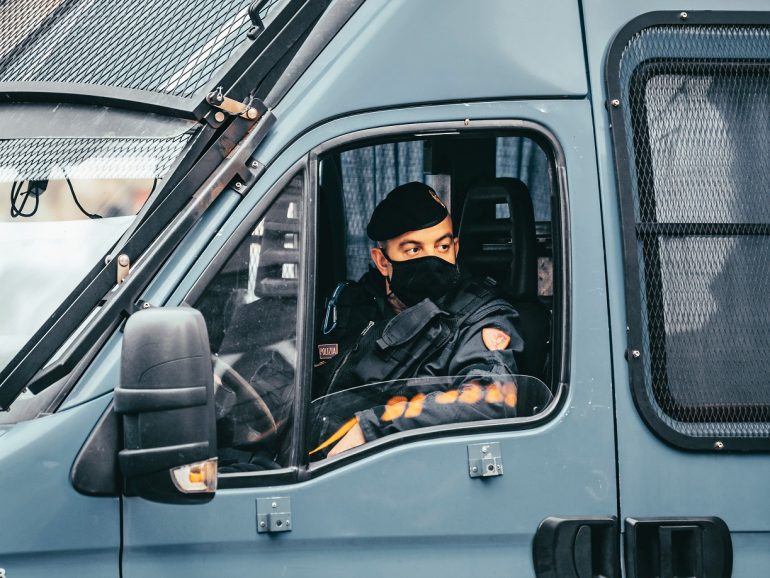 A policeman in Milan, Italy. Photo: Mikita Yo on Unsplash.

Police brutality has been a problem for too long — a problem that reveals the radically cumbersome nature of Italian institutions. According to Amnesty International, this specific type of police violence occurs when the police act in violation of human rights, in cases of racial abuse, excessive force in instances of riot control, and torture perpetrated by agents. In particular, the police’s unlawful use of force may well clash with the utmost obligation of state authorities to respect and protect the right to life.

Today, there is a growing awareness of police power and its role in the society. Events such as the murder of George Floyd, and campaigns such as that to ‘defund the police’, have turned global attention to these abuses. Yet, Italy has a problem with institutional violence that is all its own.

Survival is a difficult task

This month, the newspaper Domani published footage of inside the prison of Santa Maria Capua Vetere, in the province of Caserta, Campania. The surveillance video from 2020 showed the beating of inmates, revealing to the world the critical condition of prisoners and the extreme gravity of police brutality. The violence appears to have been a sort of revenge after a protest in which detainees requested facemasks and COVID tests. Yet, the exaltation of violence, the kneeled prisoners, and the cruelty of the guards make for difficult watching, particularly in the knowledge that this was covered up for a long time.

This specific event of police brutality has led to the suspension of 52 guards and other institutional figures. It was also condemned by the large majority of the public opinion, including Italian judicial authorities. And good riddance. The surveillance video clearly shows indiscriminate use of physical and moral violence, while recordings of phone conversations between guards are explicit about the events. For example, according to the prosecutor, an extraordinary search might have wounded an inmate and might have led to his death.

The real problem, though, is that what happened in the prison of Santa Maria Capua Vetere is by no means an isolated case. Turin in 2017, San Gimognano in 2018, Monza in 2019, Palermo in January 2020. Milan, Pavia and Melfi in March 2020 – these are only the most recent prosecutions of penitentiary police for the crime of torture. These occasions represent the tip of a much bigger iceberg of systemic police failure. The duty to respect and protect was shadowed, brutally silencing those who tried to stand up for their rights and survive in jail.

The sensitive reality of these problems is reinforced by the 20-year anniversary of the violent episodes during the G8 in Genoa in July 2001. This was the so-called ‘Mexican butchery’ that took place at the Armando Diaz school, where many protestors were staying the night, alongside the violence perpetrated at the Bolzaneto military base and the death of the 23-year-old Carlo Giuliani.

What happened at Diaz was later to be considered mass torture and the effects of these brutalities induced a revision process in Italian law. But it took until 2017 for a law against torture to be introduced in the Italian penal code, law number 110 that regulates the crimes of torture and incitement to torture.

This law was the final point of a very long series of parliamentary discussions and reflected the numerous demands of international and European organizations. Yet, immediately after the G8 scandal, the issue entered national debate, emphasizing a gap in national legislation. In 2015, the European Court of Human Rights (ECtHR) condemned the conduct of the law enforcement agencies involved and the failure of the Italian State to properly prosecute and punish those responsible.

The European Union is a signatory to an international legal framework that Italy should supposedly respect. The backbone for the prosecution against the crime of torture is the Convention adopted by the United Nations’ General Assembly in 1984. It illustrates what torture means, legally, and outlines what adopting states should do to deal properly with these crimes.

Even if Italy is among the signatories, the ratification of the Convention in the national legal system received a number of critiques in the domestic scene. Firstly, the vagueness of Italy’s definition of torture, which moves away from its international description, left too many gaps. Secondly, there was no mention of the demand to reform the system connected to the statute of limitations, as requested by the ECtHR. Finally, to tackle the feeling of impunity among some police agents, the ECtHR proposed that individual identification codes should be present on every officer. The last proposal, in particular, has been strongly opposed to the point that the government has shelved it.

However, when instances of police brutality do occur, they end up on the front pages of every national newspaper — and rightly so. Obviously, generalizing that most or even many police forces are violent and adopt torture practices is a big mistake. But there is clear evidence, considering also the recent cases of brutality, that the system needs to be reformed and restructured.

We can start with retraining police forces in nonviolence, for example, while working to rehabilitate and readmit prisoners in society. Moreover, the conditions inside Italian prisons — which are inadequate for both detainees and guards — should be improved. According to data, there are over 53,000 detainees across the country, registering an overcrowding rate of 106.2%. An improvement in facilities alongside a greater confidence in modern prison policies based on notions of trust and responsibility may pave the way to a new penitentiary model based on the re-educational function of the justice system.

As former director of the Office of Prisoners at the Department of Prison Administration, Sebastiano Ardita, has said, detainees are too often considered as people who need to be removed from society. This way, their living conditions and abuse is too often accepted. Yet, the reality of police brutality shows that this persistent mentality needs to be challenged. It sounds obvious, but the detainee must be considered a person with human rights. Ultimately, the right to life must prevail over the right to use the force.