Italy’s tiny, sun-soaked island is known today as a luxurious getaway, but it once was the home of a famed and contentious Roman emperor. 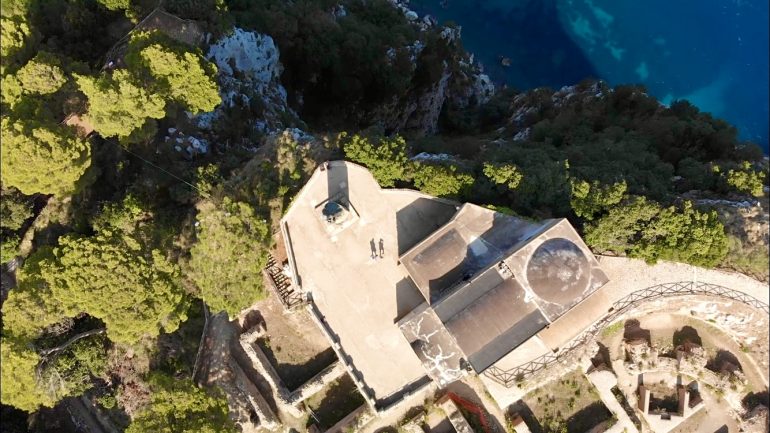 Nestled in the Tyrrhenian Sea of Italy’s stunning Amalfi coast, Capri is just a short ferry ride from nearby seaside cities including Naples and Sorrento. Its relatively easy access and jaw-dropping cliffside vistas make it highly desirable to both locals and tourists alike. Today you will find waiters in crisp bowties serving aperol spritz to A-listers and designer clothing stores that tauntingly line Via Camerelle. The surrounding sea boasts the idyllic Grotta Azzurra and gently carries its waters onto pebbly beaches around the island’s base. Despite its present-day reputation of being the ultimate vacation hot spot, Capri’s history is intertwined with scandal and intrigue.

The island’s first tourists were the Romans who were struck with awe at its beauty and solitude; and Capri lured in some of the most well-known Roman aristocrats of the time, including emperor Tiberius Caesar. As the tales of most ancient emperors go, Tiberius’ life was surrounded by scandal and abuse of power. He was Rome’s second emperor, coming to power in 14 AD after the death of his predecessor (and step-father), Augustus.

The circumstances of the empire’s rule being passed to Tiberius, however, were suspicious. He was not Augustus’ first choice, but the emperor’s biological heir who had been prestigiously groomed for the throne had died in mysterious ways. Some myths point the finger to Tiberius’ mother and Augustus’ wife — perhaps paving the way for her son to be the rightful (or wrongful?) heir to the imperial throne.

While Tiberius excelled as a soldier in his earlier days, he was proven to be a poor politician. He became increasingly absent from running and maintaining the Roman Empire, often leaving important duties to other powerful men in the senate. He eventually self-exiled himself to the island of Capri, partly to avoid assassination, and this is where he would stay for the remainder of his life.

Today, history buffs and adventure seekers can make the trek up towards the ruins that once created the colossal Villa Jovis. Perched on a cliff’s edge from one of Capri’s highest northeastern points, this centuries-old compound was constructed to ensure both privacy and security for Tiberius. The Roman villa spanned an area of over 5,500 square meters with organized sections for various baths, cisterns, underground passageways, and of course, servant corridors to meet Tiberius’ every need. And according to legend, there is an infamous ‘Tiberius’ Leap’ located over a daunting cliff’s edge where unwelcomed guests and disobedient servants would be hurled to their death.

Even though Capri in Roman times still beckoned many to sunbathe on its beaches and indulge in the finest cuisine, not all educated leisure was with goodwill. According to Tiberius’ biographer, Suetonius, Tiberius engaged in wild hedonism with Villa Jovis being the center of it all. Profane decorations and practices are said to have swarmed the compound as Tiberius continued to indulge in excess. Many have argued these accusations, though, as Suetonius did not write the biography until some 80 years after Tiberius’ death. These historians have questioned it as nothing more than sensationalized gossip, and for all we really know, Tiberius could have been a recluse that moved to Capri merely to stargaze and indulge in the sea.

We may never know the true extent of Tiberius’ personal deviances, but this image has remained an intriguing feature of Capri’s history and reputation. It has shaped and inspired many novels and films of the recent era, depicting both the scandal and beauty of the island.

As in ancient times, Villa Jovis is still only accessible by foot. Be prepared for an uphill battle of unending steps, but revel in the fact that you will make the same trek that prestigious Romans once did to get to this solidified and heavily guarded villa. Starting from the central Piazzetta in Capri, follow the signs along Via Longano, Via Sopramonte, and finally Via Tiberio to immerse yourself in the perfectly crumbling walls and overgrown gardens along the way. Villa Jovis begs you to admire its beauty, but also questions you to ponder its tumultuous past.