Is Graffiti Always A Crime?

Seeing vandalism over owned property is increasingly common in Rome. This has brought back the debate over a million-dollar question: can artistic expression override the law? 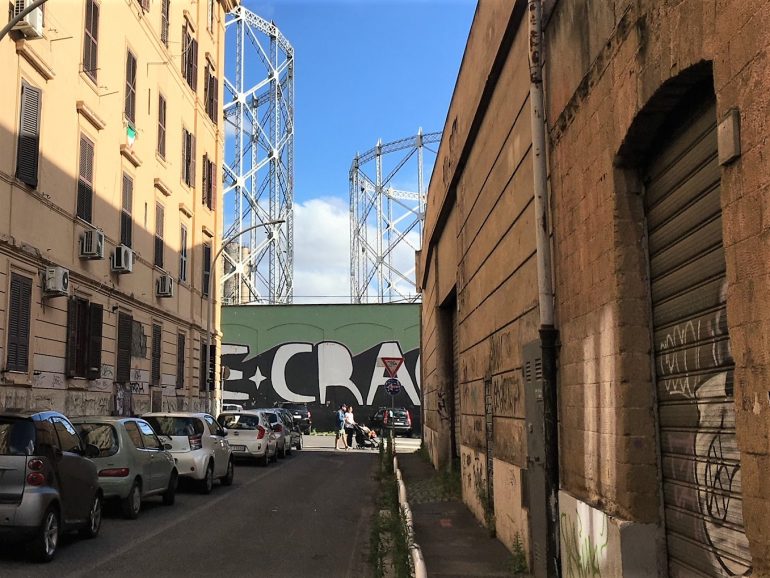 Graffiti in the streets of Testaccio, Rome. Photo: Riccardo Venturi.

In Rome, an abandoned building’s faded-yellow and cracked walls lost its function and aesthetic, the dual purpose that once served its reason for establishment. While it no longer operated for the public, a graffiti artist brought it back to life. Geco, a street artist from Rome dubbed as Italy’s Banksy, had painted each panel of the wall with blocks of white letters over a black background. The symmetry fell into its place, writing the message ‘Geco ti mette le ali’, which translates to ‘Geco gives you wings’, but his advocacy dwindled as the police force in Rome, led by the city mayor, arrested the artist after a year long investigation. The reason? Vandalism over owned property. The incident has brought back the debate over a million-dollar question: is graffiti always a crime?

Graffiti is renowned to be writings on the wall or other surfaces, often without permission. Once permission fails to be granted to the graffiti artist, authorities consider such acts as vandalism, which is a punishable crime. To verify the illegality of street art, Sophie Glover, a senior lawyer, wrote for Legal Vision on the legal guide for the creatives in the sphere of street art: “Graffiti developed from acts of rebellion and artistic expression and is more commonly known as tagging. Tagging is an act of ownership, whereby people write their name or handle in public. Street art, on the other hand, is not about ownership, but rather about sharing concepts and starting conversations. Without authority from the property owner, street art may be illegal. Therefore, to legally create street art, you should obtain permission from the owner of a building. If you fail to seek approval, the property owner or local council may remove or paint over your art.”

Going back to Geco’s case, he had left his name in blocky letters around Roman subway stations and bridges, abandoned buildings and schools, parks, galleries, street signs, lamp posts, and news stands for years before he got arrested. In an article written by Elisabetta Povoledo for the New York Times, she included the public post of Virginia Raggi, Rome’s Mayor, on her social media about the incident, quoting: “He has soiled hundreds of walls and buildings in Rome and other European cities, which had to be cleaned using public funds.” Along with the caption, she posted a photo of spray paint cans, stickers, and other mediums of graffiti the artist would use in his creative pursuits on the streets of Rome, based on what the investigators had found and said to the Mayor.

The monuments, landmarks, and even respected art pieces around the capital city of Italy have undergone spray paints and block letters from taggers, the label attached to graffiti artists as they ‘tag’ the properties with their identity. These occurrences have caused a continuous battle between the authorities and the creative criminals, not only with the aftermath of the designs over the surfaces and the costly clean-ups, but also with tracking and catching them to hold them responsible for their actions. Since the creative criminals snake through the patrols, vandalism has haunted the city of Rome.

In the Heritage Daily’s report, Pincio park, the viewpoint in Villa Borghese overlooking Piazza del Popolo, is a primary target of the art crime where marble statues of famous Italians are defaced with graffiti, or suffer brutal attacks as their noses and other body parts are knocked off with hammers. “Despite six-men-strong patrol squads, on the go 24/7, tens of thousands of euros worth of damage were inflicted on statues and busts across this supposedly peaceful pocket of green,” the article continues. “It’s not only Pincio that suffers at the hands of the vandals. The Trevi Fountain has experienced its fair share of damage, when red dye was thrown into its clear waters. Another serious offence was a direct anti-Pope assault vandalizing the Holy steps, Scala Sancta — one of the most significant places of pilgrimage in the world. A further act of vandalism occurred in 2011 when a man attacked one of the 19th century Moor statues in Piazza Navona with a rock, causing huge damage. Thankfully, the pieces were recovered and they were later repaired.”

The incidents of vandalism persist. As The Local compiles the news reports on the topic: a 17-year-old Bulgarian was charged with aggravated damage to a historical building after carving a letter ‘M’, the first letter of her name, into a wall of the Colosseum; an Israeli tourist was charged the same after she carved initial into a pillar of the monument; a 47-year-old Indian tourist attempted to remove an entire brick from the monument’s wall to take home as a souvenir; two Brazilian tourists injured themselves after they attempted to break into the Colosseum at night; and one Russian tourist was fined with €20,000 after carving a giant ‘K’ into one of the pillars. A 2016 Italian bill states that defacing or damaging cultural heritage or landscapes may lead to a maximum of five years’ imprisonment.

Can artistic expression override the law? While opinions are divided — mainly groups of artists versus the affected — the practice is condemned when historic monuments, artefacts, and infrastructure receive the dots and jets of spray paints and cans. In an article of Antonio & Brunella Barbati Minischetti for La Gazzetta Italiana, they wrote that “the line between art and vandalism, lawlessness and charm is very thin. The goal of every graffiti artist is to achieve some fame in the graffiti scene, making sure that the name is well visible and clear to everyone — in fact, the very first graffiti were just signatures and names. In addition to fame, graffiti brings another element: personal expression, which seems to be the core reason that graffiti exists to begin with.

In the end, the graffiti issue has no easy solution, some people try to defend expression and art, others try to defend historic areas and buildings. Reality is that it is not even possible to bust those who intentionally damage priceless historic beauties as they act mostly at nighttime and quickly. Graffiti: Art or crime? There is no definitive answer yet. From a legal perspective, so long as the artist gains no permission from the owner of the property, graffiti entails a punishable crime.