Italian Blues: Is The Beautiful Language On The Brink?

It might be time to panic about the Italian language, as mother tongue speakers continue to dwindle every year. Is there a solution out there? 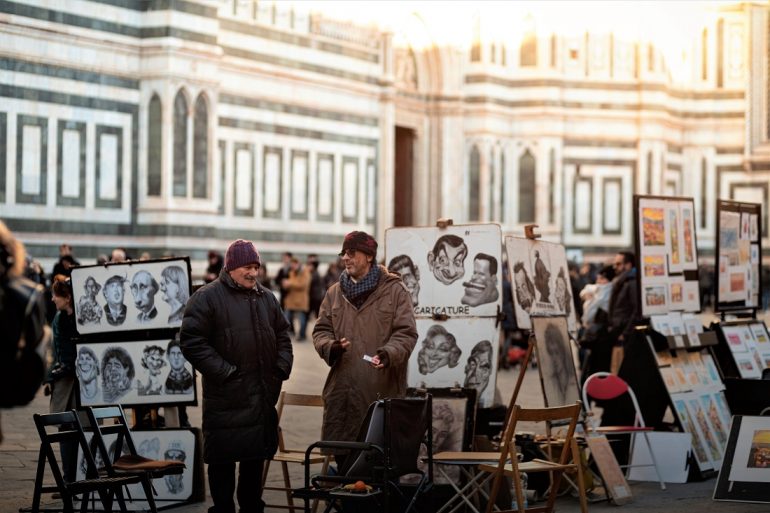 Two caricaturists talk to each other in Florence, Italy. Photo: Samuele Giglio on Unsplash.

Italy consistently ranks among the top ten most visited countries in the world, with more than 60 million tourists per year. There is no end to foreigners expressing their delight over the culinary and artistic wonders of Italy, and the consumeristic lust for Italian luxury goods rages on unabated. If one were to focus solely on the Italian brand, things might seem more robust than ever. But when it comes to the actual language that is the foundation of all these national riches, the situation is less exciting. Italian is spoken by its native population of 60 million, and beyond them perhaps by 6 to 10 million others around the world. Comparatively, the Romance languages of Spanish and French are respectively spoken by more than 570 million and 270 million individuals.

The number of Italian speakers is not increasing by any significant measure; in fact, it is dropping rapidly in certain areas. For example, Italian had the dubious distinction of being the fastest dying language in the United States in 2018, with the number of Americans speaking Italian within the home falling from 900,000 to 550,000 between 2001 and 2017. This 38% crash is largely due to an rapidly aging immigrant population, and the decline is only expected to accelerate as more Baby Boomers pass on. Equally worrying is the state of Italian study opportunities. Across the American education system, Italian language programs are on the decline. Only 20% of K-12 students study a foreign language, and Italian makes up less than 1% of this number. Within the world of American universities, Italian departments can now be found at only 6% of institutions, and dwindling enrollments show no sign of rebounding.

With these grim statistics at our fingertips, is there any long-term hope for the language of Dante and Calvino, and what can the Italian government do to help?

Gianna Nannini, the Tuscan pop star known for songs like Fotoromanza and Bello e impossibile, stressed the importance of preserving the language last year at the World Protection Forum. As she said, “It is absolutely critical that we revalue and promote the Italian language, and this means singing in Italian. This is important because Italian needs to be protected, similar to what has been done in France with the Toubon Law.” The 1994 law made it mandatory for the French government to use the national language in all official government documents and publications, and enacted linguistic guidelines for commercial advertising.

Among Italian politicians, Francesco Lollobrigida has been one of the loudest voices for the preservation of the national language. A member of the Chamber of Deputies from Tivoli, Lollobrigida has lobbied for greater efforts to preserve and promote Italian, claiming that the linguistic anglicization that has been mushrooming since the rise of the Internet will lead to the collapse of Italian. Citing an unnamed study, Lollobrigida stated in 2018 that “this disappearance may occur within the next 80 years.” Whether or not this alarmism has any real basis is uncertain, but Itanglese is certainly omnipresent, ranging from cringeworthy business terms like ‘smart working’ to the unfortunate ‘friendzonare’.

Despite this ongoing encroachment of English, there are some bright spots worth mentioning. The Italian government has been engaged on multiple fronts when it comes to encouraging and celebrating the diffusion of Italian for quite a while now. Beginning in 2001, Italy’s Ministry of Foreign Affairs and International Cooperation, the branch most concerned with promoting Italian language and culture around the globe, has invested heavily in the Settimana della lingua italiana nel mondo. This yearly event held in October always features a different theme, with 2021’s installment titled Dante, l’italiano. Having the partnership of The Accademia della Crusca lends the week a level of intellectuality that has attracted the likes of Roberto Benigni, Umberto Eco, and Sophia Loren.

Another promising initiative is Italiana, an online portal to Italian language and culture that debuted this past March. Developed by the Farnesina, the platform features everything from poetry to graphic art to enotourism, exposing foreigners to both the well known and lesser known delights of the Bel Paese. Inspired by the devastating impact of the COVID-19 pandemic on Italy’s tourism industry, which took a €120 billion hit during 2020, the government has also invested heavily in creatives from all over the country. More than 400 works of art have been produced through the program, and they will be featured on Italiana over the next year. There are major events planned to coincide with the 700th anniversary of the death of Dante Alighieri, which will hopefully make 2021 a blockbuster year for the Italian cultural outlook.

All of us can play a part in keeping the Italian language thriving, whether that means participating in an Italian meetup, supporting cultural events like film screenings, or even reading Italics Magazine. This way we will prevent singer Roberto Vecchioni’s dire prediction — “Italian, in a short time, will be the most beautiful of the dead languages” — from ever coming true.