Vittoria! Notes From The Newsroom After Italy Wins The Euro 2020

Our writers reflect on what it means for football, and for the country, to bring the trophy home. 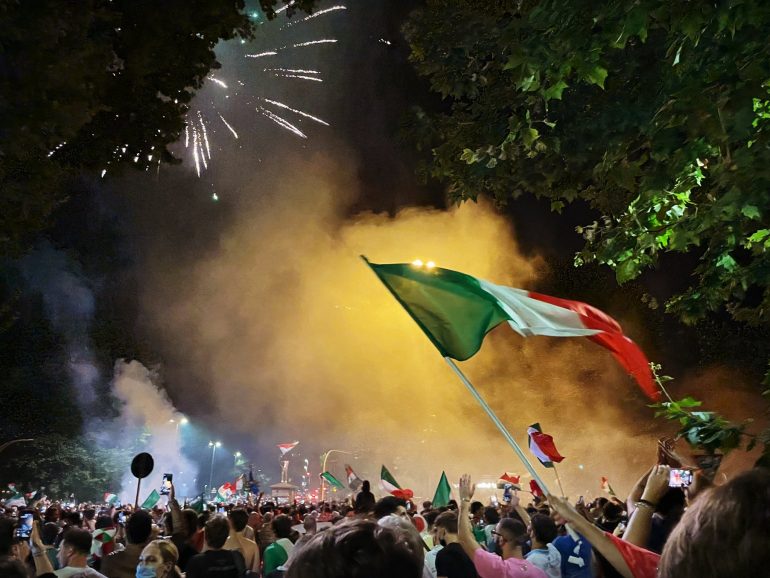 Every play will be broken down into minutiae, and every gesture will be analyzed for days and years to come. But whether you’re a football fan or not, last night’s victory of the Italian squad against England in the Euro 2020 Cup Final was a stunning and collective thrill that captured the entire country. As towns and cities around Italy erupted into spontaneous parades and celebrations, one couldn’t help but feel that we were reveling in something more than what had occurred on the pitch: for the first time in what felt like a very long time, we were united by joy instead of mourning, by triumph rather than loss. We needed it.

We watched along with the rest of the country as those nerve-wracking penalty shots were defended by the impossibly stoic Donnarumma, and we reveled in celebrations with family and friends all over the country. Now, as the glow of the notte magica still flickers around us, we reflect on what it means to see Italy win.

It would be too easy to focus on the disrespectful gesture of English politicians and the press celebrating their victory prematurely. It would be easy to take offense from the English fans booing the Italian anthem at Wembley. It would be too easy to make it political and think about Italians living in the UK who have suffered all manner of abuse after Brexit. It would be too easy to laugh at Boris, his hundreds of English flags in Downing Street, and that impossibly slim margin that put both him and his diabolical plans into motion. It would be too easy to mockingly note that people should wait for the result of the match before tattooing the Cup on their skin. But nothing about this sport is easy, and neither should our takeaway be. Instead, we saw a hard-fought match with its own parallels to real life. It was not easy for Sancho, Rashford, and Saka, proud opponents of a great team. For the Danish fans in Wembley, whose path was both human and admirable. It is not easy, but that’s why we love it. And that’s why it feels so good to watch it come home.

I watched the game from the beating heart of South Italy, and I inevitably succumbed to every superstitious ritual I could remember. And I really believed I was helping my national team to win. Of course, it’s crazy, but if you think about it this victory is nothing more than the triumph of Italian superstition against English self-confidence. The belief that “I always watch the game with the same people, in the same place, otherwise it brings bad luck” has a lot more power than “It’s coming home.” It’s certainly easy to say that “fortune favors the brave,” but perhaps fortune is not so blind. While Italy celebrated, maybe the English overconfidence of believing they had already won was ultimately their undoing. But I was a little too busy celebrating to think much about it!

Being Italo-Argentinian, I had spent Saturday night staring watching Argentina lift the Copa America until 5am. Sunday morning went by really slowly while I became more and more excited about the European Cup Final. I sat in my apartment watching Berrettini play his first (and any Italian’s) Wimbledon final and by the time it was 8pm, I struggled to choose the perfect place to watch the Azzurri. I decided to join my family in Buonconvento, a small Tuscan village about 30 kilometers away from where I live. The town, generally deserted on hot summer days, was already brimming with energy. Teenagers in blue jerseys were running around the side streets as the crowd slowly gathered in the main square to prepare for the match. The experience of watching the game in a small town was unique and impossible to experience elsewhere, everyone greeting each other and singing together, with long tables arranged around the screen as if at a big family wedding. The tension, which had peaked for the national anthem and kickoff, plummeted with England’s early goal, after which it built back up, only for the village to explode after Bonucci’s goal. The square filled with young and old people singing and jumping, the sky red from smoke flares, and a group of confused German tourists watching the scene with a mix of amusement and disbelief. After Donnarumma’s save in the last penalty, music started blasting from the speakers and fireworks filled the square, as the main street was filled with cars, motorbikes and a Tricolore Ape filled with fans singing and waving flags. At any other time of the year, I might have said this sarcastically, but for those few hours, the little piazza in the flat, foggy walled village of Buonconvento seemed like the most alive place in Italy.

It’s important to look at how the players, staff, and supporters on both sides managed their emotions during the final, because maturity — and immaturity — do not necessarily come with age. The sobbing of Mancini in the arms of his friend and ex-teammate Vialli showed his capacity to bottle up his emotions and lead his squad to victory whereas the sobbing of Saka in the arms of his teammates showed he was perhaps too young to be given the responsibility of the deciding penalty. Today, every English person who loves sport and fair play has to reckon with the racism that emerged from people who managed to keep it all well hidden when things are going well. Had the penalties gone differently, Rashford, Sancho, and Saka would be national heroes today instead of being the victims of racist abuse. Another English headline caught my eye this morning: many women fear the result of Euro 2020 as domestic abuse shoots up by 30% on occasions such as this. It’s a sad outcome for England on many levels, and it really takes away from what they accomplished as a team.

After two difficult years in which many have lost so much and Italy finds itself in deep crisis, it was even more beautiful to see all those people celebrating, the cars lined up, proudly waving the Italian flag. Walking through the streets of Rome last night, I had the impression that the National team had given us that hug that we had waited a year and a half for. It made us feel close again, ready to start once more, and more proud than ever to be Italian!

Well, what can I say? Being a Brit in Italy and rooting dutifully for England meant I was rather outnumbered while watching the game last night. But since the only familiar footy player’s name on both teams was Italian captain Chiellini, I didn’t really care that much who won in the end. I don’t ‘get’ the passion for football, and the zealous obsession that drives fans to behave shamefully in the name of the game is beyond my comprehension. Italy were deservedly European champions and the best team on the night and, while the England team fell apart in the second half after such a great start to the match will remain a mystery, why some players chose to remove their silver medals so rudely after achieving such a wonderful result means I won’t be becoming a crazed footy fan any time soon.

Since the match between Italy and Belgium, our garden has become a pitch of a different sort. It is the preferred gathering place for a group of neighbors who sweat and cheer together while, of course, nibbling and feasting. At the beginning of the final, it was raining in London and, despite the shocking beginning, it didn’t rain on our parade. We’re sorry for little George but #itscomingrome and we couldn’t be happier. And honestly, it would have been a little awkward if England — which is no longer in the European Union — won the European Championship, wouldn’t it?

Being a supporter of the Italian soccer team has been an excellent test for everyone’s cardiac health, as penalty-kick shootouts have been thrilling. I loved how the team played together, grinding to reach a common goal. Being without a superstar made the team play better, as it made them trust each other even more. And I truly loved how players and staff all dedicated the European Cup to all the victims of COVID-19 in Italy. It was a bright spot in contrast to the dark days we have lived through. Thank you, Azzurri.

As a kid in New York, I used to watch baseball with my brother, my father, and my grandfather, long before I knew any of the rules of the game or why they mattered. But I loved to watch them watching: to hear them groan with every error and cheer with every call that went in their favor. I have grown to love a good game, in whatever sport it may be, as much for the talent that it showcases as for the joy that it inspires. Seeing those last seconds of the match last night and knowing that sixty-five million other people watched alongside was one of the most moving experiences I could imagine. Because I know how many families watched together, how many sons and daughters will have memories of hugging their mothers and fathers, and how much it will mean to all of them to hold on to those memories. It is undeniably true that winning doesn’t fix our problems — hell, it doesn’t fix anything at all. But it makes us forget them for a moment, and that moment is precious and worth preserving. It is a state of grace, a flag held high, a collective roar that sounds above the rooftops of a nation. Because football, like life, is a game of inches. And in those inches, there is everything.