The Theorem Of Focaccia 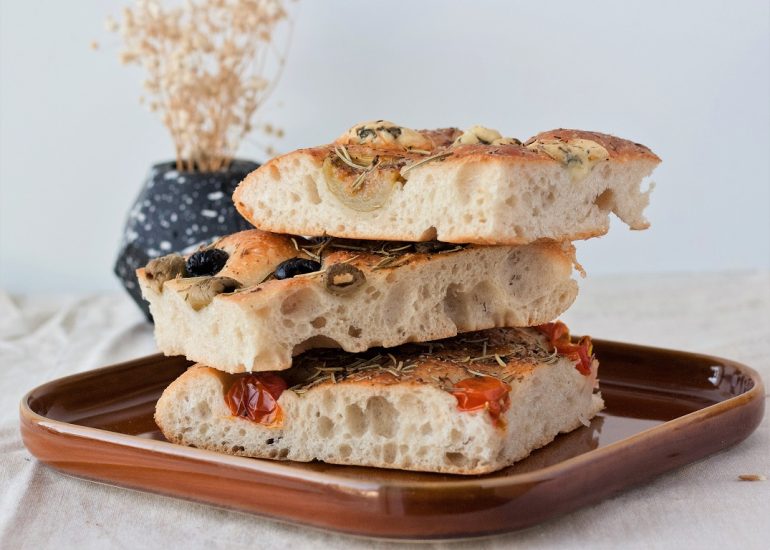 I have been spending a lot of time thinking about focaccia lately. It is one of those things that you can spend a lot of time learning about, and certainly a lot of time learning how to make, so please don’t expect any great insights in this piece, because I am still a novice. What I want to communicate mostly is my affection for it. And what a nice thing to feel affectionate about because it is absolutely delicious. And as far as iconic Italian products, it was among the first that I learned about as a child: focaccia, basilico and pesto, not necessarily in that order and not all together, but as stand alone items, as carriers of meaning, particularly of my Italian (American) identity. I remember being sent to the store to buy basilico and having to ask if the store carried it because I did not know that basil was the same thing. My mother always called it basilico and to this day I say the word ‘basil’ with an uncertain and uneasy feeling.

I put ‘American’ in parentheses in this case because, while one can certainly get focaccia in the Bay Area, especially San Francisco, it is not the same as what you can get in Italy. What makes this statement somewhat problematic is that the focaccia I am referencing in the American context is the kind from Liguria, focaccia genovese, or fügassa, in the local dialect. The focaccia that I will refer to in the Italian setting is focaccia barese, or fecazze or maybe even fcazz in the local vernacular. They are quite different however, despite being similar in concept and basic construction.

Let me take a small detour to get ‘meta’ for a moment. Anyone who wants to understand Italy needs to understand the importance of making distinctions where they probably do not exist within their own culture. So for example when it comes to food, one has to keep in mind that focaccia is not bread just as ricotta is not cheese. There are similarities between the paired items, one pair featuring wheat and the other milk, but what is more important than what makes them similar is what makes them distinct. In the case of focaccia, I would say that it is the method of preparation (kneading, leavening, forming, baking) in general and the abundant use of olive oil in particular that distinguishes focaccia from bread. Different also is the way in which they are consumed and enjoyed. You can eat focaccia at any time of day and at any meal, even by itself. This claim is harder to make when it comes to bread, as basic and essential as it is, particularly with respect to its completeness. Unlike bread, focaccia is considered to be already complete whereas bread typically needs to be paired with something to make it fully palatable. Something similar can be said for the distinction between ricotta and cheese, but I will save that discussion for another time.

I can think of a large handful of revelatory experiences that I have had in Italy and one of them is certainly the time I first had a piece of focaccia in Puglia. It was at the Bari train station, in fact, and I chose the kind that had just tomatoes and not tomatoes and olives because it was quite early in the morning and black olives would have been a little too strong for me at that hour. It cost two euro and it was still warm from the oven, nicely saturated with olive oil and with the tomatoes softened from the oven while the focaccia itself was perfectly brown and crispy outside and moist and chewy on the inside. (Vegetarians and vegans please note; if you are going to visit or live in Italy, you should probably make it Puglia over any other region because of their excellence with vegetables).

I have never been to Genova, or Liguria for that matter, so I have never tasted the focaccia from that part of Italy. It is similar to focaccia barese but without the heavy toppings. In its most basic form, it is flour, water, malt, yeast, salt and olive oil, so it really can be eaten at any time of day. One particularly favored way to enjoy it is to cut a relatively long and thin slice that you then dunk in a cup of hot milk or cappuccino or caffè latte. This is not something you can do with focaccia barese.

So while the focaccia that I grew up with is the genovese kind, I have never tasted the genuine product, so I have to extrapolate from my Bari experience to approximate in my mind what focaccia genovese is really like. The focaccia that I can get in San Francisco is fine, but like virtually everything that is Italian American, it has evolved into something different if not necessarily inferior to the Italian original, although I have to say that I am likely to find that the latter condition is true in the case of focaccia, if I am to judge from my revelation at Bari Centrale.

My question is not why the American version of focaccia genovese veered away from the original form, but why Italians have been so successful and tenacious in retaining the quality of their culinary traditions. Everything from economic to environmental factors have had their effect in both places, but Italy has been remarkably good at maintaining the integrity of their food traditions and products. Why is that? I think the answer lies more in the realm of religion than of anything more material. There is something essential and sacred about food in Italy that is not present in the American cultural matrix. In Italy, food is very much a part of one’s identity, as is religion, in whatever form that takes, from various valences of Catholicism to a less common but no less pungent anticlericalism. So maybe it is this. Or maybe this brilliant feature of Italian life stands alone and is self sustaining. For some reason, I like that idea, maybe for its truth, for its simplicity, for its fundament.