It may have been smaller and shorter then usual, but this year's Roma Pride was more vocal than ever before. 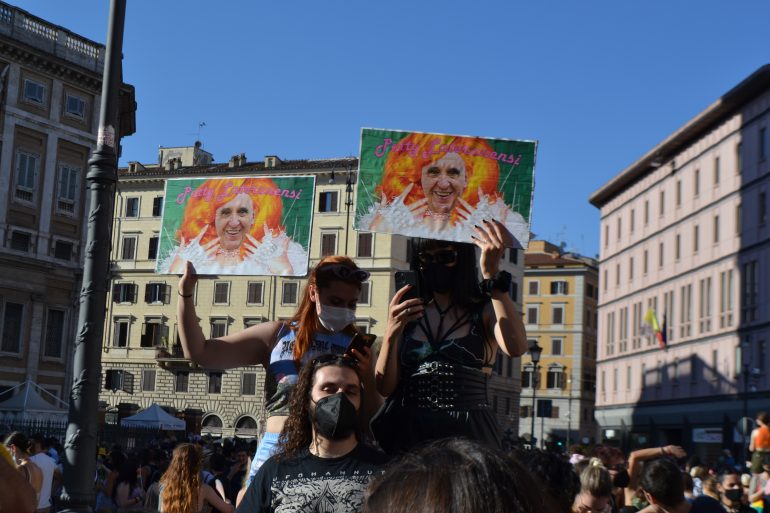 Pope Francis is praised as one of the most liberal popes in the history of the Catholic Church. Yet, the Church cannot bless same sex unions, the Vatican reiterated earlier this year. Photo: Lidija Pisker

On the last Saturday of June, Rome was as colorful, smiley and beautiful as it can be. Not only because it was a warm summer day, but because Roma Pride, the annual LGBTIQ+ pride march, was back on the streets.

Roma Pride is one of many LGBTIQ+ Pride events held each year in cities across Italy. It’s taken place in the Italian capital since 1994, but last year’s Pride fell victim, like so much else, to COVID-19.

Its 2021 edition was uncertain up until about a month ago, when the organizers announced it would take place on June 26. The news delighted activists. But as the epidemiological measures were in conflict with the organizers’ goal of fostering inclusiveness, further information was communicated to the public less then a week before the event.

As a result, the limited number of participants necessarily made the ‘everyone is welcome’ event impossible, as the organizers noted on the Roma Pride Facebook page. For several days, it was unclear if the event would even be held at all, let alone where exactly will it take place. Luckily enough, the obligation to limit the places in the march was dismissed but the route was much shorter compared to previous years. And, sadly, no trucks and dancers — symbols of Pride festivals in years gone by — were allowed.

Many Italians expressed their disappointment on social media, saying these shortcomings disrupted their plans, making it impossible to come to Rome to support the Pride. Nevertheless, rivers of people dressed in rainbow colors attended the event.

Without party trucks, loud music and extravagant dancers, the Pride seemed to be less of a party and more of a protest. That’s by no means a completely bad thing. It was a protest that is much needed, as only a couple of days previously, the Catholic Church made yet another move against the Italian LGBTIQ+ community.

The lack of enforcement of LGBTIQ+ rights in Italy has been heavily influenced by the Catholic Church. The country, for example, adopted a law on same-sex civil unions only six years ago, being the last Western European country to do so.

Vatican’s latest attempt to interfere in Italy’s business is its protest against the so-called ‘DDL Zan’. The draft law (DDL is an acronym for ‘disegno di legge’, meaning ‘draft law’ in Italian) against transphobia and homophobia, named after Alessandro Zan — the politician and activist who proposed it — prohibits discrimination on the basis of sexual orientation and gender identity.

The law has polarized Italy, with right-wing parties blocking its passage through parliament since 2018 when it was proposed. But the Vatican’s formal diplomatic protest — arguing that the law would curtail Catholics’ freedom of thought — has recently made the debates across the country even hotter.

But the participants of Roma Pride have made it clear what they think about it: “Vatican, stay away from our underwear and from our fight to freedom and dignity,” one banner read. Many participants held banners that demanded the Church “back off” and that Zan’s legislation be adopted.

Despite strong opposition, Rome’s LGBTIQ+ community seems to be optimistic that the anti-discrimination legislation designed to protect them will soon become reality. With any luck, next year, Roma Pride will celebrate, not wish for, the reality of DDL Zan.