Ode To A Chickpea

Italy needs a national vegetable and I nominate the nutty delight that is the chickpea. 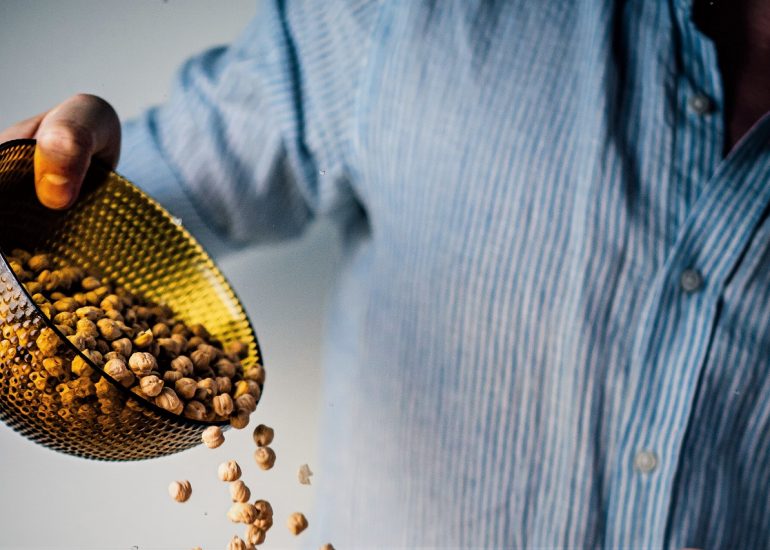 Farinata is a kind of chickpea pancake or frittata that you can find in Genova. You can find something very similar in Palermo, where they are called ‘panelle’. Essentially you are talking about chickpeas that have been dried and ground into flour, which is then mixed with water and salt to form a batter, which is then baked or fried to make a flat, thin, nutty and wholesome slice of deliciousness. Whichever place you are in or whichever form you encounter, you will most likely have it served between the top and bottom of a sliced roll as a kind of sandwich, but they are highly versatile and can be served in a number of ways.

In the case of farinata, there is one very important detail that you must keep in mind should you ever decide to prepare or eat it, and it is this: everything is a lot more fun when it comes in a barrel. It so happens that farinata was born early in the 13th century when Genova defeated Pisa in a naval battle, the two powers being maritime rivals at the time. Upon returning from their victory, the hubristic Genovese let down their guard, and when they ran into tempestuous weather, their ships foundered upon the rocks of their native shores, spilling their cargo upon the beach.

Now, when you are talking about medieval ships, you are talking about barrels, and in this case the barrels were full of, wouldn’t you know it, the ingredients that go into farinata, namely chickpeas and olive oil, with the ocean itself seasoning the mixture with its saltiness. Add anxious sailors who were desperate not to waste the precious contents of their shipment and so spread the mixture on hot rocks to dry it out and preserve it — there is a ‘the Genovese are as stingy as Scotsmen’ joke in here for those of you who are still courageous enough to make it — and you have all of the makings of an undoubtedly apocryphal tale that tells the story of the origins of farinata. Most likely the simple but flawless mixture was invented by the ancient Romans or Greeks, but why tell the truth when making stuff up is much more fun? And as I said earlier, everything is more fun when it comes in barrels: pickles, monkeys, laughs . . . and certainly chickpeas.

My reason for telling you all of this? I think Italy needs a national vegetable and I nominate the nutty delight that is the chickpea, cece in Italian. Oh, I know; there are those of you who will want it to be the tomato, others the eggplant, still others the zucchini. And while all of those splendid and delicious vegetables have their charm and legitimacy, I am not sure they could fulfill the national role as well as the cece could. Here is my argument. One, chickpeas can be the basis of a complete meal, which is not something that can be said for the others. Try, for example, substituting the tomato, the eggplant or the zucchini for the cece in the recipe above. It would not work and would not be nearly as toothsome, fortifying and nutritious. Two, witness the Tale of Two Ceces that I recount above: a single recipe has roots in both the far north of Liguria and the deep south of Sicily. Only focaccia holds down similar diplomatic posts — you have to substitute Bari for Palermo, but look at Genova shining as a culinary star. In any case, focaccia is not the same thing because wheat is a cereal and not properly a vegetable, and let’s not get started on the pasta versus polenta versus riso debate; I just don’t have the energy (and in any case, pane beats them all). Third, Italy’s vegetal mascot cannot be onion, garlic, parsley, carrot, potato or any other such vegetable because they are either so ubiquitous as to be indistinct or just not special enough. Fourth, with its origins in the Middle East and Asia, think Turkey, the chickpea, Cicer arietinum, is at its root a resident of the Mediterranean. This cannot be said of all of the other candidates, tomato for example, which is of American origins and, to be honest, a relative newcomer on the Italian scene.

But just as important as historical origins is future promise. Far from being a purity test, the elevation of a legume to such an important position has to take into consideration the diplomatic role that it will play, its adeptness and acumen in going mano a mano in realpolitik. Frankly, I am not sure the aromatics are up to it, especially in their raw state; they are just too pungent. So onion and garlic, parsley and carrot over there in the corner, I am sorry, we will keep you here close to home, but as far as representing our glorious country abroad, I think we need a diplomat of great substance and integrity, as well as someone who can blend in with the others, bump elbows with kindred spirits in high stakes negotiations, and quite frankly be a little bland, a little workaday and humdrum, no one showy. And to those of you who still insist on campaigning for fennel and arugula, even artichoke, all I can do is ask that you vote sensibly and with the wellbeing of the entire country in mind. Garbanzo in Madrid and Hummus and Falafel in the Middle East must be met with a show of dignity and respect, and we know from past failures that subtlety goes a long way.

In case you are not convinced, perhaps an argument made in verse will be more effective, one that pulls on your heartstrings and delights your spirit rather than one that bludgeons you with reason. Consider this stirring piece that I think makes the case well:

Ode to a Chickpea

Round and tawny bumble bee

Hummus in a grounded paste

Yahweh makes it for Al-lah

With falafel, spiced to taste

Packed with fiber and protein

Firm and cute and mighty bean

So good you are to me