Fuksas, The Cloud And The Criticisms

First a convention center and hotel, then a vaccination hub: how has the Cloud by Massimiliano and Doriana Fuksas weathered the criticisms? 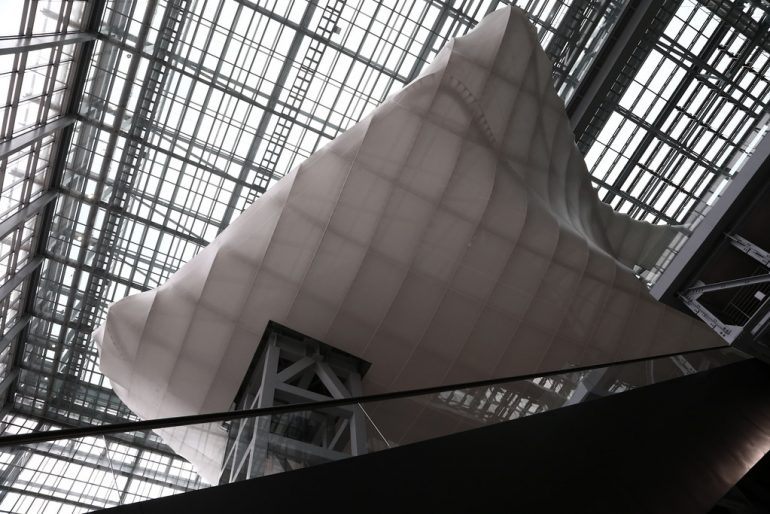 As the nighttime dawns, the dark blue sky in the background underscores the light that the architecture in the foreground elicits. At a first glance, metal beams form a grid shape, affording a view of a floating white installation inside the infrastructure. Overhead lamps blast their white light to further accentuate the hovering shadow of the spaceship-like object enclaved inside the building. Eyes on the map, the district of EUR in Rome, a dubbed business area of Italy’s capital, hosts the Cloud, a convention center and a hotel as helmed by architects Massimiliano and Doriana Fuksas and a construction that brims with controversies, scandals, and corruptions.

Complexity in nature defines the elements and essence of the Cloud. While such a name spearheads the building as its primary title, the architecture divides the space into five sections. The basement, positioned on Viale Cristoforo Colombo, opens its doors to the public via a staircase that leads into the building’s main foyer and information point. Past this area, a large concourse welcomes up to 6,000 people into its congress and exhibition halls. Here, the contrast between light and dark play as the ceiling exposes the black-painted beams, railings, and pipes while the sun filters through the windows above, snakes through the gaps, and reflects on the floor.

The Theca — the outer shell and façade of the convention hall and hotel — amalgamates metal, glass, and reinforced concrete into its structure. Inside the building, 7,800 square meters of space accommodate public and private conferences, exhibitions, and large-scale events. Transparent windows surround the area, an immersion into the hustle of the promising city life integrated into the remnants of nature. Suspended inside the Theca is the Cloud — the interplay between these two spaces symbolizing the connection between the city of Rome and the convention center and hotel.

The Cloud acts as an independent cocoon-like structure that wears 5,000 square meters of advanced membrane fiberglass and flame-retardant silicone. The curving and bending beams of the Theca supports the Cloud, the display of their interconnectedness. It lies at the heart of the complex and guests may access it through the Forum — an artery walkway that fuses the two structures together. Inside the Cloud, five levels — supported by escalators and walkways — lead to the auditorium which can hold up to 1,800 participants. To guarantee that the Cloud system has a heart of its own, the auditorium clambers in wooden cherry panels, red velvet cinema chairs by Poltrona Frau and specially designed by Massimiliano and Doriana Fuksas, and dangling bamboo-like tubes that shoot the light rays upwards to amplify the scenic lighting of the space.

The final architectural concept is the Blade — an autonomous building that splits into 17 floors and contains a new 439-room hotel built to provide accommodation to visitors of the center and the city of Rome. Sprawled across 18,000 square meters, the Blade also includes 7 boutique suites, a spa, and a restaurant.

The foundation of the colossal architecture centers around 37,000 tons of steel and 58,000 meters of glass, masking over both the exterior and interior designs, and its fully earthquake-proof structure that can withstand small and large seismic waves through the insulators installed with a horizontal rigidity, which works against the movements of small earthquakes while their low rigidity wards off large oscillations with low accelerations during more violent tremors. In an interview with Metropolis Magazine, as Guglielmo Mattioli writes, Massimiliano comments that “the problem was to solve the confrontation between a shape that is completely free like a sculpture — the Cloud — and its more regular envelope — the glass box. The building has two sets of inspirations: the rigid geometry of the EUR on one side and then the baroque Rome, the organic Rome, and the Rome of Borromini. I wanted to put all these Romes close together and see what happens.”

Although the EUR Convention Center, the Cloud’s official title, weaves into the fabric of state-of-the-art designs, ergonomic attitude towards sustainability through its promise of a high-energy performance with low energy consumption, and an upscale way to invite tourists and locals into its nook, the architecture has faced controversies that still endures today. After its opening in October 2016, the convention and hotel has generated a total cost of €353 million plus decades of delays in-between. Massimiliano and Doriana Fuksas conceived the plan in 1998 and experienced 5 different city mayors and three temporary commissioners while attempting to realize the blueprint.

Critics barked at the purposelessness of the architecture, stating that it cost more than what it was worth, but the architects dismissed the argument by highlighting that the resulting price decreased than the initial estimates. To continue the Metropolis Magazine’s write-up, the public company that owns and handles the center and hotel said that EUR Convention Center expected to generate €300 million to €400 million a year through congresses, events, and tourism, but hotel developers are yet to show their interest in collaborating with the hotel side of the infrastructure and doubts have been cast as to how the center plans to invite such a number of visitors per year. In terms of its designs, Massimiliano Fuksas takes pride in having kept the original design, eliminating any changes which fail to respond and adapt to the present needs of the environment, society, and economy. This way, the aesthetic sits at the forefront and conceals the dirt under its favorable look.

Turning to the present situation, the pandemic halted the business operations of the convention center and hotel to transform the space into a vaccination hub. In an interview with Linda Varlese for Huffington Post, Massimiliano Fuksas said he was not surprised at all that the convention center would become a household name and space for the vaccination campaign in Rome, considering how flexible and expansive the halls and rooms are to cater to the needs of the global crisis. “The Cloud is used for many purposes. It is COVID that has discovered the Cloud, after all. Before COVID, it was a place for Opera which welcomed baroque music and dance, and now it will be a place that will provide health services for all. In fact, the lower part, which ranges for about 10,000 square meters, may be divided into many parts and turned into a large space. Then there is the hall on the upper floor, another multi-purpose space of five thousand square meters.”

The transition towards a vaccination hub means postponing congresses, exhibits, and events in the EUR Convention Center, affecting the flow of revenues it is supposed to garner. In Desirée Maida article for ArtTribune, she wrote that Roma Convention Group, the company which manages the convention center, estimated a loss of 4 million euros in 2020, but sees light at the end of the tunnel as it shifts back to its opening with a lineup of events starting 2022 on a regular basis.

With modernism in design and limberness in purpose and space to reawaken the glory of a city, EUR Convention Center aims to soar high as a new staple into EUR’s dwelling amidst scandals and controversies surrounding its conception. While waiting for the influx of tourism and true opening, the Cloud glows in white light to power the business district’s up-and-coming trail.