Vincerò Brings Hope For Opera Fans Across The World 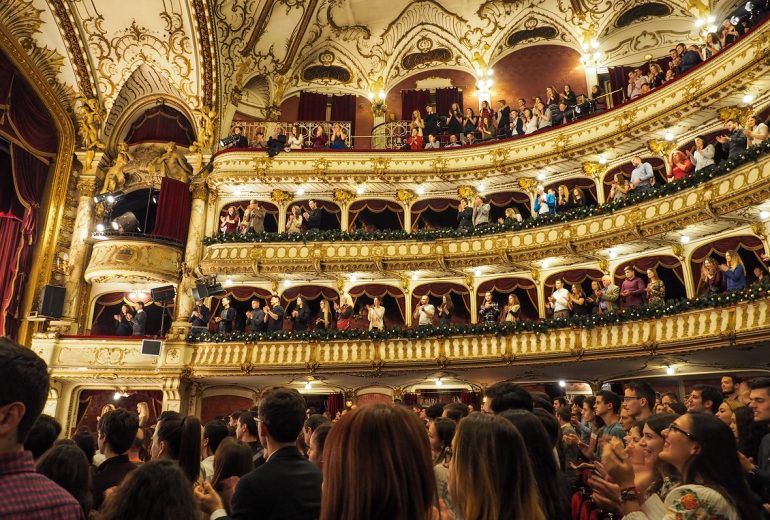 A theater in Cluj-Napoca, Romania. Photo: Vlah Dumitru on Unsplash.

The last eighteen months have been a dark time for culture. Thanks to the pandemic, performing arts organizations, associations, and opera companies across the whole world were forced to cancel the entirety of their 2020-21 seasons. That’s meant that performing artists — from opera singers to technical personnel, costumists, scenographers and all who work behind the curtains, all apparently ‘non-essential’ — have been forced to stop activities for a longer period than ever before. And longer than they could ever have imagined.

However, a sign of hope comes from Italy for opera singers — and fans — from all over the world. More specifically, it comes from the city of Naples, the once great capital of opera. With the support of the Italian Ministry of Culture and the Comune of Naples, Euro Artists Management, an association with a commitment to the international diffusion of music, is launching the very first Italian international opera singing competition: Vincerò. And all opera fans should get excited.

The competition will select singers from five continents, with the aim of spreading musical culture and discovering new singing talents. Vincerò means ‘I will win’, the famous phrase from the aria, Nessun dorma, in Giacomo Puccini’s opera Turandot. It’s a name that expresses strength, courage, and hope, at a moment of darkness and desperation.

“The Vincerò World Singing Competition will be a great challenge not just the contestants, but for ourselves as well,” Angelo Taddeo, director and main organizer of the competition, has said. “Italy is the homeland of opera, an art that we have exported all over the world. But until now we had never had such a vast competition worthy of our great musical history. Winning will give equal opportunity to new opera talents, beyond geographical, political, cultural, economic and religious divides.”

Over the years, Euro Artists Management has dedicated itself to discovering new talents in opera, by organizing advanced training courses with internationally renowned opera singers, festivals, projects and major events within opera performance.  Its work has enabled it to build a massive multinational network — involving renowned artists such as Luciana Serra, Renato Bruson, Monteserrat Caballè, Katia Ricciarelli, Rajna Kabaiwaska, Josè Carreras, Leo Nucci, Mirella Freni, Jonas Kaufmann, and Piotr Beczala — empowering it to create possibilities and opportunities for a younger generation of opera singers. Now, these singers are coming from distant countries to Italy, where they will arrive with the hope of becoming artists who can leave their mark on the future of international opera.

After two international selections, the finalists at Vincerò will face a jury of excellence formed by artistic directors, superintendents, and casting directors from the world’s major opera houses, including Milan’s Teatro alla Scala, the New York Metropolitan Opera House, the Salzburg Festival, the Royal Opera House in London, the Bolshoi Theater in Moscow, and many more. As one of the jury members, Peter De Caluwe, Artistic and General Director of La Monnaie Theatre of Brussels, has said, “let’s put it this way: the jury members are theater agents that sign the contracts. That is not to be underestimated.”

And there’s another thing not to be underestimated. The jury will consist of some of opera’s most feared critics: writers for international music magazines such as the Italian Connessi all’Opera, the USA’s Opera News, the UK’s Opera, Germany’s Die Welt, and many other music magazines from across Europe.

The opera in Italy

The finals of Vincerò will be held in Naples from 29 to 31 October 2021, in honor of the great tenor, Enrico Caruso, one hundred years after his death. Naples is a fitting place for such an event, thanks to its remarkable role in the development of the operatic style. In fact, perhaps of all cities across the world, it’s Naples that has left the greatest mark on the history of the genre.

The opera was born in Italy. Before coming to Naples, opera was originally born in Florence at the end of 16th century, when a group of poets, musicians and artists gathered at the noble house of Count Giovanni Bardi, a character of the epoch’s ‘avant garde’. These artists decided to try to revive new forms of ancient Greek tragedy — and from their attempts, ultimately, opera was born.

The first serious works were Dafne by Jacopo Peri, as well as his Euridice, the composer’s only manuscript that has survived to this day. Euridice was performed on October 6, 1600 for the first time at the Sala Bianca of the Florence’s Palazzo Pitti. It used the ‘recitatives’ (the style in which opera singers deliver spoken lines) and, more importantly, it included arias for each soloist, a formal innovation that helped develop the performance’s plot and action.

As the great Belgian basso Paul Gerimon, who sang the role of Plutone for the historic 400-year anniversary of Peri’s Euridice at the Pitti Palace in 2000, said: “Baroque opera is the basis for the entire development of the opera genre. Together with Euridice, Euridice by Caccini and Orfeo by Claudio Monterverdi, Baroque opera has become the unmovable foundation of opera until today.”

Yep, perhaps the greatest operatic development occurred in Naples. After performances in Florence and Venice in the early 17th century, magnificent opera theatres were soon built in Rome and Naples, and later throughout Europe. They became symbols of prestige for the cities, as well as a crucial coordinate for business affairs, deals and other social events. These were not spaces just for the rich, but for lower ranking people as well.

This was important for the true turning point in the history of opera, the performance of Serva padrona, composed by 23-year-old Giovanni Battista Pergolesi in Naples in 1733. Pergolesi’s work would become known as the first example of opera buffa, a more secular, ‘earthy’ artistic form, depicting scenes not from the myths of gods and epic heroes, but from the lives of ordinary people. Serva padrona even used local dialects, rather than Italian, so audiences could notice their own resemblance to the characters.

This way, the serious opera, originally for kings and nobles, became a comic opera for a more ‘normal’ audience, with more common problems. That’s what made this style incredibly popular very quickly, and inspired the best intellectual minds of the epoch.

We can say that Naples inaugurated a real revolution in the history of opera, in the methods of composition, and in the musical approach of all upcoming composers. The opera buffa would ultimately find its highest expression in the operas by Mozart, who, after Alessandro Scarlatti, Handel and Gluck, made the greatest musical innovations in the form. However, it all started in Naples, the first true capital of opera.

Vincerò brings opera back to Naples

Thanks to the Vincerò World Singing Competition, Naples will be at the center of the history of this musical form once more. A form that is unique and incredibly rich, beautiful and complex. A genre that is a true Italian treasure, that now belongs to the entire world.

As superintendant of Milan’s Teatro della Scala and president of the Vincerò jury, Dominique Meyer, has said, “Vincerò will look for singers who can be ambassadors of beauty and music, who are capable of creating the emotions we love so much in opera.” After such a difficult pandemic year, these emotions — and the beauties of opera and music — are exactly what all of us need.

Registration for the competition, reserved for singers born between 1985 and 2003, is now closed. All information and registration methods are available on the Vincerò website.