When Planning A Bridge Is No Small Decision

Why a bridge over the Strait of Messina is such a dilemma for Italian lawmakers and of little pressing interest to Italians. 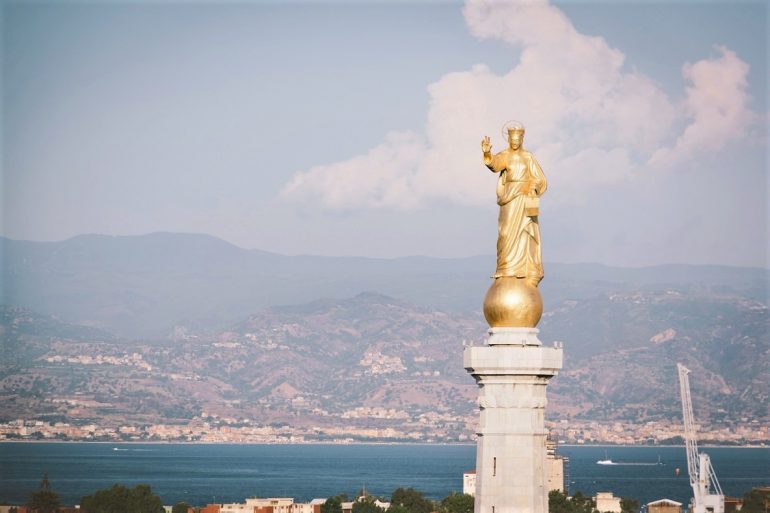 A view of the Strait of Messina. Photo: Tomas Eidsvold on Unsplash.

When planning a bridge is no small decision it can lead to a decision never being taken. In a recent podcast, the journalist Giuseppe Colombo informed us that the dream of connecting the two Italian coasts of Calabria and Sicily, divided by the Strait of Messina, has allured people for 2,000 years. Pliny the Elder, philosopher and Roman military leader born in 23 AD spoke of a plan to bridge the Strait with a series of connecting boats. The idea was abandoned as it was clear that more traffic ploughed the Strait in a north-south than east-west direction, so any structure on water could not be permanent. Since then, Italian politicians regularly dangle the prospect of a suspension bridge or, depending on the engineering firm in vogue, a tunnel, as one of their election campaign carrots and these companies are paid handsomely for their projects. Projects that, however, are just as regularly put on hold.

Real obstacles in planning this bridge

The Akashi-Kaikyo Bridge, spanning the Akashi Strait, connects the Japanese city of Kobe and Awaji Island. It is the world’s longest suspension bridge, with its central span measuring 1,991 meters. It’s made up of six lanes with a combined length of 3,911 meters. One example among many. The Strait of Messina, by comparison, is 3 kilometers wide at its narrowest point at the northern end so, in engineering terms, a suspension bridge is feasible.

However, there are major difficulties: sismic risk, surface currents, environmental impact, political feuding, opposition and fear among local communities that a bridge would lead to the demise of ferry transport income for the cities of Villa San Giovanni, Reggio Calabria and Messina — a sizeable chunk of their economy.

Constant risk from earthquakes and currents

The Strait is one of the most seismically active areas in the Mediterranean. The complex African-European tectonic plates, the presence of overwater (Stromboli, Etna) and underwater (Marsili) volanoes are responbible for the almost constant tremors that people in the area live with. These are constantly monitored, and Etna in particular makes its presence felt periodically. In the 19th century, folklore abounded with tales of epic seismic events. Among them the 1783 series of Calabrian earthquakes that killed an estimated 30,000 people.

Then, on the night of December 28, 1908 reality hit home when an earthquake of 7.1 Mw destroyed the three towns mentioned above. It was followed ten minutes later by a tsunami with 12-meter high waves that sent buildings and people crashing into the sea. The damage was completed by landslides and spontaneous fires. The death toll from all the events of that one night in 1908 was estimated at between 75,000 and 82,000, 70% of which was in Messina, on the Sicilian side. It is classified as the most destructive earthquake ever to hit Europe. Reconstruction was slow and the public enthusiasm for Mussolini’s Fascist Party in Sicily in 1929 was, in part, due to the Party’s promise of immediate intervention in public works.

As if the sismic risk wasn’t enough, the Strait of Messina is subject to strong surface currents that have always been known as a danger to navigation. Add to these the deep, tidal currents that create a unique marine ecosystem. This latter, according to experts, would be inevitably and irrevocably altered and the consequences are not clear. A natural whirlpool and underwater current in the narrowest portion of the Strait is particularly treacherous and has been linked to the Greek legend of the immortal monsters Scylla and Charybdis described in Homer’s Odyssey. These coincide with the modern-day Scilla and with the hypothetic location of Cariddi.

No Ponte (No Bridge) started as a local grassroots project against the construction of the bridge and is now a coordinated national body of associations and individuals who maintain that the impact on the environment in an area with the highest biodiversity in the Mediterranean where 12 Natura 2000 sites are located and protected by European Law under the Habitats and Birds Directive. The allure of the bridge, rather than its practicality, makes many people forget that all aspects of the proposal need careful consideration. The movement of millions of cubic metres of land, silt and shale would upset the marine balance of the Strait and could cause the depletion of fish stocks, thus putting the livelihoods of a large sector of the local population that relies heavily on fishing at risk. Furthermore, the groups argue, the road and railway traffic benefits, in monetary or time terms, could never recoup the investment of billions of euro without considering the millions already spent. These groups propose using such funds for major investment in railway, road and ferry infrastructure to limit waiting and reduce crossing times between the two coasts.

Up until the end of the 19th century, large shipping vessels from Sicily to the Italian mainland mainly sailed between Palermo and Naples or Salerno, partly because of the risks in crossing the Strait to Calabria and the inexistence of road or rail networks once there. The first ferry service between the Calabrian and the Sicilian coasts was in 1896, planned by the engineer Antonino Calabretta.  The ferment caused by the start of construction of the Golden Gate in San Francisco in 1933 incited Calabretta to present his project that same year for the construction of a bridge between Punta Faro in Sicily and Punta Pezzo in Calabria. The project was approved but the outbreak of the Second World War in 1939 put construction on hold.

And this was to become the pattern for the Bridge over the Strait right up to the present day. Politicians are well aware that planning this particular bridge is, indeed, no small decision. It has been in the background of most debates on the modernization of the Italian mezzogiorno for over fifty years. Millions have been spent and pockets lined with project ideas that are recycled intermittantly during election campaigns. Enquiries and special studies are set up and money is poured into them just to have them often flippantly rejected until the next time. In 2006, the Italian Parliament voted to scrap the bridge project by 272 votes to 234, but in 2008, with the election of a Silvio Berlusconi-led government, the bridge once again became a top priority. In 2012, an Italian comedian and self-styled politician, Beppe Grillo, literally swam the Strait to prove that the bridge was not necessary. People then said he actually proved the opposite.

For those who love acyronyms, TEN-T (The Trans-European Transprt Network) is also trotted out as a reason for building the bridge. Or for not building it. It would make Sicily a more integral part of the network of EU roads, railways, airports, water and telecommunications in constant evolution. In 2020, Giuseppe Conte shyly alluded to the possibility of studying the feasability of a bridge and it has been hinted that part of the Recovery Fund might be invested in this massive project. An EU condition, however, makes this hypothesis a non-starter. The project must be completed by 2026. Not very likely with the bridge’s track record.

The cities directly involved in planning the bridge

For readers wanting a clearer picture of Calabria, you may like to have a look back at an article on the topic posted some time back.

For travelers approaching from the north, the first crossing point to Sicily is from Villa San Giovanni, a railway, road and sea terminal town that grew up around the spin-off activities connected to a transport hub. In 1908, it was a town of about 7,000 inhabitiants, 10% of whom perished in the earthquake. Reggio Calabria is the final destination of the toe on the main north-south motorway and railway lines. Ferries regularly connect Reggio with Messina in Sicily.

For all the benefits that the bridge would bring, it would seem that the populations of these three cities are as divided on the matter as the Italian Parliament was in 2006. But they are mostly indifferent. Talk about building a bridge is precisely that — just talk — and it gets nobody excited. It has been going on for so long that the older citizens in Messina can remember hearing as children that “”they’re going to build a bridge and the ‘Continent’ will be connected to us.”  The Continent then needed its prosperous neighbor, Sicily, more than vice-versa. Whether or not that has changed today is for another discussion.