The Sicilian musician has overcome his visual impairment and, in the process, made his dreams into a reality. 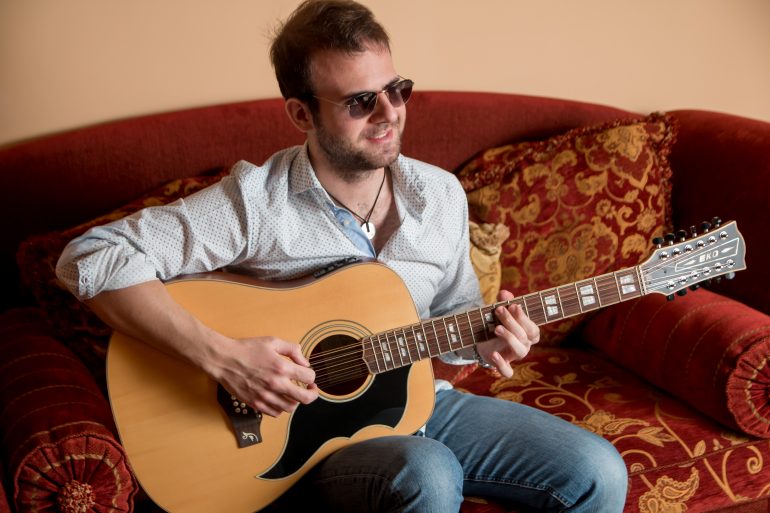 Most of us don’t remember the first thing our parents gave us, and even fewer can truly say that it set the direction for our lives. But Michele Romeo is not most people, and the guitar his parents gave him when he was 4 years old is still the foundation of the musician he’s become.

Music was always the driving force for Romeo, who grew up in the small town of Mazara del Vallo in Sicily. By the age of 10 he was formally studying guitar, eventually enrolling at the Centro Formazione Musicale in Palermo. By all accounts, he was a prodigious child who was well on his way to becoming a prolific musician.

However, along the way his path took a grievous detour that would change him forever. At the age of 13 Romeo was diagnosed with a rare ocular disease that began to rob him of his vision. He experienced a rapid and progressive impairment and, by the age of 18, he was completely blind. Most people would be discouraged by this kind of unforeseen event, wallowing in their misfortune. But Michele Romeo is not most people.

Instead, he forged ahead with his musical career and embraced his condition as a newfound perspective rather than a limitation. He composed his first song during a 2008 hospitalization in Rome, and appropriately titled it Medical Center. He went on to produce his own album in 2012, gaining critical acclaim in Sicily. Not content to stop there, he moved to Milan to study English and Spanish, graduating just in time to make his first TV appearance, where he performed and discussed the spiritual and physical transformation that guided his career.

But he was not done yet. Michele Romeo had always dreamed of living in the United States and dedicating his life to music, and in 2016 his dreams were realized when he moved to Boston to attend the prestigious Berklee College in Boston. His education consisted of courses specifically designed to teach blind students how to use musical recording and notation software such as Pro Tools and Sibelius. Now comfortably settled in Boston, he is currently working on his next album and on other artists’ projects.

Michele is the living embodiment of tenacity, and his story is a reminder that no matter what difficulties that life puts in our path, if we dedicate ourselves to our goals and believe in our ability, there is always a way to achieve them. I spoke with Michele about these goals as well as both the difficulties and triumphs he has experienced.

How has your condition changed your relationship to music? Do you think it’s become stronger?

However, as a musician, I have benefited from it. My ears opened up. Before coming to Boston, I had no idea how to record my music. I had to depend on other people to do it, which was very frustrating. At Berklee, however, through the Assistive Lab Technology directed by Prof. Chi Kim, I learned how to use music software on my own. Having the opportunity to connect with a professor who is also blind and being introduced to entirely new paths, was incredibly important. I was also inspired in many other ways, especially in those aspects of the private life of a visually impaired person.

Being able to learn from someone who also had to battle the same condition made me feel stronger and more motivated. If he made it, I can make it too.

At Berklee, you attended courses specifically designed to teach music technologies to the visually impaired. You said that these courses are not a reality in Italy. Could you find a reason for this?

Well, as I mentioned, the Assistive Lab technology changed my life. But I don’t really have an answer as to why you cannot find these opportunities in Italy. Money is obviously a factor, but there also need to be people that can develop a good program. In Italy, no one has ever thought about something like this in the conservatories because they don’t know about the accessibility features that programs like Pro Tools offer. I called four different associations for the blind before going to Berklee to ask if someone could teach me how to record independently, and nobody could help me.

In Italy, I’ve met people recording on their own but they are self-taught, and they didn’t know that Pro Tools, the music industry-standard software, had accessible features. The professor I studied with at Berklee invented software that connects to Pro Tools and improves the accessibility for blind users. There’s a big difference, as you can imagine.

Beyond the resources, it depends on how many people are interested in learning music using this software. The United States is a huge country, and every year at Berklee there are at least 4 new blind students attending the classes I was in. How many blind people are there in Italy who want to learn music professionally? How many music schools or conservatories are there to hire a professor to deal with these things?

Before going to Berklee you also graduated in English and Spanish translation from IULM in Milan. You obviously wanted to expand your skillset, and we could all learn something from your attitude. What would you say to young musicians or people in general who lose faith in their abilities?

You know, there are things that we can choose and things that we cannot. I was 13 when I decided I wanted to come to the US. Before coming here I thought it would be very important to be confident in the language. I graduated and became an interpreter for English and Spanish but my main goal was to become fluent and confident with the two most commonly spoken languages in the United States.

I guess my answer is to pursue what you dream: you really have to want it and you have to be determined. But remember, your path may be filled with obstacles so you have to be strong and do your best not to give up.

You are currently living in Brooklyn, New York, ever closer to your dream of living and working as a professional musician and producer. Do you plan to come back to Italy one day, or has the US become home?

I guess if I had the chance I would love to spend spring and summer in the US and fall and winter in Italy. Right now, I need to stay in the US more to build a solid foundation for my career.

Did you feel a culture shock moving from Italy to the United States?

Not really. I was already fluent in English and Spanish so that helped me a lot. I also felt very welcomed by the people around me. Of course, getting adjusted was a little tough at the beginning, but I cannot complain too much.

It’s been said that the US is a meritocracy. What does that mean in practical terms, and how does it differ from being a musician in Italy?

In my opinion, it is not just a question of meritocracy. In general, there are more opportunities in the US, and it is well-known that Los Angeles and New York are the most important cities in the world for the music industry.

I think that in the US, if you want to work on your own music and you are an artist with a niche market, there is a chance that you can do it for a living. Most of the musicians I know in Italy always have a side job. Don’t get me wrong, there are many people who also have side jobs in the US. However, it is still much more possible to make music your primary source of income in the States.

You have recently graduated from college and worked on your album Fragments. What are your next projects? Will you devote your time entirely to music, or do you have new dreams to chase?

Yes, I graduated last year and I am working on many different things right now. I have collected some ideas I put down during my time at Berklee that will be assembled into an upcoming album entitled Fragments. It’s an appropriate name because there are also a few live recordings that I want to put in there, so it is a real mix.

It is going a little slower than I had planned because I am also working on some other artists’ projects as a music producer and mixing engineer. I’m juggling many things but I’m very happy with what I’m doing.

What would you like people to take away from your story?

The most important thing is that I enjoy what I do! When I was younger I always dreamed of becoming a musician and I wanted to experience life in the United States. After years of studying and work, I accomplished what I set out to do. Now, I am a music producer, I compose and work on my own music as well as other people’s. So the main message I would like people to get from my story is the importance of determination. You have to have the desire to keep going and to refuse to give up, no matter what challenges life presents you.

* The interview has been edited for length and clarity.