The student-led advocacy group is lobbying the European Commission to extend voting rights for EU mobile citizens — and they're winning. 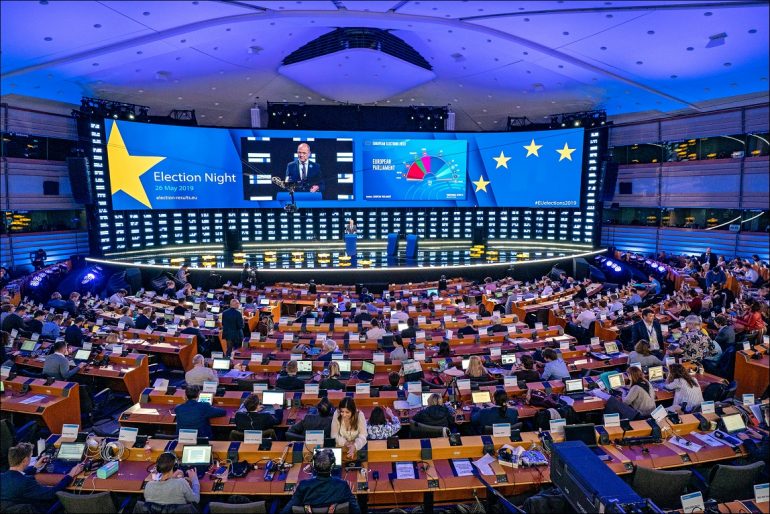 Moving freely within the European Union has many advantages, but it is not without obstacles. In particular, mobile European citizens (those who are citizens of a member state but reside in a different EU country) are not permitted to vote in their country of residence for regional or national elections and referendums happening in their home country. This clear contradiction between democratic citizenship and freedom of movement has inspired a group of students and activists to found Voters Without Borders, a coalition campaigning for full political rights for EU citizens living abroad. Two members, Klaudja Culi and Sofia Profico, who focus on Italy and Belgium, sat down with us to talk about advocacy, strategy, and communication in the EU today.

In January 2020, Voters Without Borders lobbied the European Commission to register the European Citizens Initiative (ECI), a proposed reform to reinforce the existing rights of mobile EU citizens to vote and to stand in municipal and EU elections, yet extend these to regional and national elections and referendums. “We also lobbied to strengthen current rights, such as easier access to information about what citizens are required to vote for and clearer information on the voting registration procedure for all citizens,” Klaudja and Sofia note.

On March 4, the Commission adopted the decision to register ‘Voters Without Borders — full political rights for EU citizens’ onto their docket. Voters Without Borders have now 1 year to collect 1 million signatures in a minimum of seven EU Member States for the EC to consider their request.

Both Italian citizens, Klaudja and Sofia are currently studying abroad in Brussels, Belgium in the so-called ‘EU Bubble’. Their geographical location and interest in international affairs have made them uniquely aware of the benefits as well as the drawbacks of living in another EU country.

The rise of Voters Without Borders

Voters Without Borders was “born from the experience of 14 million Europeans mobile citizens, EU citizens living in another member state,” explains Klaudja. “The main idea was that we are all proud of living in the borderless union that allows people from 27 countries to come together and enjoy a higher standard of democratic rights.” Currently, as the organization highlights in a strategy paper provided to the EC, “citizens are entitled to vote and stand as candidates in municipal elections in any Member State in which they reside and to vote and stand in European Parliamentary elections, in the same way, those nationals of that State can.” However, EU citizenship does not replace national citizenship as it was established by the Maastricht Treaty in 1992.

The freedom to move to and live in another EU member state without a Visa, the so-called ‘freedom of movement’ principle enshrined in Article 45 of the Treaty on the Functioning of the European Union, has widely benefited both the EU and its citizens. According to a 2019 study among EU citizens of working age, 3.3% resided in an EU country other than that of their citizenship: those populations reported a higher employment rate (75.5 %) than those residing in the country of which they were citizens (73.1 %).

However, an EC report found that despite this, a very low number of mobile EU citizens made use of their electoral rights in the 2019 European Parliamentary elections. In the same elections, only 10% of EU citizens voted in their country of residence. Without a higher level of engagement in voting processes both at home and abroad, these populations risk falling through the cracks of a delicate system of citizenship and democratic principles.

Klaudja and Sofia both point out that there is not a single solution to the issue but rather multiple improvements and policy changes that must be implemented. The EU suffers from “the oldest bureaucratic problems: getting information, registration procedures, and administration procedures have led EU mobile citizens becoming discouraged and avoiding taking an active part in the political sphere of the country they are living in.”

Instead, they maintain that all EU countries should provide general voting information in multiple languages. “Citizens can be more aware of their political rights, and we want to facilitate their registration procedure when they move to another country. It should be automatic because sometimes deadlines are often not clear. The administrative process is hard to understand.” Facilitated voting methods can help increase the percentage of EU mobile citizens who use their voting rights and overcome obstacles like language barriers, distance to an embassy, or even digital difficulties for people who cannot, or may not, know how to use online resources, such as older people.

Furthermore, Voters Without Borders wants a help desk made up of a network of national electoral authorities and the EC to “coordinate and share best practices, and remove the obstacles that prevent mobile EU citizens from voting. We consider voting a right and not a privilege. It is very important to make mobile citizens aware of their rights and to make it easier to participate in the politics of the country they reside in as well as their home country.”

A challenge is also about the mindset that an EU mobile citizen has that proper communication could aid. “One of the challenges that we face in our strategy in our advocacy campaign,” explains Sofia, “is that we face low interest of the population to wear voting rights because of the bureaucratic, difficult bureaucratic procedures. People are discouraged, but also uninterested if not informed.”

Klaudja and Sofia explain that ideological background plays a role in this issue. “What if an Italian in Belgium feels like since they live abroad, they do not have the right, nor need, to vote?” It is not a far-fetched question: as of January 2020, nearly three million Italians reside in another European country and the majority have lived abroad for over 10 years. Therefore Italian citizens who are also EU mobile citizens, according to Klaudja and Sofia, may be even more discouraged by the voting process. “We believe that is related to how difficult it is already for people to vote in Italy, which translates when they go abroad,” they explain. “One example is students and workers, except some privileged categories, who cannot vote when moving to the north or to the center of Italy itself.” If it is that much of a challenge to vote at home, why should it be any easier abroad?

In addition, while a recent study found that 52% of Italians believe that being part of the EU had and has its advantages, it is the lowest among all Member States. This fact has not escaped Klaudja and Sofia, who must work not only to secure the rights of Italians abroad but to convince all Italians that this is a battle worth fighting at all. “There could be many reasons for Italians’ euroscepticism, but it certainly does not help understand the importance of European citizenship, and the opportunities one should have when moving abroad. We have received endorsements by several Italian Member of the European Parliament (MEPs) and we hope that this can translate into some further advocacy among other politicians back in Italy.” Getting broad support for the ECI will also require rallying Italian around the thorny subject of EU participation. It’s a tall order.

But it is one for which these budding activists are ready and willing. “Our team is in contact with civil societies and activists, and our hope is that especially the younger community can share our message and our mission because they should be more interested in this kind of problem and in this kind of project. When we talk to them they do not get the importance of voting rights when living abroad. They say, ‘If I am abroad, why should it matter if I vote for elections happening in my home country?’ It matters, and this mentality needs to change. Having voting rights abroad allows you to determine and contribute the future of your home country even if you do not live there anymore.”

Let’s not forget how important democracy is

So how does this issue relate to non-EU citizens, both within the region and more generally? According to Sofia and Klaudja, it’s simple: “it represents the importance of democracy.” And they are right.

Just as you contribute to the country you reside in by paying taxes, similarly you should contribute to political life. Some EU countries still do not permit dual citizenship, and only allow citizens to vote rather than residents as well. Therefore even within the EU, the debate is not as simple as it seems, and there are many more exceptions that need to be included. “In fact, this initiative is about voting rights across borders because it underlines the importance of an EU mobile citizen being able to provide input in both countries.”

Voting provides a chance to bridge the gap between a citizen and its government, and to take part in the choices that affect both. History is too full of examples of what happens when democracy is eroded, and it is easier than we think. The European Union is an example of how peace can come from conflict, but people must be able and encouraged to take part in its decisions and direction. As Sofia and Klaudja note, “EU inclusion is about allowing a citizen to take part in the life of a country, through work, socializing, and yes, politics.”

Voting may be optional, but it is a choice that any citizen should get to make.