The Pandemic Nightmare Of The Italians Stranded In India

An Italian couple traveled to India to meet their adoptive daughter. The pandemic nightmare they found nearly destroyed them. 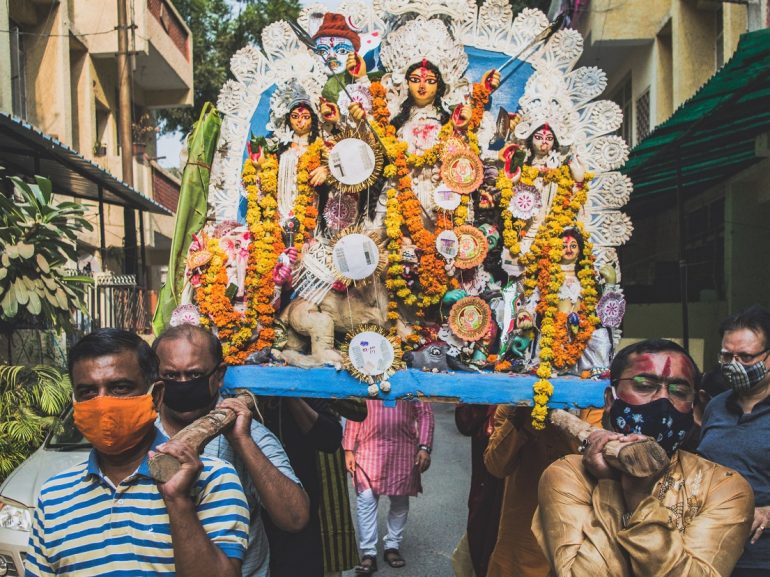 Men bearing a coffin during a funeral in India. Photo: Swarnavo Chakrabarti on Unsplash.

As the world marks 14 months of the COVID-19 pandemic, a new nightmare has arisen in India. Since early April, India’s coronavirus cases have quadrupled, with upwards of 400,000 new diagnoses per day. There have been news reports of a dwindling oxygen supply, thousands of  hastily constructed graves, and bodies burned on the streets.

While this situation is distressing on all accounts, there is a critical connection to Italy that heightened the drama. 70 Italians, in India to adopt orphaned children, became stranded as the medical crisis deteriorated. The group arrived in New Delhi and Mumbai on April 19, filled with excitement about finally meeting their adopted children. Yet as Hindus surged to different sites to celebrate the Kumbh Mela pilgrimage, coronavirus cases began to spike. In response, European nations including Italy moved to restrict flights from India, with Italian Minister of Health Roberto Speranza announcing a new ordinance banning the entrance of travelers who have been there in the last 14 days. While Italians stranded in India were given permission to return home, they could only do so upon receiving a negative COVID test. With testing sites far beyond capacity and the Indian health system in chaos, many of the adoptive parents became desperate for a ticket out of hell.

Simonetta Filippini and her husband Enzo Galli have faced especially challenging circumstances, as Simonetta contracted COVID during the last week of April. While her husband and two-year-old adopted daughter Mariam were placed in a COVID hotel, Simonetta was forced to endure nightmarish circumstances at the Holy Family Hospital in the New Delhi suburb of Okhla. As she recounts, “I was in a 6 foot by 6 foot room with seven people and several died in front of my eyes. People were piled on the ground, there was no room to move.”

While Enzo sat in the hotel room taking care of Mariam and making calls to the Italian Embassy, he witnessed similar scenes of horror. “From the window of the hotel, we see them burning the corpses of COVID victims in the street. It is shocking and we are very worried. We have all been separated, with us in the hotel are couples from all over Italy and also children who need specialized medical care. We have a permit from the Indian government to leave but they are not letting us depart until we have a negative test. This means we will die. Outside there is the smell of death and it is indescribable.”

Vincenzo Starita, vice president of the Rome-based Commission for International Adoptions, moved quickly to coordinate evacuation flights for the 70 couples, and now all have been safely returned to Italy. The unfortunate Filippini-Galli family had to wait several more hand-wringing days before a special flight was chartered on their behalf. A generous network of family and friends came together from across Italy to raise more than €80,000 and organize a Volitalia medical flight to ensure the safety of the couple and their adopted daughter. While initially Simonetta recovered relatively quickly, her health had begun to decline again and thus it had become critical to rush her to an Italian hospital as soon as possible. On May 8, after almost ten days of uncertainty, Simonetta’s flight finally took off from Indira Gandhi International Airport and landed in Pisa. The family’s lawyer, Elena Rondelli, stated that “The flight was delayed, but what is most important is that it landed safely with all three aboard.” Simonetta is now recovering at Careggi Hospital in Florence, while Enzo and little Mariam are in quarantine.

While this tense episode of the India-Italy connection may have ended well, Italian authorities are still concerned about the many Indian laborers who are reentering Italy after several weeks of religious festivities. In 2020, more than 130,000 Indians arrived in Italy via direct or indirect flights, thus Italian authorities are concerned about the difficulty of ensuring these returnees are not positive for COVID. In the small town of Sabaudia, about an hour and a half south of Rome, the primarily Sikh farm laborer community of Bella Farnia Mare has been declared a ‘red zone’, with an outbreak of dozens of cases.

A local resident scoffed at the dismal conditions in the former beach condo neighborhood, saying that “For them, the virus has never existed. They always did whatever they wanted and when I told them to wear the mask and not to gather in large groups, they mocked me. They were convinced that all they needed was turmeric and garlic to protect themselves. Now the results are evident to everyone.”

While Jersey barriers have been set up on the streets leading into Bella Farnia Mare, they are easy to get around, and thus there is no real quarantine among the Indian residents. With the failing of local authorities to really crack down on the movement of the day laborers, it is likely the situation will worsen. This has outraged native Italians, who have been counting on a strong tourist season to rejuvenate their struggling economy. As an anonymous bar customer stressed, “Sabaudia thrives only in the summer and something like this is the last thing we need.” Beyond the health crisis, this little town on the coast of the Tyrrhenian Sea will need to soon find a way to deal with festering ethnic tensions.