Bari And The Comity Of Commerce

My time in Bari was one soul filling and wallet emptying encounter after another. 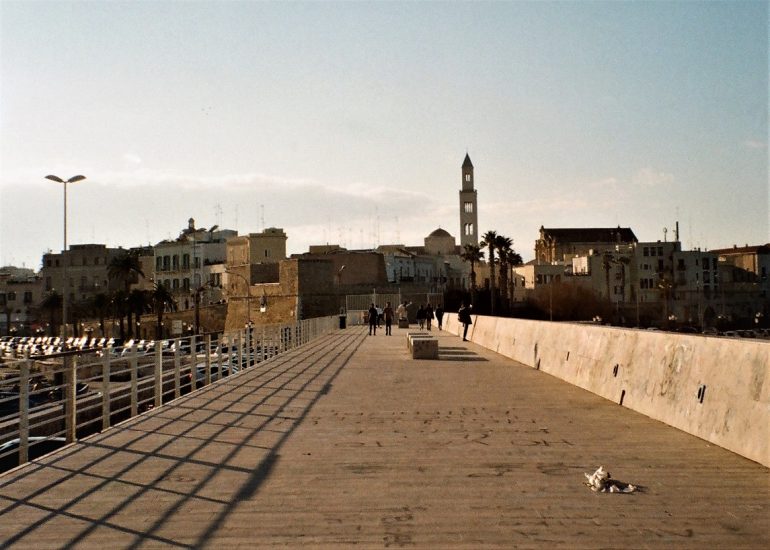 Every so often a phrase will come into my head and I will play with it until it becomes something real, call it a theory in search of a case study, an idea in search of evidence that it does exist as something real and is not just a figment of my imagination. One such phrase, the ‘comity of commerce’ came into my head one day while I was in Haiti, trying to formulate what might be needed to restore that beautiful country to a more functional state following its devastating earthquake in 2010. While I was there I did see evidence that this socio-economic pairing was starting to appear in instantiations here and there — a shoe vendor with his wares spread out beneath a tree, a water seller with a basket of bags balanced atop her head as she worked her route — bursts of activity that appeared like poppies springing up within a field or butterflies flitting over a meadow — as those remarkable people took the first steps toward recovery, reweaving an economy from an ecology that had been torn and scattered by a major event of nature.

For things to return to normal, retail life — shops, vendors, commerce in general — had to be normal because ‘buying things’ is not just about acquiring the items of daily life, it is part and parcel of any community’s shared identity and culture. I suppose if you are a hermit or one half of a lonely elderly couple living in a hut in the Andes, or somehow otherwise completely self sufficient with absolutely no immersion in any kind of business economy, benefit system or relief program, then you have to find your comity — ‘courtesy and considerate behavior toward others’, the dictionary says — elsewhere or in some other form, maybe as you milk your llama or gather your wild walnuts. But in most of the world, most people find it through trade, through commerce, through the daily act of buying and selling in a larger circuit of production and consumption, and not through a more direct engagement with nature.

And so here I was in Bari. I had just spent a long train trip sitting next to a young and charming Moroccan woman whom I had met on the platform while waiting for my train to arrive. She had been openly engaging with one or two others before she moved over to me and struck up a conversation, tilting her opalescent face to one side as she listened intently to whatever I was saying. Apparently she was on her way to Bari to visit her older sister, having been given some time off by her employer, an Italian who had a shop in her country, in a city whose name I can no longer remember. And so we rode and talked and shared photos. Her Italian was worse than mine, which at the time was not great, but we still managed to communicate well enough. It so happened that her sister lived in a suburb outside of Bari. I am sure I could find it on a map and in that way recall its name, but it is probably better that I do not and in any case it does not matter. The sister had been married to an Italian and was now living in this town with her baby. The young woman wanted me to take a bus to their house to meet them. I started to see how I fit into this scenario and decided to wade through it carefully.

The train arrived in Bari and so we gathered our things and descended onto the platform, a new one this time, and after having gotten separated in the crowd, we found each other again and exchanged phone numbers. She was insistent on this. Competing for my attention was Bari itself. It was just before Christmas and the market stalls that lined the streets around the station were bursting with energy. Vendors sold all kinds of things and they were all in their most solicitous mode, and this is a description that I use in the most positive and admiring way. It was my first time in Bari and finding your way in a new city is always a bit difficult — I had an appointment to meet the owner of my lodgings in an hour or so — so I told my new friend that I would be in touch and threw myself into the throng of buyers and sellers that filled the entire journey to the place where I would be staying. The plan was to text the owner as soon as I was in front of the building and then he would come see me. And see me he did, zooming by on his scooter, nattily dressed and bespectacled, possessing that quick intelligence that only southern Italians display, an eager engagement, an ingratiating attention.

I settled in and then went back out into the street to find something to eat as I was very hungry and thirsty and needed not only something for that evening but for the morning as well. Not far away I found a shop that was still open. It was dark and quiet but loaded with good things: cheese, bread, olives, wine, milk, coffee . . . The woman behind the counter asked me what I would like and so I told her. ‘Olives’ apparently meant two big containers of both the black and white varieties (green olives are often called ‘white’ in Italy, just as red wine is sometimes called ‘black’). ‘Cheese’ produced a similar collection of wedges, the more aged one encrusted with straw and the fresher one scooped into the same kind of plastic container used for the olives. ‘Wine’? Two bottles, a light red and a dirty white. ‘Bread?’ One long loaf and a bag full of rolls. She had the most beautiful hair I had ever seen on a woman and I stood transfixed in the dusky light of her little shop as she filled my order. Laden with my purchases, I made my way back to my apartment. The next day or two were the same. A restaurant that specialized in fish also had a take away counter. In the matter of only a few minutes I became the proud owner of €50 worth of all kinds of piscine preparations.

My entire stay in Bari was like this. “Do you want a taxi? I will get you one immediately.” “Do you want to go to the marina? I can also take you there and here and to this other place.” The haircut I had is among my most memorable and enjoyable. Somehow, charm and service combine to form this ‘comity of commerce’ that I had been thinking about and boy did I find it in this magnificent city that throbs like a giant octopus and wraps you in its lovely tentacles. From the young stall worker who expertly and proudly pointed me towards where my apartment was to the woman who worked the focaccia stand at the train station where I departed, my time in Bari was one soul filling and wallet emptying encounter after another — the comity of commerce in the highest manifestation that I have ever encountered.

What about the Moroccan girl and her sister? That story will have to wait for another time.