Italy Is Europe’s Recycling Leader. Can It Do Better?

With 79% of the country's waste now recycled, Italy has become Europe's recycling leader. But is the country doing enough for sustainability? 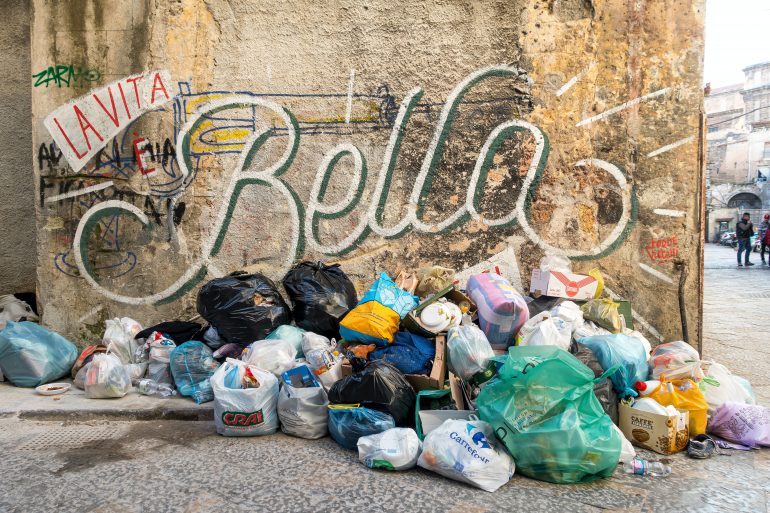 Garbage on the street corner in Palermo, Sicily. Photo: Etienne Girardet on Unsplash.

In December 2020, we wrote that Italy was lagging behind its Green New Deal targets. However, a new report by Foundation Symbola has declared Italy Europe’s recycling leader, tallying up the continent’s highest percentage of recycled waste at both the urban and industrial level. In the field of recycling, not only is the country beating other European countries, but it’s beating its target set for 2025 too.

Not a bad effort for a country that consistently underestimates its green credentials. And yet there’s more. Italy has recorded the EU’s fastest rate of improvement in the proportion of goods made with recycled materials, with 18% of products are being made from recycled materials.

Great news. But is good recycling enough? Here, we’re taking a look at how Italy is really doing when it comes to concrete steps toward sustainability, through Italy’s business, its innovation and research, and its circular economy.

11.2% of material resources used in the EU come from recycled products ♻️

Let’s start with business. The data from the Symbola survey highlighted some positive outcomes for companies aiming to make their operations more sustainable.

It showed, for example, that those businesses that did invest in the green economy performed better than those that did not. It also showed that the same green businesses would be better able to provide more jobs in the future, and will report a lower loss caused by the pandemic (a 8% decrease in turnover, compared to companies that did not invest in green economy with an average loss of 14%). These ‘green’ companies, interestingly, also tend to have younger CEOs.

While we should not deny the positive outcomes of these improvements, though, there is still a long road to go and some questions that need to be raised. Companies that invest in a green economy, for example, could also determine how sustainable their supply is. For instance, what about companies that outsource their social and environmental impact? These sorts of details are not addressed in Symbola’s research.

In Italy, the recycling chain is worth over €70 billion and employs over 213 thousand people in its entirety. By 2019, the process itself has also shown improvements of +8.7%. New innovative processes have been introduced alongside new means of governance that have changed how companies look at their internal production lines.

While these processes have improved, innovation has proceeded more slowly in Italy, where less focus and financial support has been given to the research and development sector than in other countries. The current policy from the Italian Ministry of Development, for example, has been judged ‘insufficient’ to compete with European countries, although further tax incentives and funding to worthy universities seems to be improving this state. As Trento’s School Of Innovation has recently stated, “the economic crisis and budget cuts have restrained the country’s ability to invest in research and education. Moreover, Italy’s business environment is stifled by complex bureaucratic procedures and new companies such as startups have difficulties entering the market.”

On a more positive note, €19.2 billion are now earmarked from the Recovery Plan for education and research. As, back in 2015, the European Commission declared that eco-innovation and circular economy could be key to relaunching the Italian economy, maybe this money can be put to good use.

Finally, circular economy. It’s a fundamental part of a country’s green plan. Its main objectives are to close material loops, to ensure that any waste produced is reused, to reduce energy consumption, and to eradicate other forms of polluting consequences that occur in the supply chain.

In Italy, circular economy generates a turnover of €25 billion (1.4% of the GDP) and employs 200 thousand people. In 2018, these procedures enabled industries to avoid 4.4 million tons of CO2. Italy’s results are a positive factor not only in reducing the waste produced, but in lowering the quantity of raw material needed, and, in turn, lowering carbon dioxide (CO2) emissions.

Symbola’s report highlights 5 directives that can result from the investments provided by the Recovery Fund: improving the circularity of industrial chains and improving waste management and technology; decarbonizing productive cycles through a progressive energetic conversion; creating bio-based, recyclable, and reusable products; investing in digital innovation; and, finally, optimizing logistics for secondary material to reduce the need to transport material.

La (not so sustainable) bella vita

According to a brief recap in 2020 by the European Commission on Italy’s results, it seems that we are only now realizing how slow we have really been going when it comes to the environment.

Although Italy has greatly decreased its carbon emissions, it is still below the European Union average. Furthermore, its current policies will help reduce emissions only by 27%, compared to a 33% that it agreed in the Green New Deal. Plus, there are still 2 ongoing procedures regarding Italy’s infringements of EU regulations regarding waste management and a further 17 for environmental damages.

Meanwhile, the process for updating the country’s systems (such as the plastic tax) are still ongoing and the pandemic has slowed these down even further, while directing some attention away from the issue of sustainability.

We don’t want to add a negative tone to the positive results obtained so far. Rather, we hope that Italy can improve even further. One single positive result, such as Italy’s recycling record, won’t resolve the climate crisis alone. With COP26 taking place in November, this could be the decisive year for our planet. And Italy could do a lot more.