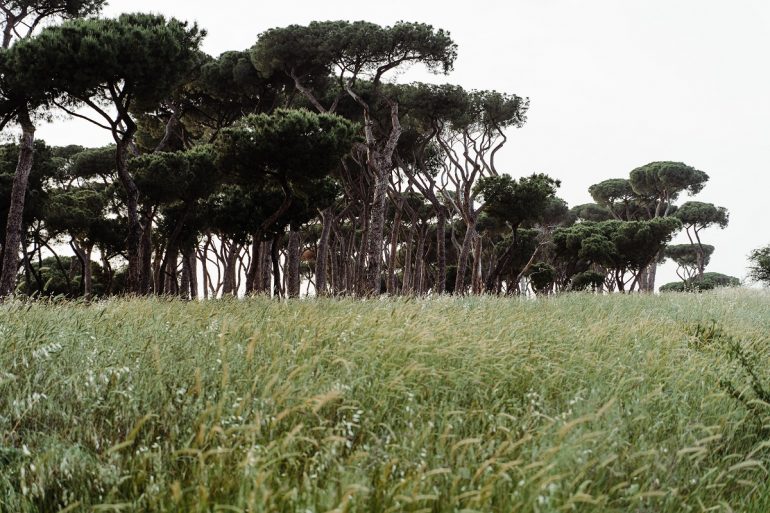 The Pineta Acqua Rossa at the Lido di Ostia thins out as it moves west toward the Tevere, so that by the time it approaches the Via Tancredi Chiaraluce, there are just a few constituents who are anywhere near the river, tucked in here and there as they are among the light industrial establishments of the area: the water purification plant, the building center, the yacht service. Between these few scattered and lonely souls stretches a vast expanse of green, a lovely open field that provides access to bright sun and wind as much as the densely populated park provides shelter from them.

The days were on the saddle, as they say, between November and December, so within the next two weeks or so, maybe a month, when winds were usually at their strongest, would be the right time to make a move. It was the best time of year, as everyone in the park knew, for those who were looking to get out, for it was then that a number of factors coalesced in such a way as to offer the best chance of success.

Of course, when they said ‘looking to get out’ they were referring to future generations. Those who were actually in a position to do anything about it would be planted in place forever, as was the case, as always had been the case, and as always will be the case. It would be possible, theoretically, for some great storm to rip a tree from the ground and send it flying several meters or miles, where it might just possibly take root again, but such an occurrence would surely be so violent as to make the survival of the tree, let alone its successful replanting, unlikely, so the idea was seldom discussed seriously or held with any real hope by anyone. Whenever the topic emerged, most members of the park remained silent, as much out of a sense of decency as out of a desire to steer the conversation in a more mundane and pleasant direction.

The time was ideal not only for the force of the wind, or even mostly for the force of the wind, which to tell the truth was not so much stronger in winter than it was at other times of year, but for the direction in which it blew, from north to south, or nearly so, perhaps a bit tilted to the west, which combined with the peninsula’s opposite slant across the Mediterranean, could produce just the right force and orientation needed to send a lucky cone dancing across the hard pavement and into the murky river which, despite its normal indolence, usually flowed with sufficient speed to carry the fugitive strobilus to freedom, or at least freedom from its current place, as unknown and perilous as its newfound condition might be.

Still, they concluded, everything should work, because after all the distance was not great, and impediments were few if any. They did not need an especially fast river to carry their offspring to safety, just a sufficient one. True, the midwinter timing offered the advantage of a rainstorm, or maybe even runoff from melting snow given how strange, distressingly strange, the climate had become of late, that would speed the pods along, but too wet was not a condition to be sought either, because closed up against the inclement forces, and sodden with rainwater, the escapees would be unable to take full advantage of the wind that was their real ally in this scheme. The Bora liked to blow dry as well as it liked to blow wet, so there was no sense in waiting or wishing for a wet patch over a dry one.

Dry, brown and fully blossomed, that was the way to be, as open as possible with every bract and scale flared to their fully extended position. This condition would offer not only the best form for catching the wind, including local eddies, but also the ideal shape for rolling across asphalt, hard packed dirt, and perhaps even closely trimmed grass if it were encountered. It also offered the better option for successful navigation, although the open position did put the seeds at risk. But no matter, after a bit of immersion, the cones knew to close up and hunker down until drier conditions prevailed. It was if they were designed for such a dangerous journey. It was as if this yearly ritual was in their blood, they would say; they were born to do it.

Anyone was welcome to try of course, even in summer. It was generally agreed, however, that those who stood closest to the water had the best shot at success. So prevalent was this belief that it even seemed to build an expectation, such that those who lived nearest the water felt a sense of obligation to let at least a few of their offspring go every once in a while, or at least once in a life time. Such were the duties of their class and of their race. To have grown to maturity without ever having sent one of your own ‘down the river’ was still looked at as something of a failure, although the prevalence of this attitude changed according to the tenor of each era. These days, life in the park was still generally stable, but with all of the changes, in the climate at the macro scale as well as in conditions more locally, economically and politically, the pressure on some to take a chance to escape to a better life, if not just for themselves but for the group as a whole, tended to grow greater with each passing year. Things just were not the way they used to be.

And so it happened. Someone by the river made it in, almost by accident, dropping and then rolling immediately to within a yard or so of the riverbank. A murmur of excitement arose as the news spread, but then it died down as progress stalled without a stout enough breeze to push them to success.

There was some concern as always that those who lived in the marina, on the edge as they said, were always the ones to make the greatest sacrifice, and this year like every year, the others who lived more inland promised that next year they would do their duty. But this was always the way. Before too long, the wind picked up and sent the little cone dancing, and finally to roll, in a somewhat comical way, far enough into the river to become waterborne. To see the little cone bobbing along on the way to the great unknown caused such a stir of excitement and celebration, that any talk of next time soon gave way to silent awe as the others watched one of their own actually doing what so many had merely talked about, even though it was a scene that all but the youngest had observed many times before.