Is it possible for one person to capture the wholeness of a city in a single instant? 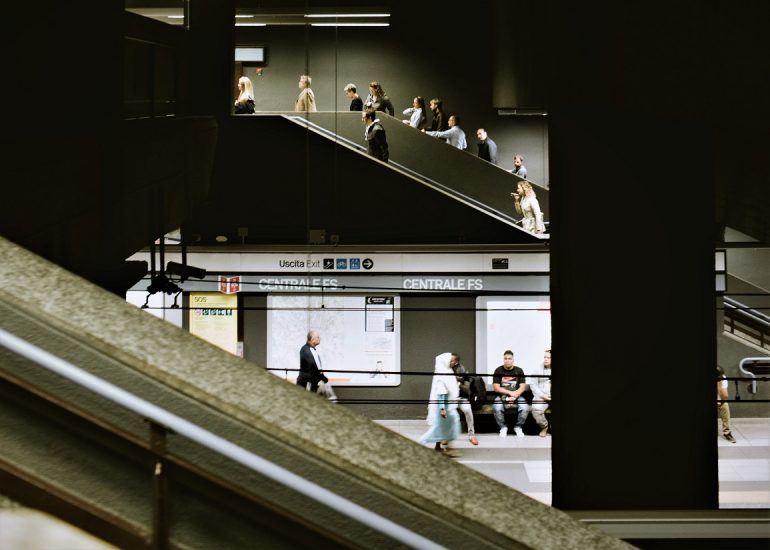 I cannot tell you how many times I have descended onto one of the platforms at Milano Centrale, always stiff, hungry and dehydrated from a long journey, typically returning from a trip to the Alps or, at times, on the outbound leg of a round trip between the mountains and the city, passing by the glorious lakes somewhere in the middle, and always with some luggage in hand or slung over my shoulder: a big pack or maybe just a small backpack, often a carryon that had a shoulder strap and could also be converted into a backpack. In fact, this was my usual piece of luggage for many trips, taking me from the thin air of a small agricultural village in the Valtellina, past Lago di Como that shimmered blue in the sunlight, into the industrial hinterland of Milano, and then into the heart of the city itself, the sight of the series of canopies that marks the station entry and departure point more resonant for me than even the smooth stone glory of the station itself, the grandest instantiation of that curious strong suit of Italian fascism, its architecture. This scene, this arrival, is carved into my mind and, after so many iterations, even into my body, the muscle memory of my shoulder tensing against the ghostly weight of the strap whenever I recreate the scene in my mind.

But there is one image that sticks in my mind that captures the essence of the station, and of Milano itself, more than any other, and it is the product of only one brief instant, one that lasted no more than a few seconds. It occurred within the typical envelope of arrival: the gradual gathering of passengers toward the nearest door, the more nervous riders getting there first, typically anxious tourists struggling with their luggage, while the cooler pros, the bored urbanites, wait until the last minute, either not seeing the need to get in line or not wanting to throw themselves in with the throng of neophytes.

I am always in the former group, always nervous, always brimming with anticipation, never wanting to be late or fail an obligation, always impatient, always wanting to get to the next step. What was the obligation? To be ready to depart, to have all of my things in order and well strapped for the most efficient ejection, the launch into the mix, the streams of passengers that poured out of the series of portals and into the massive river that flowed toward the exits, onto the next leg of the journey, and ultimately to home, wherever it might be on that trip.

You have to be ready at the door, if you are the first in line, attentive to the mysterious and unpredictable series of hydraulic machinations that power the doors open or closed, signaled as they are by a sequence of whooshes and clicks, of electronic tumblers and latches releasing and opening, of pistons being charged, of tubes being filled and emptied with viscous fluid. If you miss your mark, if you are slow to do your part, because it is not enough for the train to run its routine, the first in line, the passenger closest to the door, has to push a stiff button or lift a tight lever to make the door, finally and ultimately on its own schedule, lurch out and to the right, its black rubber bumpers separating, sometimes just enough for you to slip your fingers into the gap and force it open all of the way, or enough to squeeze your luggage encumbered frame through the opening while at the same time negotiating the set of metal grated steps that descend at an aggressive angle, and often slick with snow and rain, to drop you on the platform, anxious and impatient viaggiatori at your back.

There is always one snag, however, or multiple snags. Not everyone jumps off so smoothly into the flowing river. Other needs, other exigencies, well up and must be satisfied as soon as the threshold is crossed, from carrozza to binario. Bags slip off shoulders, shoes need tying, jackets get buttoned and zipped, scarves need wrangling, telefonini need answering or dialing or checking or tapping.

And then there are cigarets, and this is what made my memory that one fateful day, several years ago. I can still see her now, even more clearly than when I saw her the first time: a woman, in her late forties, short hair dyed a dull black, matching black boots that went nearly to her knee, some kind of quilted coat of a color I can no longer remember, purse slung over her shoulder, scarf knotted tightly around her neck in the Italian way — it always seems to be winter in these memories — standing in three quarter profile to me, cigaret in her left hand and cheap disposable lighter in her right, and then the flick flick flick until the flame leaps up and illuminates her face, showing every one of those forty plus years in the lines around her eyes and in particular above and around her lips, which were pursed to draw in the flame.

And that’s it. That is Milano for me. Something in that woman, in that instant, in that one simple gesture, something that she no doubt had done thousands of times before, captured an entire city for me: its mood, its meaning, its attitude. What strange economy of mind weaves such resounding and reverberating significance from one random observation born of a purely accidental and otherwise inconsequential encounter, one that did not rise to the level of a meeting but that can be counted only as the merest of coincidental contacts?

I have countless memories like these swirling in my head constantly. I frequently compound them by laying on top of them a second image, a second scenario, one where I go to visit the people of these encounters, these complete strangers and say: Do you remember? Do you remember that time when you got off of the train in Milano Centrale, and you stopped to light your cigaret, and I was right behind you, and I saw the flame flicker up and illuminate your face, and how in that instant you captured for me the wholeness of the city, of its energy, its substance, the complete essence of it?