The Revolutionary Power Of Bella Ciao

How a national folk song became the anthem for the hopeful around the world. 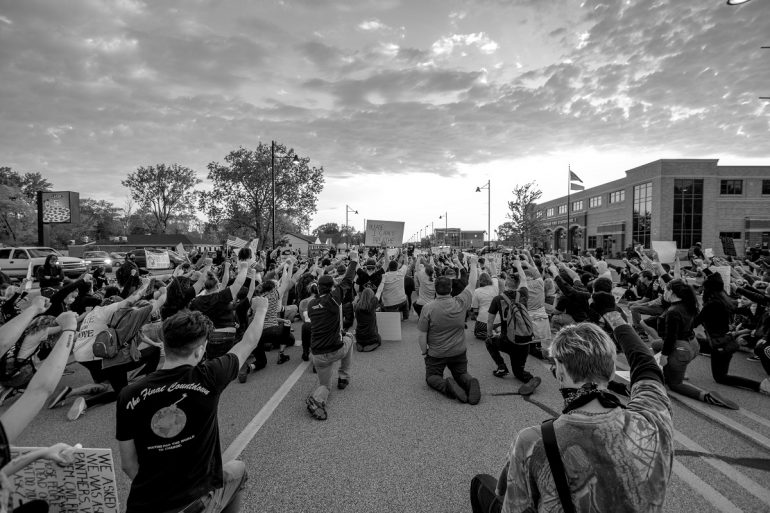 Protests in the US. Photo: Cooper Baumgartner on Unsplash.

History is often filled with unlikely stories of even more unlikely heroes, and we never quite know which of these will stand the test of time and be passed down over generations. With a long history and later adopted by partisans during World War Two, Bella Ciao has since become one of the most famous Italian songs in the world. From a cry against working conditions to a symbol of rebellion against the fascist regime, its words and meaning have been adapted to different contexts. The song’s visibility recently increased when it became part of the popular Netflix series Money Heist sung by the characters to embolden themselves for the heist, and to celebrate victories. This interpretation is perhaps far from the anti-fascist symbolism, but it still evokes a strong sense of solidarity. With so much room to interpret its meaning, what is the real power of this revolutionary song, and how did it become a global call to action?

The origin of Bella Ciao and its international reach

Like many things, there are different versions of the origin story of the song, and ambiguity always encourages a bit of hyperbole in the retelling. Some say it’s a mix of ancient lullabies from Northern Italy. Others say it was a tune sung by Italian women who worked in rice paddy fields to fight the back-breaking fatigue of their labor. What is certain is that it gained national and international fame after Italian liberation in 1945. Early on, the melody began to associated with the partisans’ movements, even though the National Association of Italian Partisans stated that Bella Ciao was not one of the official anthems of the movement, but sung only by some fighters and only in certain provinces.

But the affiliations of the folk song grew, and in so doing took on a new significance around the world. By 1947, a group of Italian partisans apparently played it in Prague at the first festival organized by the World Federation of Democratic Youth, an anti-fascist youth organization inspired by communist values. This first step marked the growth of the international dimension of the chant.

As revolution swept across the globe, so too did the song that quickly became identified as the anthem for activists, protestors, and the oppressed. It was chanted during protests in Catalunya against Franco’s regime, and around the world during the countless protests in 1968. Over time, its meaning has only grown and a new generation of resistance has taken it up as their own battle hymn. Bella Ciao was sung during the Occupy Wall Street manifestations in 2008, the protests in Taksim square in Istanbul in 2013 during the Gezi Park demonstrations, and the recent protests of farmworkers in Punjabi, India. All told, the song has been translated into more than 50 languages and been the refrain in countless struggles for justice, equality, and freedom.

However, Bella Ciao has transcended the sphere of organized protest, and become a symbol of courage and solidarity in a host of different contexts. After the terrorist attacks at the offices of the French newspaper Charlie Hebdo in 2015, Bella Ciao was chanted by the crowd at the tribute for the victims. More recently, it has been remixed with the song Do it now by the Fridays For Future movement to promote the initiative called ‘Sing for the climate’, with the lyrics altered to address the fight for climate justice:

Of course, the song has also made its way to the zeitgeist, from everything from films to football. Its real resurgence came in 2019 with the Netflix TV series La Casa de Papel (Money Heist). The centrality of the song to the main themes of the series and the way that it has been utilized to capture the spirit of the characters has transformed it from cult status to Spotify mainstay.

What makes Bella Ciao so revolutionary?

It seems that the mysterious origins of the tune and verse that reference universal political ideas allowed Bella Ciao to be adapted to a range of contexts. The song revolves around love, death, and freedom: the very essence of inclusivity. The lyrics and language may change but the message remains the same. It’s no wonder that the song has become a constant hymn in protests, public manifestations, strikes, and political festivals around the world.

In Italy, Bella Ciao still holds considerable cultural capital. It is sung or played every April 25th during commemorative ceremonies of Italian liberation. But it is no longer reserved for the battles of Italian workers’ unions or emancipations protesters. It was performed last April 25, symbolically expressing solidarity during the worldwide pandemic. In this particular circumstance, the song assumed another role, representing a collective feeling of hope and desire for freedom and rebirth. In Italy, as in many other countries, Bella Ciao has been transformed into a symbol of solidarity with anyone fighting against an oppressor. The oppressor may be a political actor or regime; it may just as likely be a metaphorical one like terrorism, or a global pandemic. The song always seems to capture the same desire. Hope.

Thanks to the perennial themes of independence, liberation and struggle, the song has been adapted and used to overcome political divisions and extremisms. Despite its humble roots, Bella Ciao has become one of the best-known Italian folk songs in the world. The unique power of its simple melody energizes, motivates, and inspires millions. The force of the chant whose roots are firmly located in the Italian historical and revolutionary heritage has been given new life by modern fights for freedom and justice. No matter its origin, Bella Ciao has become a universal call and a cultural touchstone for the entire world.