Chiara Meloni and Mara Mibelli, founders of Belle Di Faccia, discuss their newly published book and why we need to “make riots, not diets.” 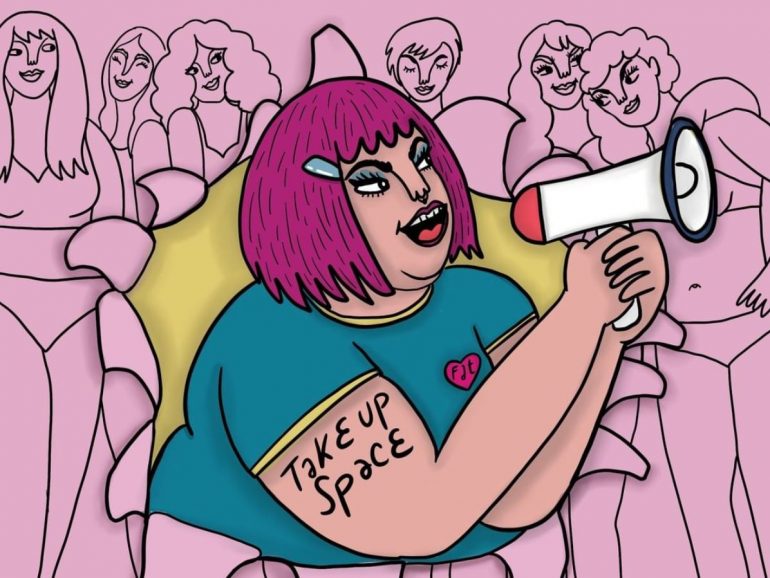 Chiara Meloni and Mara Mibelli, founders of Belle Di Faccia, discuss their newly published book and why we need to make riots, not diets.

The debate over body-shaming has become an international issue, and the damage that results from it is becoming ever more visible. In particular, our increased reliance on digital communication has, in turn, increased our awareness of the importance that social media posts can hold, where even a simple app or filter can edit a photo into something nearly impossible for mere mortals to attain. If you have Photoshop, you can create an entirely new body online; other programs will erase imperfections automatically and in so doing, erase our understanding of what we can and should look like. Certainly, there is no harm in wanting to look better. But what do we do when ‘better’ means unrealistic social standards unbearably placed upon us?

Expectations of physical appearance have gotten so extreme that Italian influencer Chiara Ferragni was compelled to call out the acclaimed newspaper Corriere Della Sera for describing her bridesmaids as “round and happy” in a photo she posted on Instagram to celebrate her marriage to rapper Fedez. If even Chiara Ferragni and her famous friends get criticized for their figures, what hope do the rest of us have?

The answer is, thankfully, that we do have hope. Chiara Meloni and Mara Mibelli, authors of Belle Di Faccia: Techniche Per Ribellarsi Ad Un Mondo Grassofobico (Beautiful Faces: Techniques To Rebel Against A Fatphobic World), are fighting against this tide and giving real advice for the real bodies we have. According to Meloni and Mibelli, “freeing ‘fat’ bodies is about feminism, a little bit about self-love, and a lot more about a more social justice and the creation of societal inclusion.” They are also founders of Belle Di Faccia (Beautiful Faces), an organization that promotes fat acceptance and body positivity.

Chiara and Mara demonstrate that fighting against any kind of discrimination means involving even those who do not consider themselves directly affected. It is not just a matter of accepting ourselves: we need to build a society that accepts other beauty standards without judgment or discrimination. It is not a cliche to say that it is not our size that matters but who we are as human beings and the values such as respect, acceptance, love, health, and happiness that we cultivate. To quote Chiara and Mara, “let’s make riots, not diets.”

How did the Belle Di Faccia initiative come to life?

We have been friends for over fifteen years and we are fat as well as feminists. After several years of engaging with the world of body positivity and fat acceptance, we began talking amongst ourselves about fatphobia and how mainstream body acceptance was excluding fat bodies while highlighting the importance of the movement. We then decided to open the dialogue on social media to discuss it and exchange opinions with other users. In December 2018, we officially opened the Belle di Faccia Instagram account.

What pushed you to write the book and how important was it to include illustrations to capture the theme?

There was not enough space in Instagram captions to say everything we wanted. We thought of writing a book that could introduce this topic, well aware that in Italy books on this topic are practically nonexistent. Illustrations had always been part of our work since the beginning, therefore it only felt natural to include them. It has allowed us to accompany concepts, describe experiences and different body types without placing our image in the centre of the narrative. Illustrations are essential to represent fat bodies.

Which is the most important message you wanted to transmit to readers who have experienced fat-shaming, as well as to those who never have?

The idea is to give fat people, especially young people, an instrument that we would have loved to have had while growing up. It’s important to understand the origins of fatphobia as well and how deeply ingrained fat stigma is in our society. This is fundamental to free ourselves of that sense of guilt and inadequacy that always seems to stick to us around the topic. For everyone else, we hope that through this book they understand the difference between problems with physical appearance or self-esteem and systemic discrimination. Our hope is to provide the tools to deconstruct this prejudice and eliminate fatphobic language and behavior from our society.

Which has been the feedback from publishing your book?

We have had surprising reactions. Those we find most touching are from people thanking us because they saw their own experience reflected in the book. There are also many who have thanked us because they had not been aware of the roots of fat stigma and had therefore learned something from reading about it.

What are the main causes of fatphobia that you discuss in the book and how does it differ around the world?

Unfortunately, when it comes to fat bodies there is little difference between countries because fatphobia is deeply rooted in each one of us and is reinforced by media, advertisements, diet industries, family, and the medical community. Surely, without well-researched literature about fat acceptance and its movements, like our book, it is harder to spread awareness about the real forms of discrimination that fat people face: we are judged, considered guilty, and therefore it becomes logical to marginalize us. In the United States as well as in the UK and other European countries, activists and academics who concentrate on fat studies are fighting for the liberation of fat bodies. Experts in these countries have been studying fatphobia for decades so of course, the conversation abroad is more evolved. Italy still has a lot of work to do in this field.

What do you have planned for the future?

We are currently busy presenting our book, which was just published two months ago. However, we are thinking about starting a podcast, but its still in the dreaming stages of planning.

The interview has been edited for clarity.