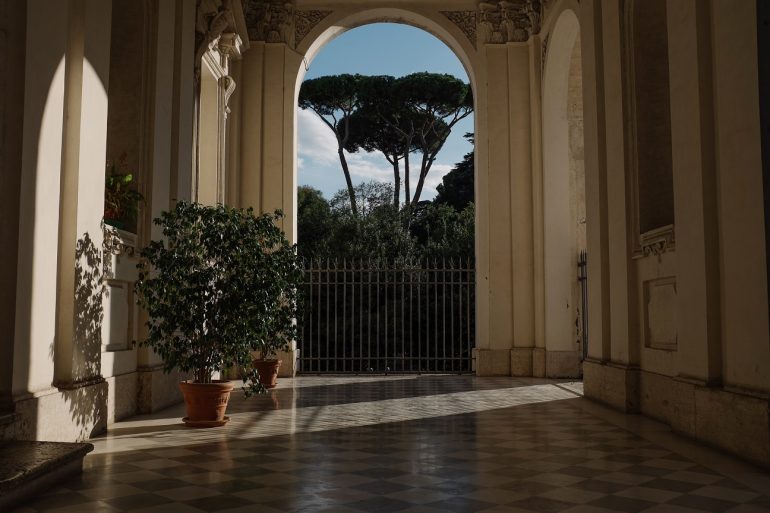 Dr Sofia Mancini gently tilted Chiara Corinto’s head away from her to get a better look at the student’s right ear.

— Did you get hit by something? Dr Mancini.

— I think a bird flew into me. Chiara.

— Where did this happen? Dr Mancini.

— Just outside the park, across the street. Chiara.

— Well, the skin is not broken, but I am worried about your getting an infection, so I will put on a little antibiotic cream and you should keep your eye on it. It it gets red, hot or swollen, especially at night, come see me again. Dr Mancini.

Chiara nodded her compliance, sat up and straightened her shoulders, adjusting her hoodie.

Dr Mancini extracted a pine cone from Chiara’s hood and showed it to her.

— Did you know that that was there? Dr Mancini.

— I think I know what happened. Do you think this is what hit your ear? Dr Mancini.

— I don’t think so. I think it was this. Were you standing under a pine? Dr Mancini.

— Well, I will give this back to you and you can do what you like with it. Dr Mancini.

Dr Mancini handed the pine one to Chiara, along with a small tube of antibiotic cream.

— Put this on your ear twice a day for a week. Dr Mancini.

Chiara nodded her assent, collected her things, and left Dr Mancini’s office. Crossing Via Venezuela, she returned to the place where she hurt her ear, and thought for a moment about what to do with the pine cone. She thought about what an odd thing it was, unlike anything else — not an apple, not an armadillo, not a porcupine, not a pineapple, not an avocado — like those things but not really like those things. As Chiara stood standing near the tree where the cone had hit her, her friend Giulia came up behind her and called out to her.

— What are you doing here? Giulia.

— I am returning this pine cone to the tree it came from. Chiara.

— This pine cone fell from the tree and hit me on the ear. Chiara.

— Yes, I am fine. I just come from Dr Mancini. It is just a little red. She gave me some antibiotic cream and told me to see her if it gets worse. Chiara.

Chiara turned her right ear toward Giulia and pulled her hair back a bit so she could see it.

— It looks a little red. Giulia.

— Not really. It just throbs a bit, and maybe it is a bit sensitive to the wind. Chiara.

— When nature wants your attention, it knows how to get it. Giulia.

— Is that a saying? Chiara.

Chiara looked at the cone in her hand.

— What will you do with your cone? Take it home? Giulia.

— I don’t think so. I am just going to give it back to the tree. Chiara.

— I think it wanted you to have it. Giulia.

— Probably, but I think it will be happier here in the park. Chiara.

Chiara walked to the tree she thought the cone came from and placed it at its base. She then returned to where Giulia was waiting on the sidewalk, and the two decided to walk together for a while since they were both finished with their studies for the day.

— Not really. They are kind of pretty, but they are strange, and so spiky and sharp. Chiara.

— Sometimes. Sometimes they are green and all closed in tight. Giulia.

— True, but I dislike those even more. They don’t really seem like pine cones, and they seem more like some other kind of thing you would find on a tree. Chiara.

— Yes, they are weirder when they are all dried out and open. Giulia.

Giulia and Chiara continued to walk through the park.

— Not really. I don’t like evergreens. I prefer deciduous trees. Chiara.

— Those are okay. More like beech. They are very beautiful. And birch. I like their bark. Chiara.

— Yes, but also their shape, especially the beech, but not so much the birch. Chiara.

— The pines have a nice shape. Giulia.

— That’s true. I guess that’s why they are so special. Chiara.

Chiara and Giulia continued to walk. They were now at the Villa Glori.

— Which do you like better, architecture or forests? Giulia.

— Not when they hit me in the ear. Chiara.

— A piece of a building could fall off and hit us in the ear. Giulia.

— Yes, but that would be our fault. We don’t have any control over the trees. Chiara.

— You can visit the mountains but they won’t give you anything to eat. Giulia.

— Is that another saying? Chiara.

— Buildings won’t feed you either. Chiara.

— There is usually something. Giulia.

Giulia and Chiara continued to walk, past the Villa Glori, and back into the deep shade of the trees.

— I have a question. Chiara.

— Too much chaos. Giulia.

— So it’s the people at the beach that you don’t like. Chiara.

— What about palm trees. Chiara.

— I don’t know. I have never thought about them much. I don’t even know the kinds. I like the fig tree in our garden, but it can be messy, and the birds attack it. I like the apple trees in the country where our cousins live, but maybe it’s just because they make apples, and I like my cousins, and I like the fresh air in the mountains where they live. Giulia.

— Aren’t there lots of trees there? Chiara.

Chiara and Giulia continued to walk through the park until they came to the street again, and by that time it was time for them to return to their homes.